NORTHAMPTON, Mass. — For the last several months, the Masonic Street Laundromat has served its local community in a unique way beyond cleaning clothes: it’s also been an art gallery.

In collaboration with Smith College, the laundry doubled as a gallery throughout much of the just-completed academic year. Owner Jason Foster says you don’t usually see local art showcased in laundromats, especially an unattended store like his, but he and those helping him have been able to make it work.

After graduating college with a degree in business, Foster worked in market research, first living in Shanghai, then in London. When he and his wife had their first child, they decided it was time to return to the United States, and Northampton—an hour or so from Foster’s boyhood home in Connecticut—was where they chose to put down roots.

Looking for business opportunities, Foster saw that the local laundromat was for sale. He’s not skilled mechanically, he admits, but believes he’s been able to improve the business since buying the store in January 2019. He lives close enough that he can walk there in less than 10 minutes, and visits regularly to make collections and take care of other tasks.

“It’s not a big laundromat,” he says. “Let’s just say a thousand square feet. There’s about 16 washers and 12 dryers.”

Foster favors his unattended model and doesn’t plan to add wash/dry/fold despite its growing popularity.

“I’d rather grow my revenue without having the need for an employee, or wash/dry/fold, or me doing it for them,” he says. “I would rather increase revenue by having those machines produce my revenue instead of me producing revenue with the machines.”

Foster describes Northampton, population roughly 30,000, as an “artsy and academic city.” All-girls Smith College is at its city center, just a few blocks from Masonic Street.

In early 2020, he was contacted by Amrita Acharya, a Smith College student who was studying ethnography—the customs of individual peoples and cultures—and producing a similarly themed podcast through the student newspaper. They recorded an hour-long episode about Foster’s laundry and how it’s “the perfect blend of all walks of life and ethnography of a community,” he remembers Acharya saying.

The two stayed in touch. When the pandemic hit later in the year, they chatted about its impact on his business. Then, Acharya asked if the laundry could possibly host an art show for the students’ benefit as well as his, and Foster thought it was a great idea, provided students accepted that he couldn’t fully protect the paintings, photography and drawings in the unattended premises.

“We met multiple times. She organized the whole thing and before you knew it, she was jurying art because she had more interest than we thought we had wall space for,” Foster says. “There’s about 30-plus pieces hanging on the wall now.”

And that’s not counting Foster’s “live” art piece: hundreds of left-behind socks affixed to one wall, always changing as one sock is claimed and others join the group.

The college organized the “gallery’s” opening night in October 2021, drawing at least 200 people, including student and local press. As time passed, other art pieces were introduced to keep things fresh. The exhibition ran through the academic year that just ended in May.

When interviewed a few months earlier, Foster said he was getting “at least three to five people every day that walk into that laundromat just to look at the artwork.” He hopes to build on the gallery concept and feature artwork from the community at large.

“People are coming in because it’s unique,” says Foster. 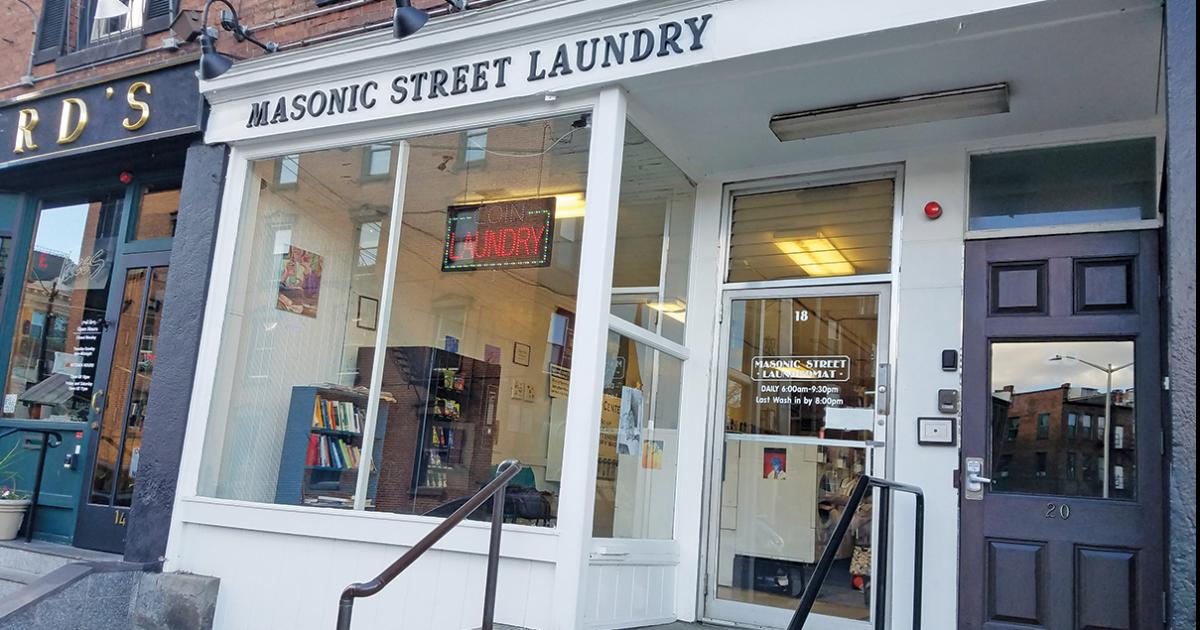 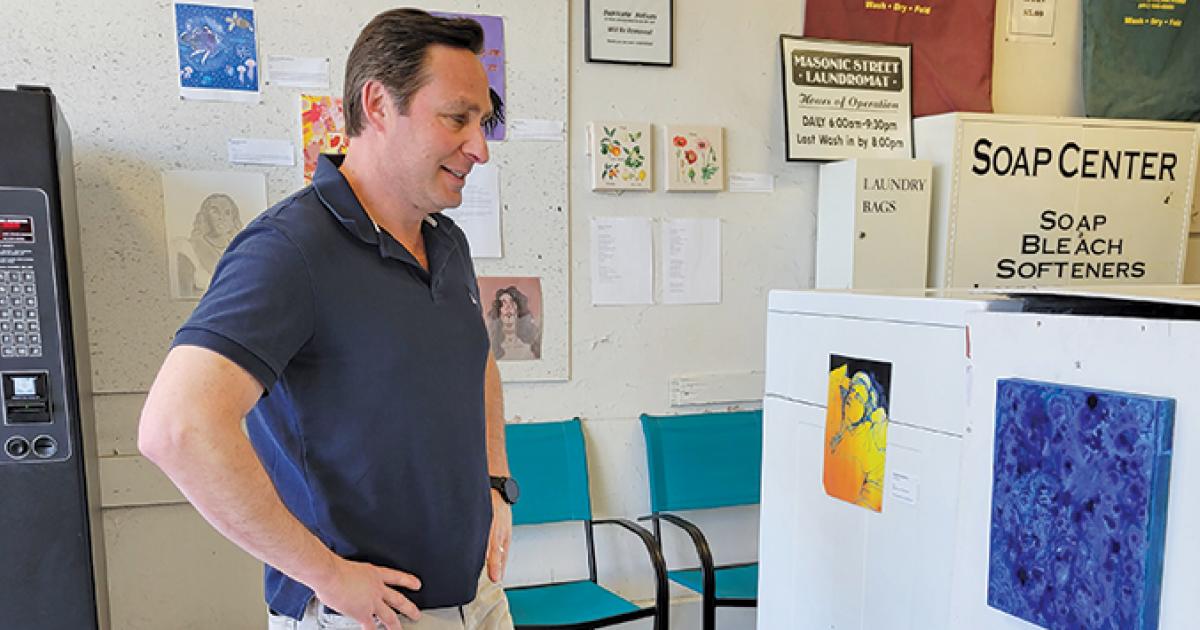 Foster takes a moment to appreciate the bright colors and stylistic choices made by the artists whose work hangs in his laundromat. 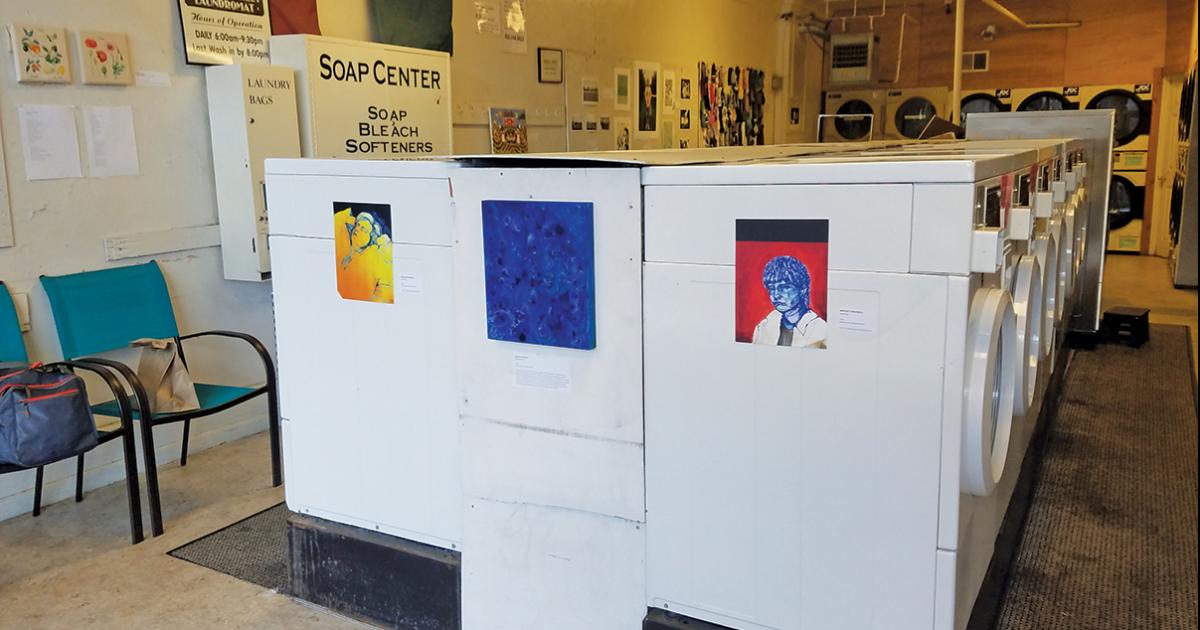 A closer look at some of the student artwork on display.