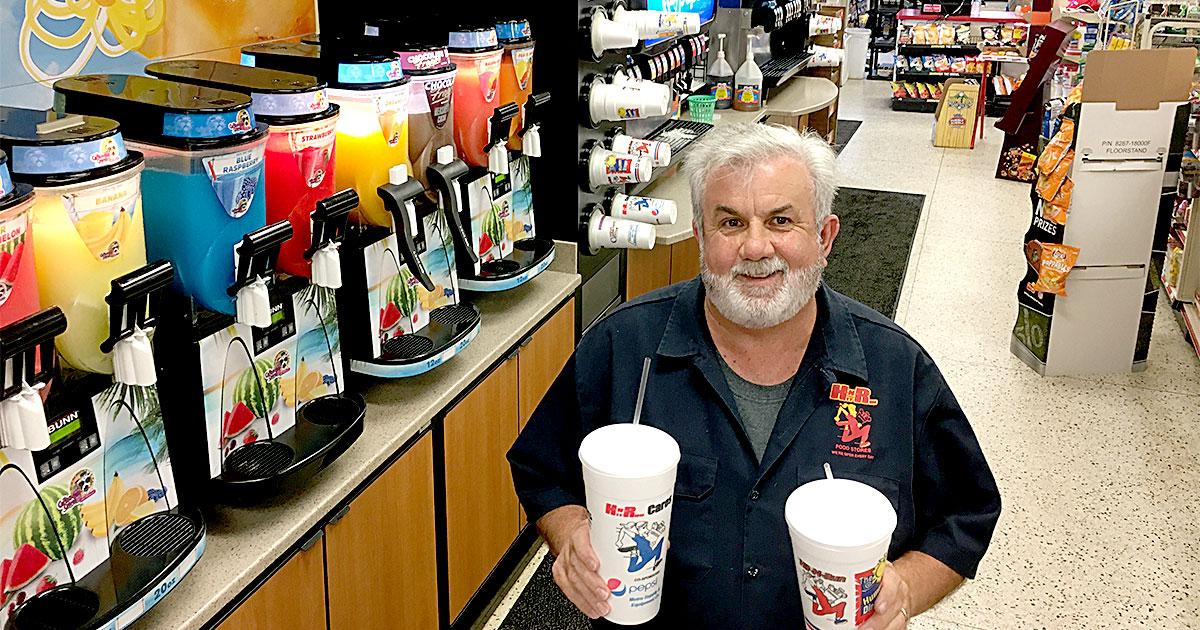 Co-owner Dwight Fowler stands near the beverage fountain area at the Bethalto Hit-N-Run. It extends from the coin-op’s interior access door to the c-store entry. The chain rings up approximately 400,000 super-sized to-go Care Cups annually and donates a portion of sales to local charities. (Photos by Laurance Cohen) 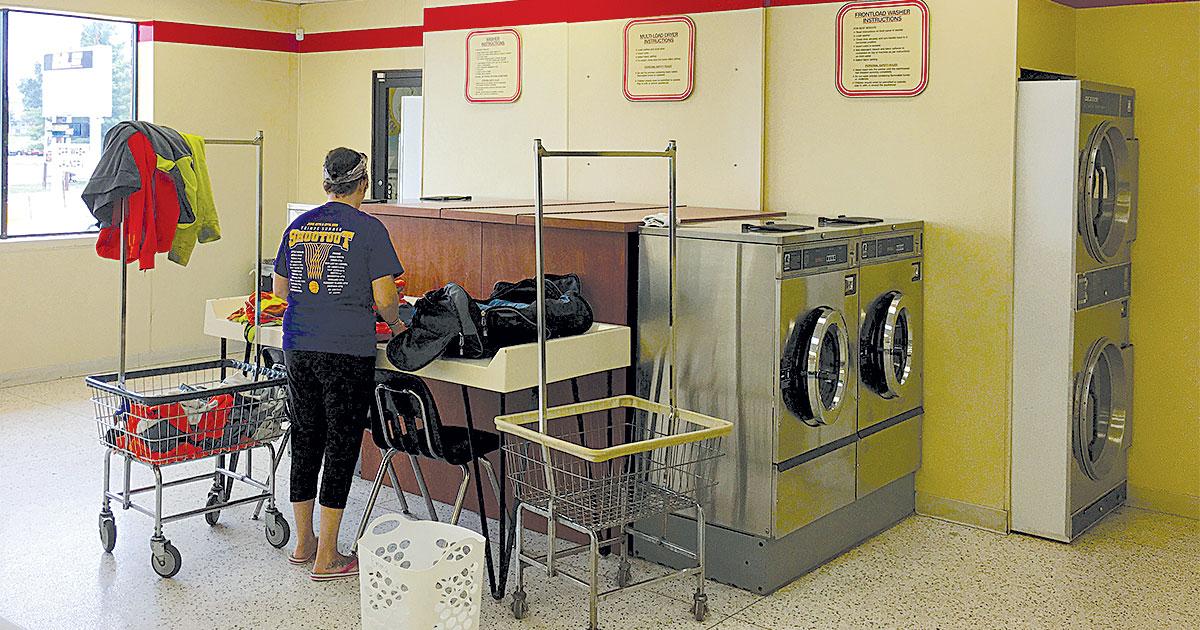 The Bethalto coin-op retains its original homestyle layout of washer and dryer islands, but was updated with an equipment mix of front-load washers and multi-load tumblers. 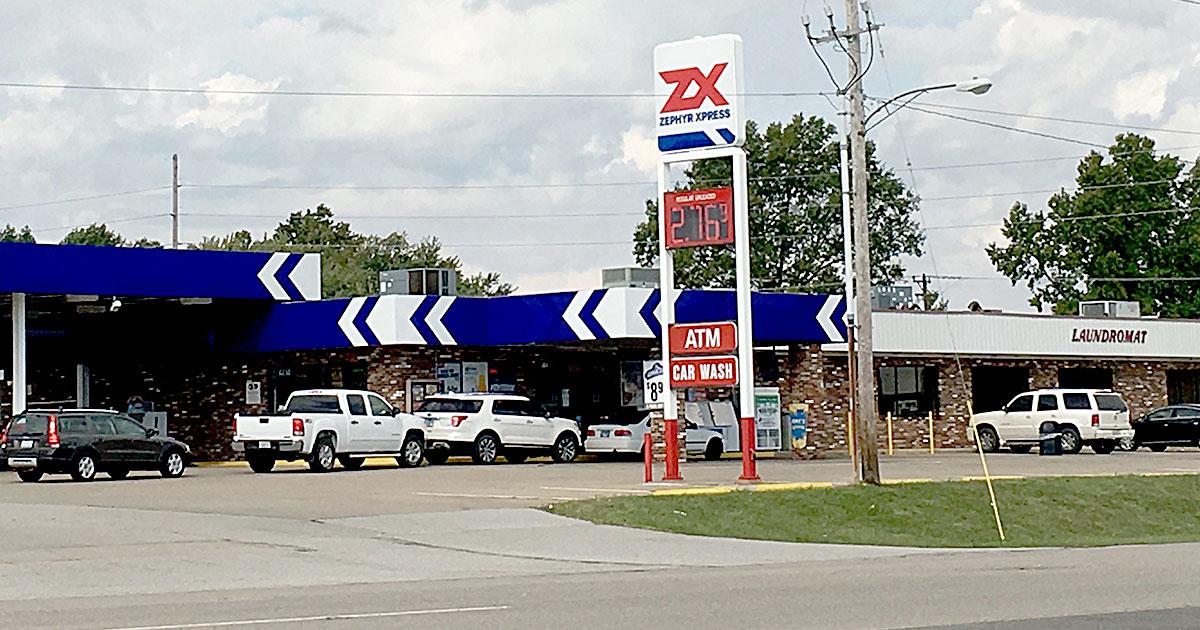 Vehicles line up for carhop service at the 3-acre flagship Bethalto site where, in addition to convenience foods, self-service fuel, laundry and car wash are on the menu. The coin-op is housed in an attached strip center and the five wash bays are situated behind the complex. 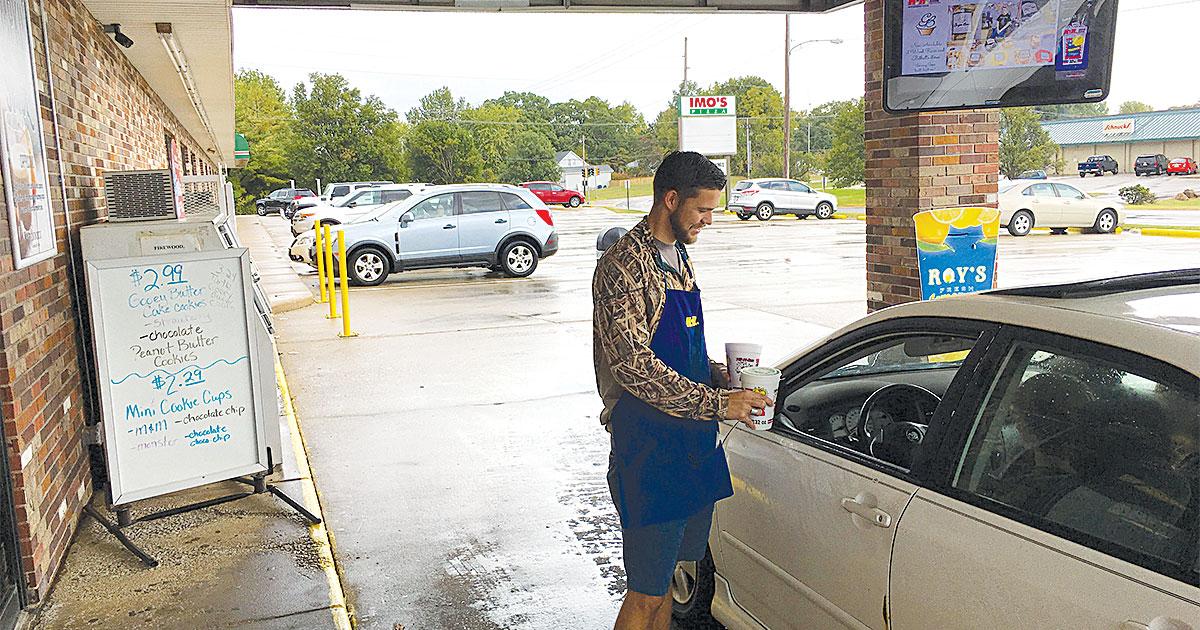 C-store staffer Sean Knight fulfills a request for a pair of drinks and delivers them curbside with a smile. Hit-N-Run’s specials are promoted in the drive-thru lane on signage and an overhead monitor.

BETHALTO, Ill. — Hit-N-Run might not conjure up a place to wash ’n dry. And all those cars stacking up in a drive-thru by the door surely doesn’t fit the typical coin-op traffic pattern.

But across the mighty Mississippi River from St. Louis in south-central Illinois, this decades-old convenience store chain backed by self-service laundries and car washes is synonymous with fueling up and cleaning up.

As we learned in Part 1, the Hit-N-Run convenience store chain is spread over five Illinois communities within a 15-minute drive of the riverside city of Alton. Its core c-store operations are complemented by three gas stations and coin-ops, as well as two car washes and slot gaming facilities.

Co-owners Dwight and Teresa Fowler secured financing to acquire the multi-faceted business and its real estate parcels in July 2017, then went about addressing maintenance items long deferred and upgrading the gas canopies to remain in regulatory compliance.

With upgrading at the core sectors nearly complete, attention is turning to the three laundries. In addition to an anticipated revamp of the Bethalto venue, the two other coin-ops — located in Alton and Wood River — are slated to be remodeled.

Boasting 22 front loaders up to 40 pounds capacity and 18 single-pocket 30-pound tumblers, the Alton Hit-N-Run laundry is paired up with the signature c-store drive-thru lane and interior passageway. The 1,800-square-foot coin-op is laid out in a 36-foot-deep footprint, minimizing steps for basket-toting patrons pulling into the ample storefront parking stalls. Dwight Fowler estimates half of his wash patrons pass through the glass doorway to satisfy their craving for snacks or drinks during a visit.

A 10-minute drive south, the Wood River coin-op is nestled between the mini-stop and a five-bay, self-service car and truck wash. At 2,000 square feet, the laundry is the chain’s largest, with 18 front loaders, 12 top loaders and 20 single-pocket 30-pound tumblers. Carhops racing to deliver drinks and packaged goods is a constant reminder of the goings-on next door.

Those looking to play the slots won’t find them near the washers and dryers. The two gaming rooms, dubbed Big D’s — a tongue-in-cheek reference to Fowler’s stature — occupy an area next to c-stores in East Alton and Granite City. The five slot machines on the floor permitted by law generate the highest profit per square foot of any sector, the co-owner reports.

While laundry revenues are surpassed at the fuel pumps and convenience stores, the division outperforms car wash bays and remains a solid anchor.

“Teresa has a real passion for the Laundromats because that’s where she began,” Fowler smiles. Cleaning duties may not be part of her repertoire, but she shares in the oversight of staffers responsible for maintaining, repairing and collecting.

The company’s payroll of 115 includes employees who served under the two prior owners, some of whom rose to supervisory posts and now team up with second-generation family members. Fowler says both he and his wife never forget their roots and acknowledge staff as their greatest asset: “If we take care of our people, then our people will take care of our customers.”

Months after assuming ownership, the couple brought back a cherished tradition of gift sacks handed out to employees at Christmas time filled with goodies donated by the company and its suppliers.

“They were thrilled to death,” Fowler says of the gesture to help spread some holiday cheer.

The communities Hit-N-Run serves also receive support, most notably donations to three local charities and seven police department outreach programs. Checks totaling approximately $24,000 — equating to 6 cents from each of the 400,000 annual consumer purchases of the 44-ounce Care Cup — were presented to the organizations recently. The c-store’s support of the projects is prominently displayed on each container.

Beverage marketing dominates the footprint of the Bethalto flagship store where the fountain area stretches from the coin-op passageway to the c-store’s entry. Customers can select any of the six styrofoam cups ranging from 12 to 44 ounces and tap traditional Pepsi-branded products along with a lineup of exotic “mix-em-up” frozen treats or flavored ice teas. The store’s perimeter offers a tantalizing array of canned and bottled energy and sport drinks inside the LED-illuminated reach-in coolers.

Everything at this enterprise is do-it-yourself in nature: self-service laundry, car wash, gas and fountain dispensing. Yet, the luxury of pulling up, rolling down the window, and letting a runner serve as your personal valet is what puts the “hit” in Hit-N-Run. Three out of four dollars in convenience sales are rung up in the drive-thru lanes, Fowler reports.

You’d think all this curbside pampering would make those toiling away in the laundry a bit envious. When I query a customer if leaving her wash to a runner would be welcomed, she waves it off, saying the chore’s easy … but she did plan to swing around and pick up a HummDinger to slurp on the drive home.