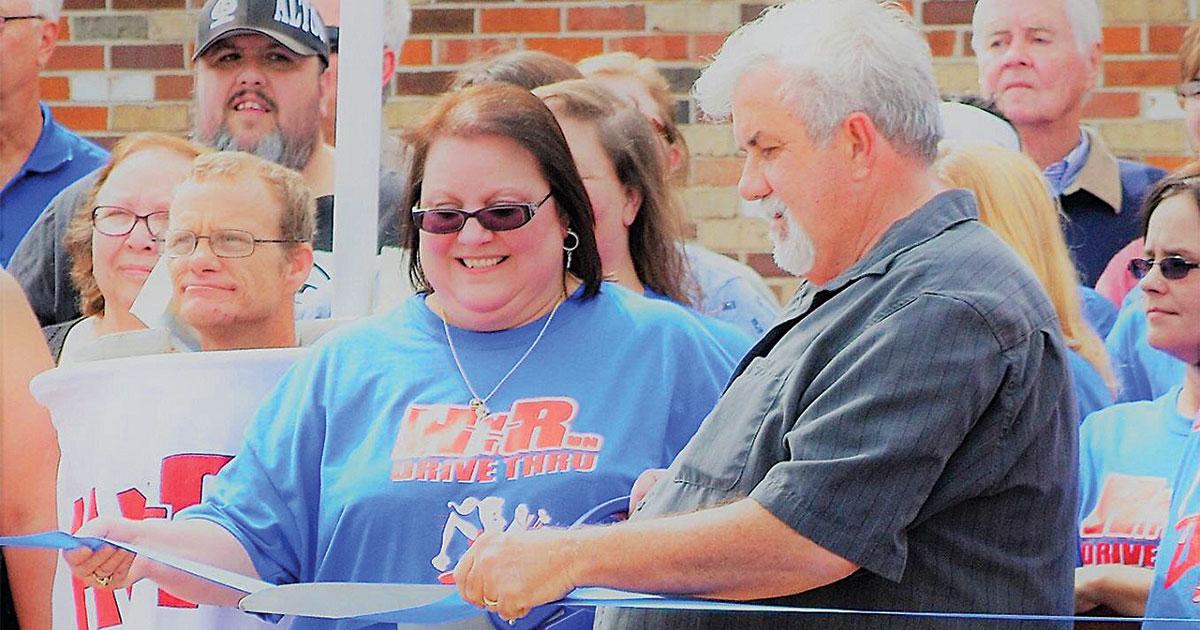 Teresa and Dwight Fowler cut the ribbon during a 2017 ceremony celebrating their acquisition of the Hit-N-Run convenience gas and laundry chain. (Photo courtesy of Dwight Fowler) 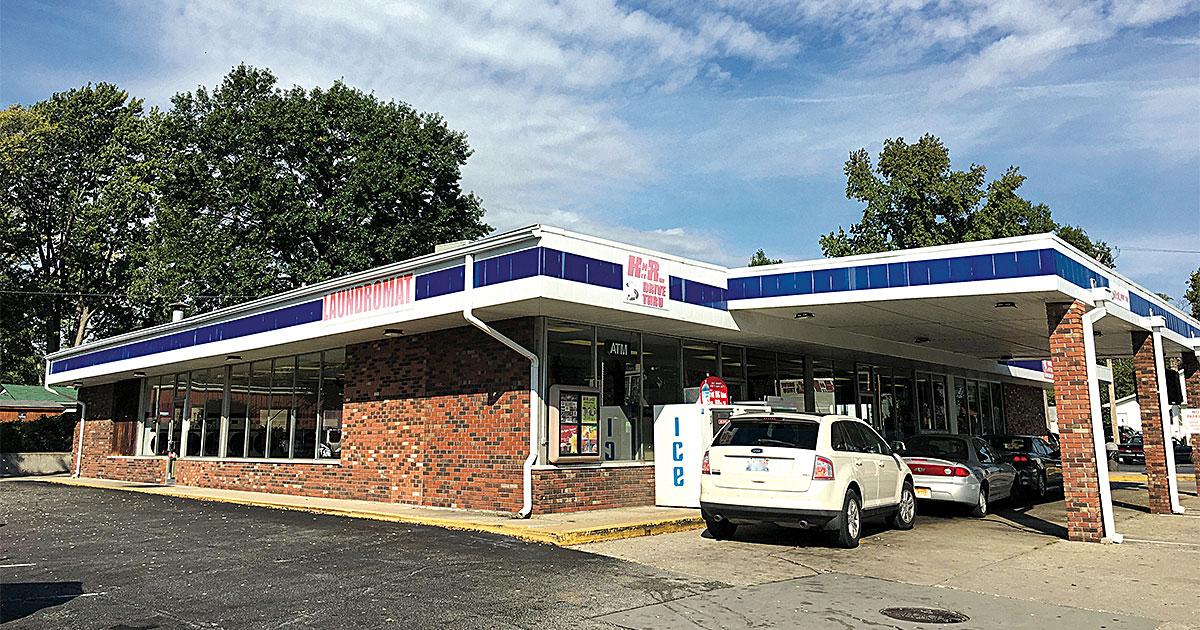 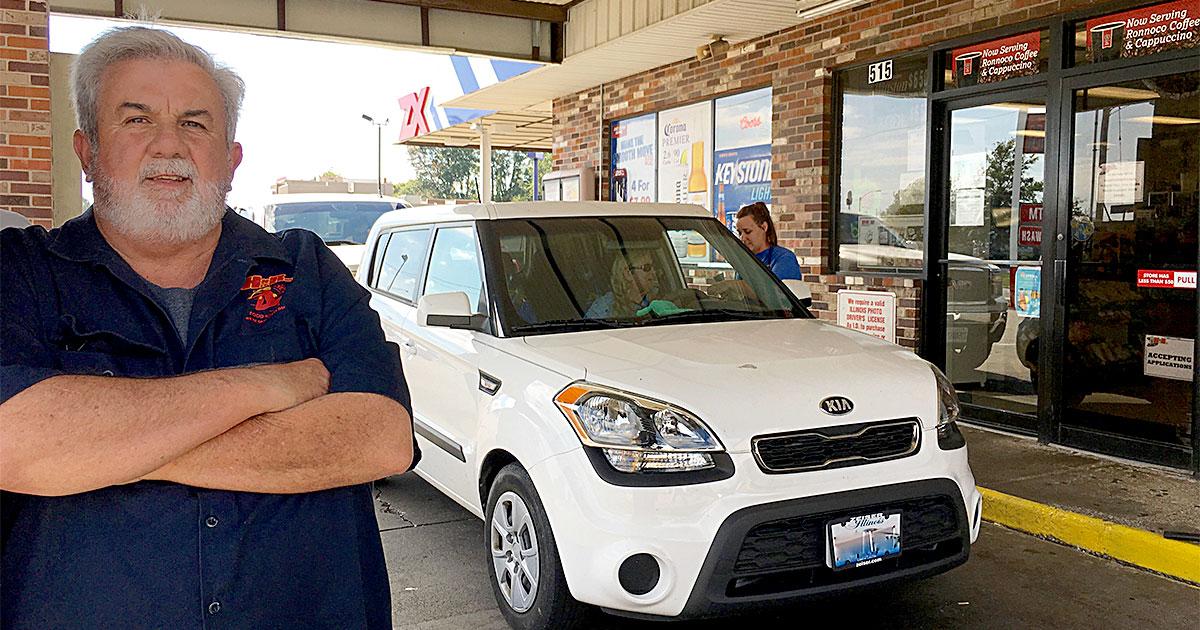 Co-owner Dwight Fowler provides the ultimate convenience store experience with a drive-thru lane where 75% of sales are transacted by staffers ferrying goods from the drink fountain and shelves to drivers behind the wheel. (Photo by Laurance Cohen) 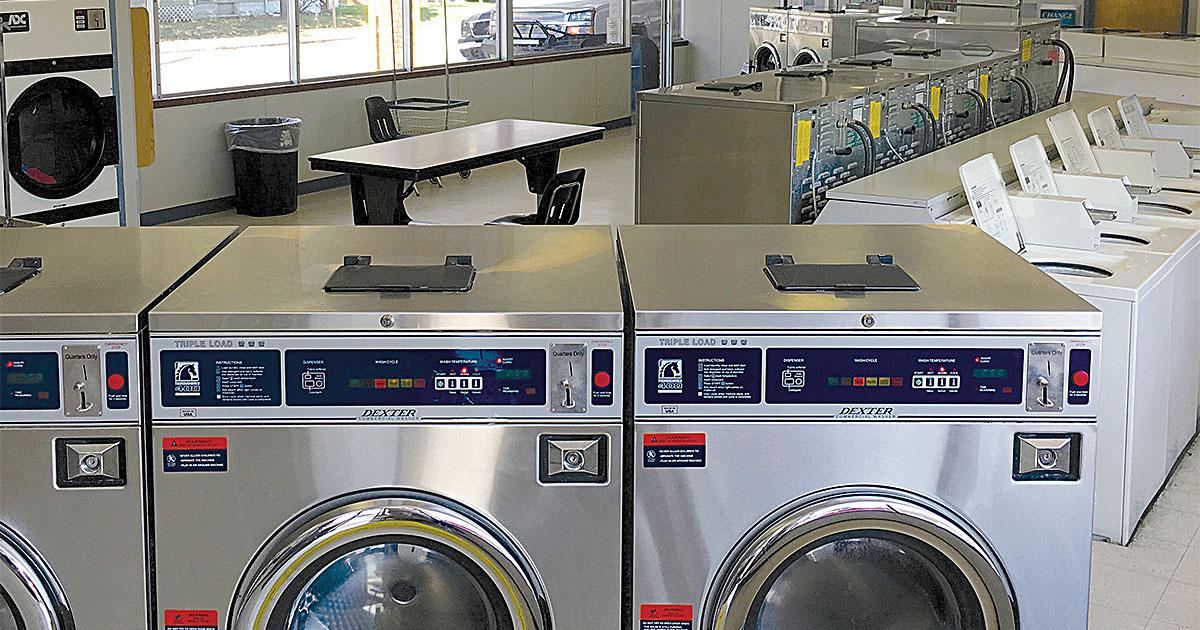 BETHALTO, Ill. — Hit-N-Run might not conjure up a place to wash ’n dry. And all those cars stacking up in a drive-thru by the door surely doesn’t fit the typical coin-op traffic pattern.

But across the mighty Mississippi River from St. Louis in south-central Illinois, this decades-old convenience store chain backed by self-service laundries and car washes is synonymous with fueling up and cleaning up.

GAS AND WATER DO MIX

At Hit-N-Run, gas and water do mix. Thousands of gallons of regular and premium pump out under the canopy while hot and cold flows through hoses at the washer aisles and bays. But the real action is by the c-store’s drink fountain, where success is measured in ounces and business hums along thanks in large part to creative marketing of its super-sized beverages to go.

Pull up curbside and leave the legwork to one of Hit-N-Run’s carhops to hand-deliver your favorite beverage concoction in its best-selling “HummDinger” 32-ounce Styrofoam cup.

“Where else can you drive through a place and get a nice-tasting soda for $1.27 and have it brought to you?” co-owner Dwight Fowler asks as we drink in the scene on a Saturday morning.

For those thirsting for more, there’s the Care Cup, coming in at a whopping 44 ounces. Have it filled to the brim and a portion of the purchase is donated to charity. Sales of the enormous sugary drinks are sweet indeed, with Fowler reporting approximately a cool thousand units sold on an average day throughout the six stores and contributing to his chain’s $13 million annual gross.

Most of the foot traffic inside the mini-mart is generated by uniformed staff runners like Sean Knight, who has been doing the circuits between cars and shelves for five years. He tells me his daily workout of ferrying pop, cigs and chips to motorists keeps him in shape, but not out of the gym. Regulars bring a smile to his face, especially those who remember the day he donned a fisherman’s outfit for a Pepsi promo.

As the line of vehicles snakes its way to the side of the flagship Bethalto operation, my focus shifts to the coin-op housed in the attached strip center. It’s where Fowler met Teresa, his wife of 41 years.

Back in their teens, she tended to the laundry while he bussed tables at the Pancake Ranch diner next door. One night, the two punched out at the shared time clock after a shift and have been together ever since.

Their rise from clean-up staff to operators is a classic story of the American Dream — one that would be related to me this day by Fowler while his bride was out nursing an injury.

MAKING DECISION TO GO ALL IN

Walking through the laundry — a wide-scale version of the homestyle laundry motif — takes one back to Hit-N-Run’s infancy, albeit modernized with two dozen front loaders and 18 30-pound tumblers configured in single and stack pockets. The long-shuttered restaurant, where flapjacks once flipped and romance blossomed, remains vacant, awaiting a carve out for a reconfigured dryer bank and a new food tenant.

Spread over five Illinois communities within a 15-minute drive of the riverside city of Alton, Hit-N-Run’s core convenience store operations are complemented by three gas stations and coin-ops, as well as two car washes and slot gaming facilities.

From a humble beginning sweeping floors and emptying lint bins, Teresa worked her way up the organization’s ladder into supervisory positions and, eventually, upper management over a 41-year tenure. Her husband honed his skills overseeing operations at a Clark Oil gas station before two decades on the road as a route driver and merchandising manager for regional soda and beer distributors.

“She knows the inside and I know the outside,” Dwight Fowler says, summing up the couple’s graduation from the school of hard knocks. Walking in the shoes of both employee and manager gave each a unique perspective on the challenges of retail and service businesses — an insight that would prepare them to fulfill their dream to head up a multimillion-dollar enterprise.

Hit-N-Run’s ownership changed hands midway through its half-century of operations and shifted course twice — once to hang up the aprons at two Pancake Ranch eateries, and later to spin the wheels opening a pair of slot machine parlors. But while the business mix and trademark curbside service drew steady traffic, time was taking its toll on the chain’s curb appeal.

With no family succession plan in place, the aging owners broke the news to Teresa that the stores were being put on the block. Offers from potential buyers cherry-picking the best locations quickly filtered in. She conferred with her husband, whose legs were bearing the brunt of thousands of route stops, and the decision was made to go all in.

“We approached them with the [buyout] idea and they loved it,” he recalls, adding the couple’s expertise and offer to package all six locations sealed the deal.

They made a pitch to the bank on their intimate knowledge of the inner workings of Hit-N-Run and the region’s competition, and secured financing for both the acquisition and real estate parcels in July 2017.

Addressing deferred maintenance items and pumping over $200,000 into the gas canopies to remain in compliance were top priorities. Fowler points to government regulations on fuel dispensing and food handling as the biggest challenge to their multi-pronged business — an area, he says, where Teresa excels.