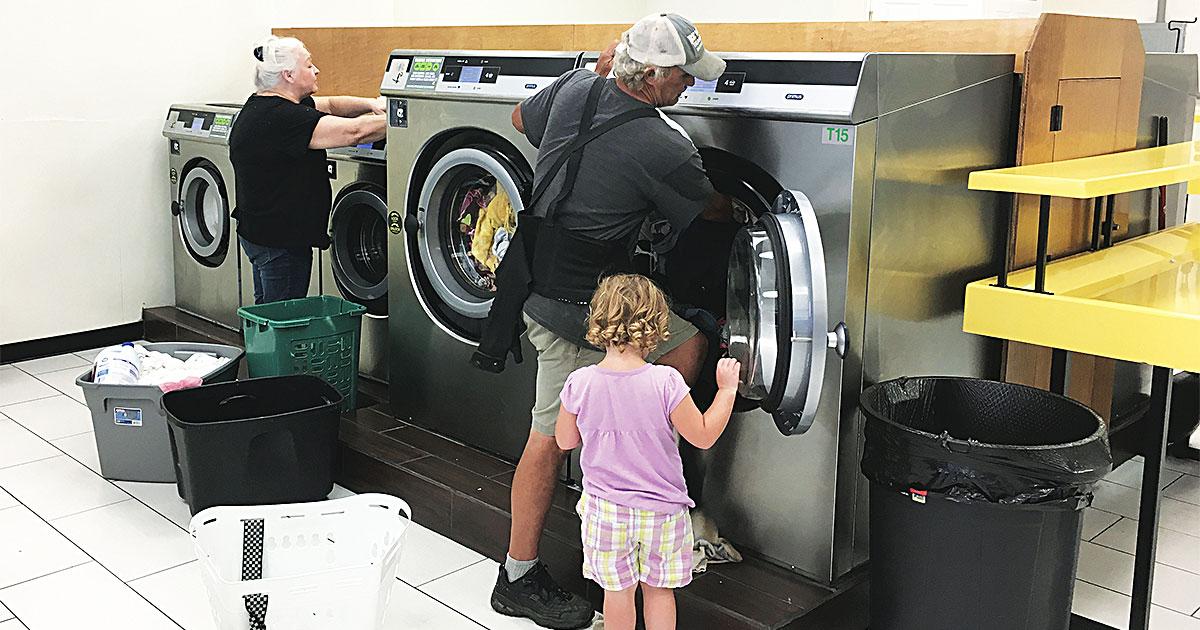 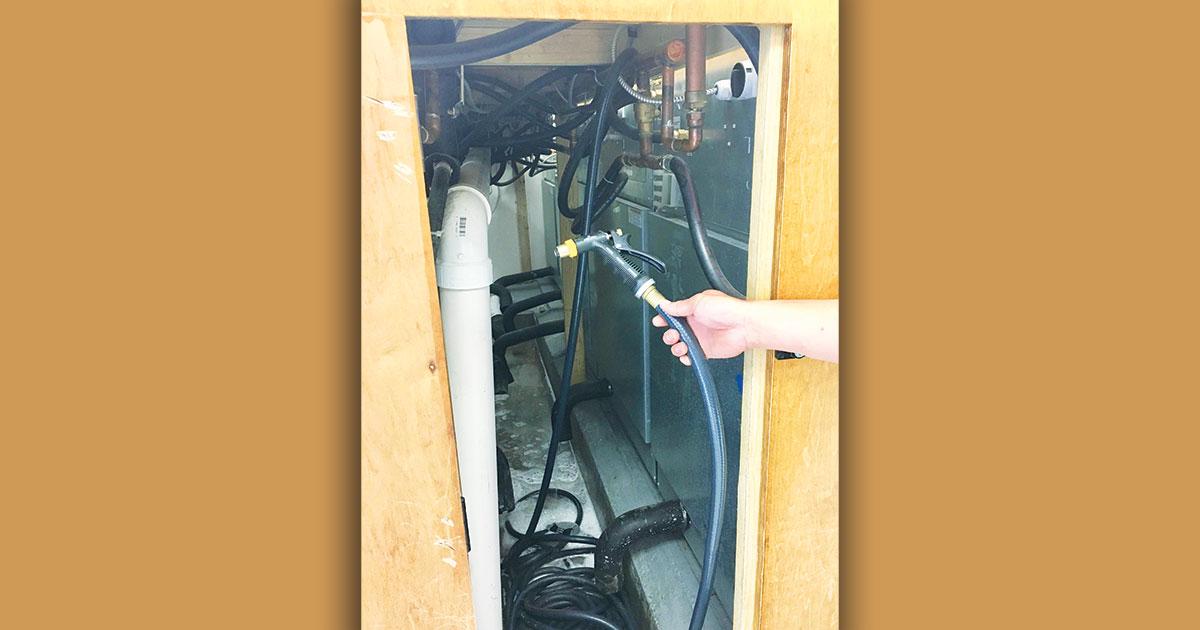 A 75-foot garden hose at the bulkhead is employed to power-spray clean every washer soap dispenser, machine gap, back panel and drain trough. 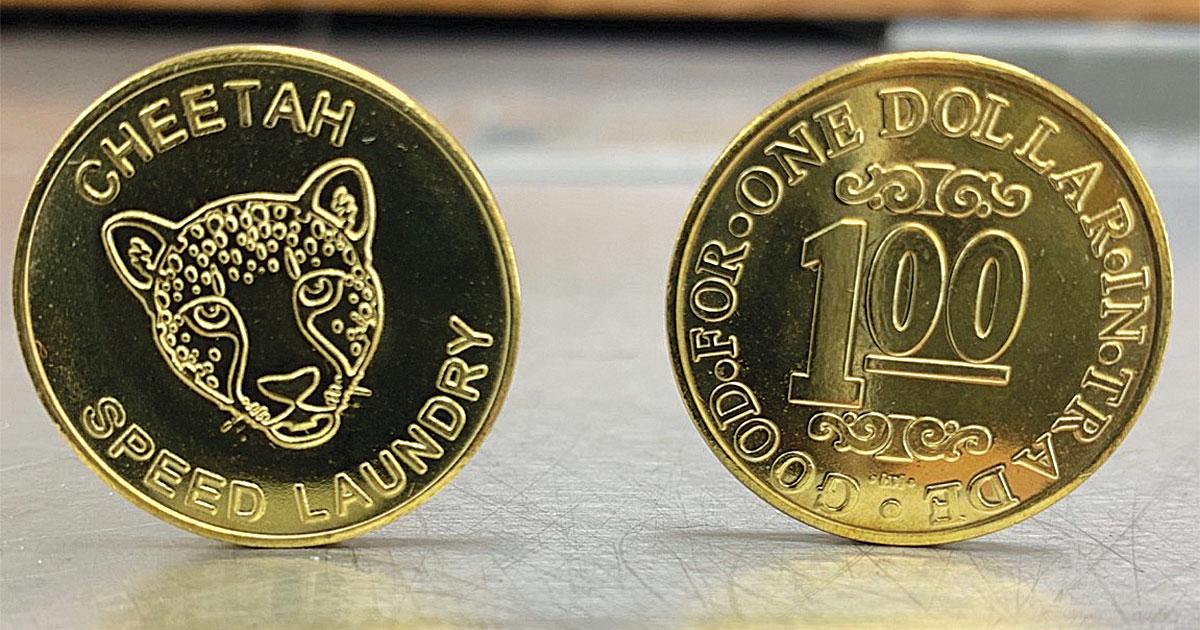 MOBILE, Ala. — What began as a lunch break turned into breakout success for Linh Nguyen. Just four years in, it’s on to laundry number eight with no sign of slowing down. Speed may describe this operator’s torrid pace, but what it truly defines is the customer experience he and his family deliver.

“We have to live up to our logo. A fast animal, so you get a fast washer, fast spin and fast dry. That is our mandate,” the architect of the Cheetah Speed Laundry chain tells me during a whirlwind tour of his stores dotting Mobile and nearby Gulf Coast communities.

His wife Huong’s parents, Viet and Dao, along with her brother Khoa, were enlisted to keep Cheetah running quickly and efficiently. Everyone pitches in with day-to-day operations, and when another rehab project comes online, Nguyen’s in-laws are there alongside the industrious owner, each using their hands and minds to create the best Laundromat they can.

THE DRIVE TO DESIGN ‘BULLETPROOF’ LAUNDRIES

The endcap store Nguyen inherited upon entering the laundry business was a frequent target of burglars who picked money boxes and drilled changers, leaving little operable. “I have to say thank you to the thieves,” the owner tells me of his wakeup call to design “bulletproof” laundries.

Turning a new page, his rear-load changers were securely anchored to a new cylinder block wall and reinforced with expertly welded steel pipes on the backside. He was sending a clear message to would-be criminals.

“They see the cinder block wall and they know it’s tough for them to use a crowbar,” Nguyen explains. “You don’t want to show them you’re weak. You can try, but you won’t succeed.”

Asked if he believes changers at any one of his 24-hour, partially attended laundries could be pried out, the welder-turned-operator smiles confidently: “I don’t think so.”

That first inherited store is the only location where prefabricated bulkheads are on the floor. To this tradesman, those oft-forgotten structures housing the lifeblood of the washer banks deserve critical thought.

“If your bulkhead is not wide enough, not high enough, not clear enough and not clean enough, ask yourself if you want to climb or crawl in there. How are you going to stand up and open a back panel and replace something?”

Nguyen doesn’t cut corners when it comes to his bulkheads and machine bases. Mounting utility lines high and strategically positioning shutoffs ensure ease of service no matter the equipment dimension while all but eliminating the risk of flesh meeting metal when accessing the space. Machine bases are designed to divert water or suds overflow incidents back toward the rear drain trough, preventing slip-and-fall hazards.

In many installations, custom cut channels are welded in front of the slightly recessed machines to act as a lip and keep floors dry. The proud owner runs a video of a washer spewing bubbles from a soap tray to demonstrate the effectiveness of the design.

He outfits select bulkheads with an extra water valve to accommodate a long garden hose that can stretch the length of the store to power-spray soap trays, machinery gaps, back panels and troughs — with the residual flow washed toward the drain.

“Move two washers from here to there and see how it works,” he motions as we walk an aisle. “If you don’t like it, then move it back.”

The operator pauses to relate one more benefit to soft-mount machines — the environment. “All our natural resources belong to the next generation. This is not ours.” Reducing natural gas consumption by 20-25% through shorter dry cycles, he says, pays off not only today, but in the future.

‘GOING IN A COMPLETELY DIFFERENT DIRECTION’

Cheetah Speed Laundry’s equipment count and mix varies in the eight stores, averaging a combined total of 45 washers and dryer pockets per venue. Front loaders and stack dryers dominate the offerings. Whether back to back or shotgunned along a perimeter wall, washers are configured in stairstep fashion, allowing customers easy reach to access more than one capacity.

Nguyen began circulating dollar coins from the start and upped the ante this year by offering optional one-stop credit card-to-token pay at his newest venues.

“The dollar coin was the main concept. With the token, it takes the dollar coin a further step to offer the customer use of a credit card.” The tandem’s success convinced him to duplicate the format at all stores in the near future.

With an expanding portfolio, the savvy operator is gearing up to launch local TV commercials to promote his offerings and leverage chainwide acceptance of his custom-designed Cheetah Speed Laundry token.

A proponent of dollar-increment washes paired with full-cycle dry vends, the operator considers himself a price leader in the market. But sensitivity at the coin drop is one lesson he learned early on.

After swinging open the doors of his inaugural store and running a free-dry promotion for six weeks, Nguyen implemented his planned full-cycle dry price format. One customer’s reaction stopped him cold.

The incident was isolated, and Cheetah’s meteoric rise on the local wash scene is evidence that Nguyen’s layout and pricing scheme work for him. He maintains that customers are willing to pay for a quality wash and dry in a clean, safe and inviting environment. Delivering that package in a minimal amount of time is what Cheetah is all about.

“We’re not a 40-minute wash and a 40-minute dry. We’re going in a completely different direction,” he says.

At a development pace of two stores per year, the inevitable comparison to a fast-running Cheetah is waved off by Nguyen. “Ten stores in one year or 10 years in one store. It doesn’t matter how fast or how slow. For me, I just keep doing it. I don’t set a limit.”