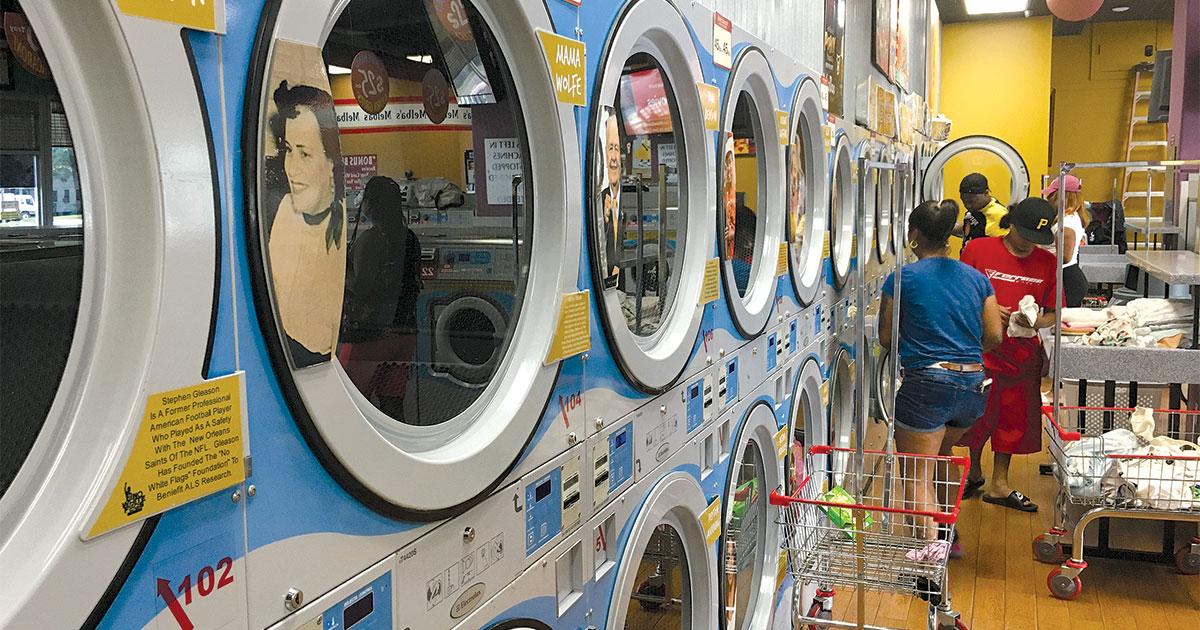 Family matriarch Mama Wolfe, who played piano with other jazz greats in New Orleans’ French Quarter, is given her well-deserved tribute at the front end of the dryer row in Melba’s Wash World. (Photos: Laurance Cohen) 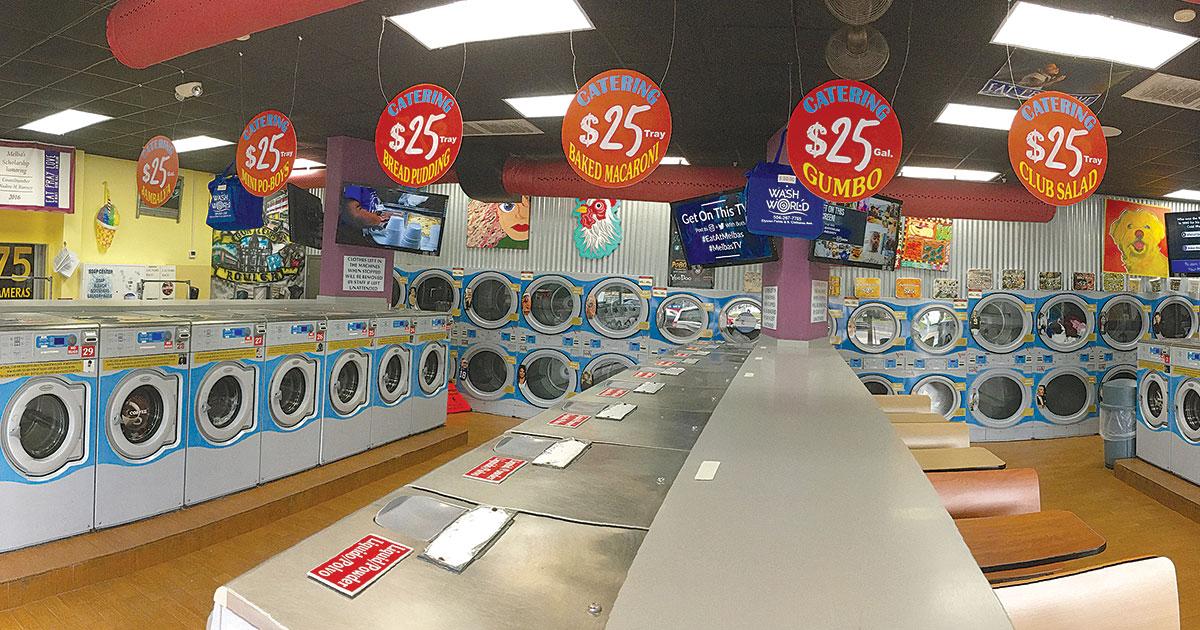 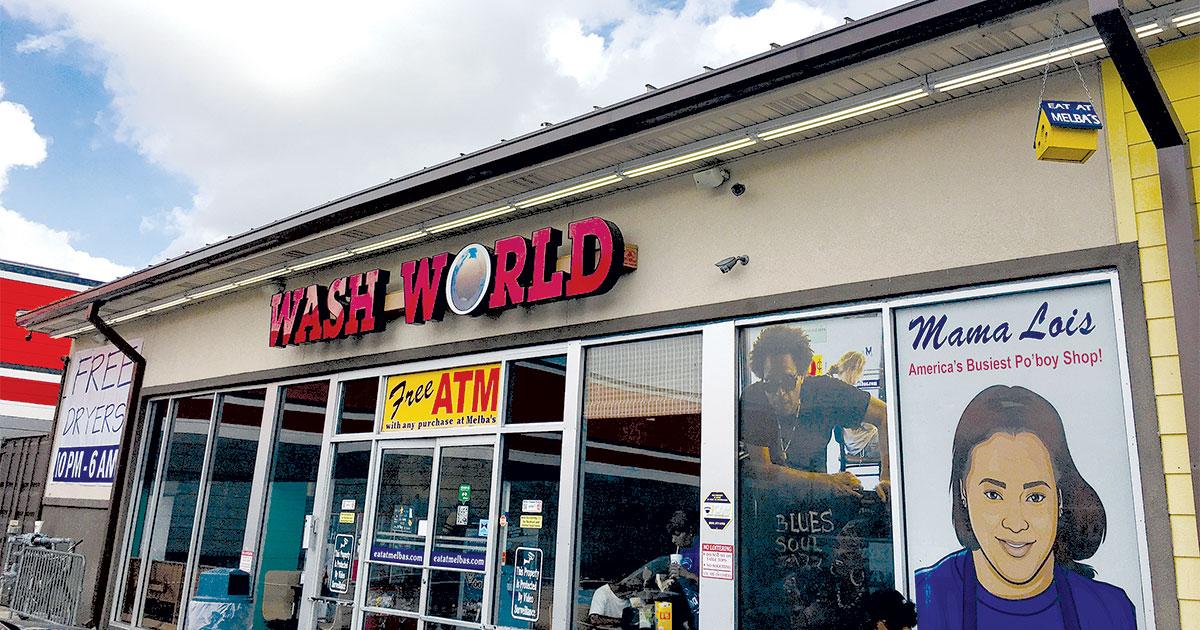 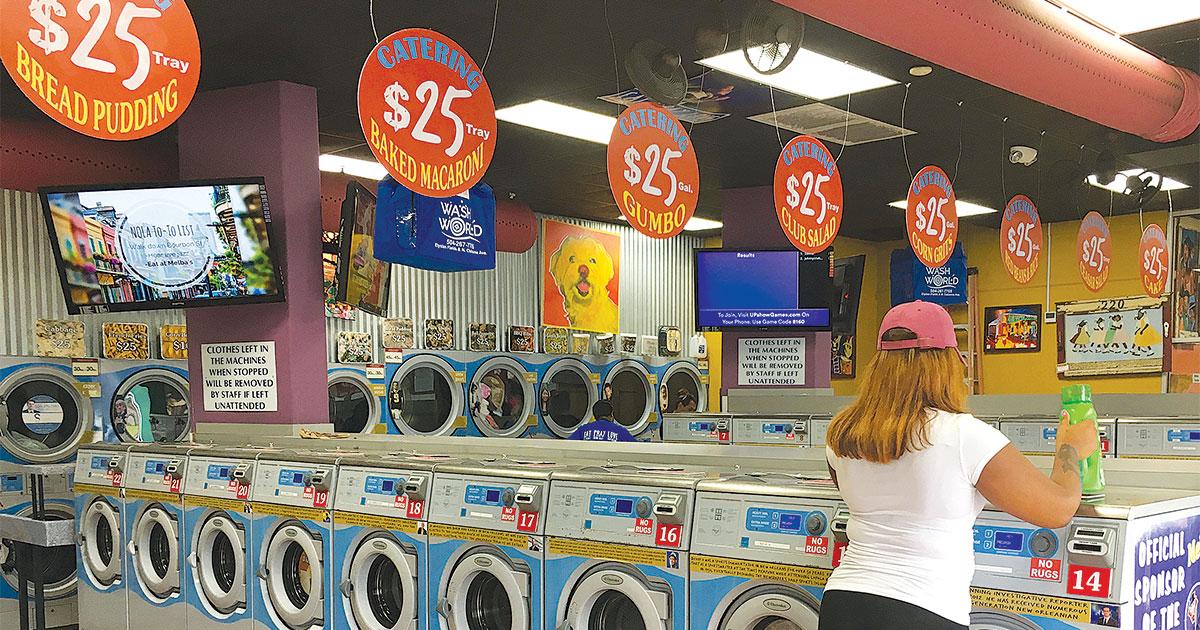 NEW ORLEANS — It’s months before Clean ’19 and I’m already hitting The Big Easy. There’s no better place to drink it all in than Melba’s Wash World, a post-Katrina emporium offering 30 big boys next to 30-shrimp po’boys.

Anchoring an intersection along Elysian Fields Avenue a mile north of the French Quarter, Melba’s captures the heart and soul of a metropolis inundated by a historic hurricane some 13 years ago. Like the city, owner Scott Wolfe Sr. persevered. His equipment may pay homage to New Orleans’ famous, but he’s dedicated to serving its working class.

Older brother Keith Wolfe is tasked with keeping everyone smiling and the 24-hour operation running smoothly.

Wash World is easy to navigate, thanks to wide aisles between the trio of back-to-back bulkheads running perpendicular to the dryers. Card-operated front loaders occupy four out of the six sides, with the remaining two set aside for booth seating and folding.

Nine 20-pound models vend for $2.97 for all temperature settings, plus 30 cents for extra rinse or heavy-soil cycle modifiers. The 15 45-pounders — representing half of the total washers — and four 62-pounders have base prices of $4.97 and $6.49, respectively, along with 49-cent cycle enhancement options. A pair of 77-pound models rounds out the mix, vending at $7.99 plus 75 cents per upgrade.

Sequential front-loader numbering is upstaged by the laminated celebrity photos and bios mounted between the control panel and loading doors. Over on the store’s five 30-pound and 10 45-pound stack tumblers, the stars pose on the top and bottom pocket handles while placards with their name and a short narrative are affixed to the right of the door glass.

Scott Wolfe says higher-profile entertainers, musicians, artists and athletes found themselves attached to larger-capacity washers and upper-tier dryers. All 60 honorees in Wash World’s version of a walk of fame were either native-born or had connections to New Orleans.

He and his wife assembled the list and wrote the tributes with help from Google searches to fill in the blanks. While famed French Quarter piano player and family matriarch “Mama” Wolfe deservedly gets top billing on a stack along with the likes of singer Mahalia Jackson, some, including Big Easy native Peyton Manning and fellow former NFL quarterback Archie Manning, made the cut, but were glued to the lower-pocket handles.​

“My philosophy at all my businesses is to attack all five senses,” Wolfe says. “We want you to hear it, see it, smell it, touch it and taste it.”

Throughout the complex is marketing Melba’s style. Posters of savory $25 catering trays compete for attention alongside $10 blue laundry totes, T-shirts and other merchandise. Stand around long enough, strike a pose, and Keith Wolfe will snap a photo, adding you to the continuous loop of satisfied guests featured on the big-screen monitors.

The blitz doesn’t stop there. Birdhouses touting Melba’s are scattered around New Orleans below the eaves of an estimated 500 residences. The pint-sized promos took flight when Scott Wolfe’s first campaign — turning a house into a giant painted billboard — drew the ire of then-Mayor Mitch Landrieu. Media outlets were drawn to the fight and Wolfe garnered citywide publicity. The laundry now pulls trade from a 3-mile radius, the owner reports.

A company-sponsored trolley, bought on a whim and once used to take Wolfe’s extended family on rides to the ice cream parlor, now plies the streets filled with raffle winners, tourists and wedding partygoers.

Parking demands at the door created bottlenecks in the early going, but were easily remedied with some window dressing.

“We made the back look like a storefront as much as the front so that way customers felt that either way they came in, they were actually going into the front of a building,” Wolfe explains.

The redesign helped funnel food and drink patrons away from front stalls coveted by wash customers. Today, the surface and neighboring lots can accommodate 100-plus vehicles.

Melba’s meteoric rise with Wolfe at the helm has not gone unnoticed. The enterprise came in at No. 123 on Inc. magazine’s 2016 annual ranking of America’s fastest-growing private companies.

For all the hype, the Wolfe family business is grounded in the community. Their motto — “Eat at Melba’s. Pray before meals. Love New Orleans.” — runs deep in the enterprise. Charitable contributions to an outreach program for troubled youth organized by Pastor Corey Hicks of Vine Community Church, generous school scholarships spearheaded by Wolfe’s spouse Jane, and free treats for top grade-earners are just some of the ways they give back.

Keith Wolfe points to a photo board displaying A-grade achievers whose diligent studies were rewarded with a cake and po’boy on the house to be shared with their proud parents.

We stroll to the tumblers where the 62-year-old manager offers some insights into the round-the-clock operation, including the successful launch of free drying from 10 p.m. to 6 a.m. available to either wash-and-dry or dry-only patrons. The freebie “keeps the store safe at night because there’s so many people,” he tells me, noting that overnight wash volume is up over 30% since the program was initiated.

Introducing home pickup and delivery of wash-dry-fold is under consideration, with processing slated for overnight hours to lessen the impact on daytime traffic.

The mix of alcohol and suds occasionally leads to someone walking home with the wrong clothes — a situation Wolfe straightens out by pulling up a record of laundry card usage on the dryer in question.

As we make our way down the line of personalized stacks, he tells me customers stake out particular machines and wait. He says trying to convince some regulars that all dryers heat up the same elicits a familiar response: “Naw, naw, naw, I’m gonna use Drew Brees. That’s the one that dries my clothes good!”