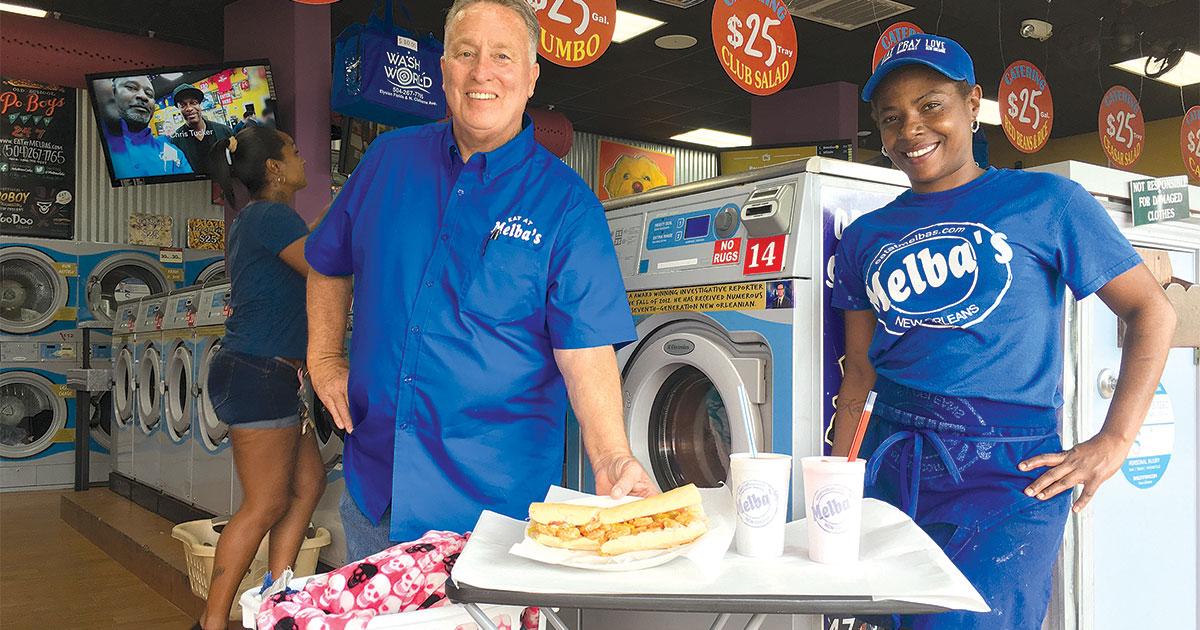 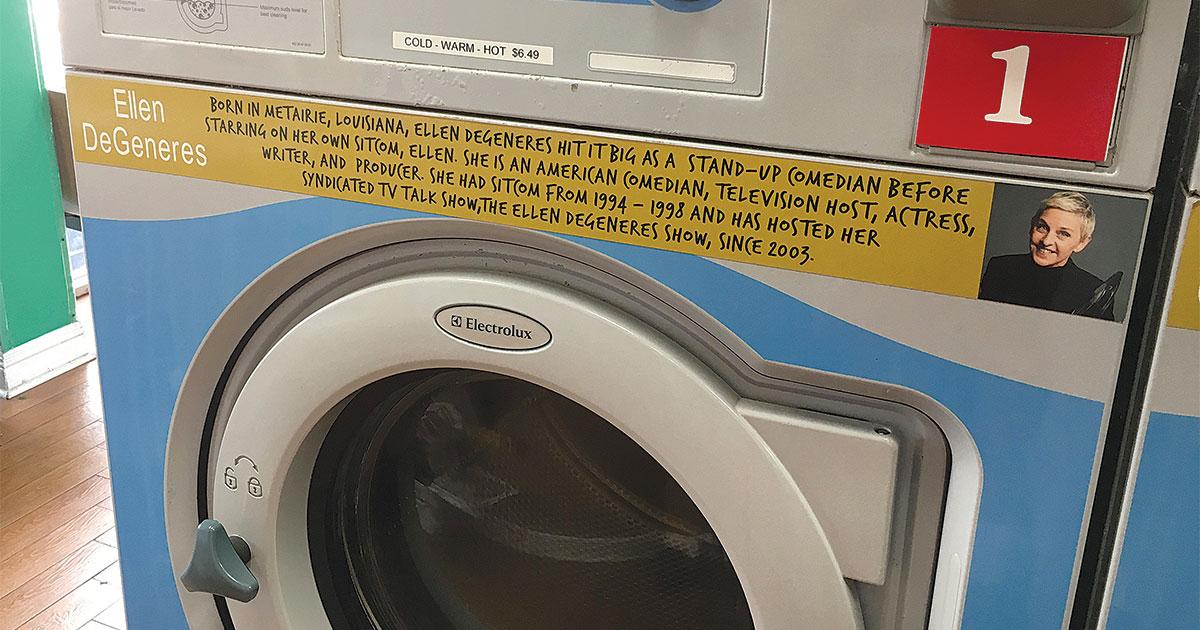 Daytime TV host and comedian Ellen DeGeneres from nearby Metairie, La., gets top billing at the first washer. 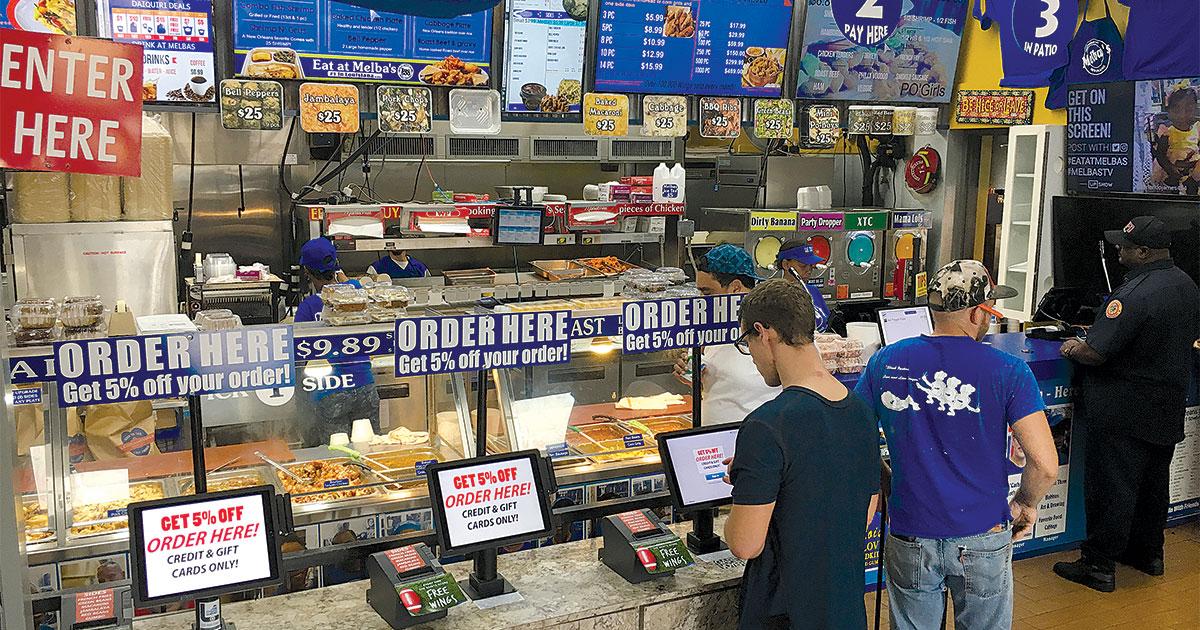 Kiosks are employed to help speed the ordering process inside Melba’s as well as inside the Wash World laundry next door. 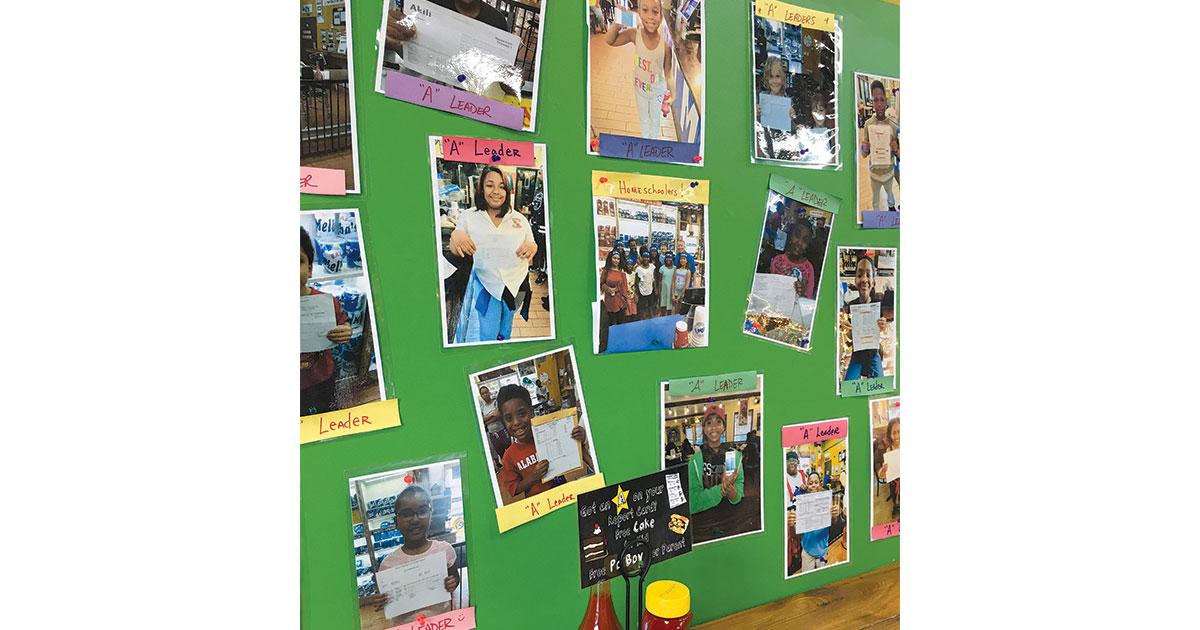 Score an “A” on your report card and score a cake and po’boy on the house at Melba’s.

NEW ORLEANS — It’s months before Clean ’19 and I’m already hitting The Big Easy. There’s no better place to drink it all in than Melba’s Wash World, a post-Katrina emporium offering 30 big boys next to 30-shrimp po’boys.

Anchoring an intersection along Elysian Fields Avenue a mile north of the French Quarter, Melba’s captures the heart and soul of a metropolis inundated by a historic hurricane some 13 years ago. Like the city, owner Scott Wolfe Sr. persevered. His equipment may pay homage to New Orleans’ famous, but he’s dedicated to serving its working class.

Part self-service laundry and part food counter, this urban oasis gets the community clean and fed — all washed down with a house special XTC or Unibrow frozen daiquiri. Toss in a couple of slot gaming corners and it’s easy to forget you’re here knocking out a chore.

“It seems like there’s a party going on all the time,” the 56-year-old entrepreneur says of Melba’s festive atmosphere.

Bundling wash, food, drink and slots isn’t an industry first; seeing it play out under one roof in an inner-city locale is. Grim reminders of the daily struggle are as close as the roadway’s median strip where the down-and-out huddle about their makeshift homeless camp.

Inside Melba’s Wash World, it’s a different vibe. As the weekday morning approaches the noon hour, momentum builds on both sides of the scrub-and-grub complex. What was a trickle of basket-toting patrons ramps up with overflowing carts. Through the glass door separating stainless machinery from stainless steam tables, a line forms with playful banter filling the eatery as lunch orders are called out.

Staffers are the real stars and accorded recognition in a Who’s Who poster lineup extending down the food line from the stuffed bell peppers to the bourbon chicken.

The counter winds over to a lively walk-up daiquiri bar, serving as center stage for connecting interior and exterior patios where diners dig into their $9.89 combo plates and po’boy sammies to a backdrop of swirling frozen concoctions. Any video slot machine pull is hidden from public view, conducted behind swinging saloon doors.

Tasked with keeping everyone smiling and the 24-hour operation running smoothly is Wolfe’s older brother, Keith. Inside his office, he can monitor the goings-on from cameras trained on every nook and cranny of the freestanding building and surface parking lots.

But you’re more likely to catch the jovial host on the floor acquainting newcomers with the in-house proprietary card payment system or rubbing shoulders with regulars. He’s ably assisted with a shift staff of six during the day and up to nine serving the after-work set.

An estimated half of the laundry crowd eats or drinks on a visit — all streamlined by touchscreen order-taking kiosks positioned near the main laundry card station.

In a typical month, Wolfe says 100,000 pieces of chicken and 5,000 signature po’boys are rung up. Sales of frozen daiquiris could fill the washers, especially on $1 Mondays, when 1,500 slushy cups are topped off.

Melba’s, named to honor a beloved family caretaker, had simple roots. At age 20, Scott Wolfe and his then-18-year-old wife Jane borrowed $10,000 to buy an established storefront grocery named Wagner’s. It grew to a 10-store chain catering to each community’s needs and turning heads with the slogan, “You can’t beat Wagner’s meat.”

Early iterations of Wash World coin-ops rose alongside two meat markets during the expansion, giving Wolfe a taste of the combo’s drawing power.

The foray into cooked meals took off with the opening of a string of Chicken Box carryouts, known for its tasty bird as well as a standing offer of a free wedding if the happy couple ordered up 1,000 pieces for their reception.

Wolfe shifted gears later to concentrate on construction and real estate development. Hard corners, high vehicular traffic, and 25,000 rooftops within a mile radius were what he sought. He sold off his stores and assumed a role as landlord. All went swimmingly until that fateful day in August 2005 when a Category 3 hurricane blew through New Orleans, taking out levees and submerging it in up to 20 feet of water.

Every outlet in his rental portfolio was washed out and the tenants never returned. Even if a site could be salvaged, there was nobody to serve. Turns out, the only thing to beat Wagner’s was Katrina.

“It was like Mars. There were no insects, no roaches, no birds. And there were zero customers,” Wolfe recalls of the surreal landscape. He spent $200,000 to gut, clean, and board up his buildings to lay vacant.

Months following the natural disaster, with the streets of New Orleans deserted, all Wolfe and his wife could do was drive by their once-thriving ventures. On one such ride, he found himself looking down the barrel of a loaded rifle held by a National Guardsman who had pulled him over.

“I remember the whites of his eyes and thinking this kid was going to accidentally shoot me. You felt like you were in wartime.”

When rebuilding took hold, a long-shuttered freestanding dry cleaner on a high-traffic corner between the Mississippi River and Interstate 10 in the city’s St. Roch neighborhood caught the developer’s eye. He acquired the property, along with some adjoining lots, in 2011 and readied two storefronts for occupancy.

When he found no takers, Wolfe built out and debuted Melba’s a year later. He enlisted support from distributor rep Wayne Finley to work up and execute a plan for the 4,000-square-foot laundry side while simultaneously getting back into the food groove in a space half that size next door.

Check back Thursday for the finale!