The test of the DuraCore Drive System started in 2015 with 10 machines running daily, with proper use and care and adherence to the recommended maintenance schedule, the company says.

Throughout the ongoing lab test, three of the 10 machines were removed from testing and used at trade shows to demonstrate the results achieved while the remainder of the seven machines reached more than 60,000 cycles individually (individual washer dependability may vary in actual use).

To put that in context:

The company says the results are based on lab testing of the DuraCore Drive System up to 60,000 consecutive 34-minute timed cycles using an 11-pound laundry load on the “Heavy Load” setting.

The system as tested included hub, drive bearings, bearing spacer/shaft sleeve, triple-lip with garter spring tub seal, cross-piece assembly with drum shaft, and drum. Individual washer dependability may vary in actual use, and this testing is not meant to supersede the machine’s actual warranty, Maytag specifies.

When the front-load washer was launched in 2015, its robust advanced design delivered features including intelligent controls with M-Series technology, advanced spin technology, six-point suspension and the DuraCore Drive System.

Dan Roscoe, engineer lead, has been working for Maytag Commercial Laundry since 1989 and led the design concepts seen in the machine.

“We wanted to design solutions that translated to reliability at the core of the machine,” says Roscoe.

“We included a durable shaft sleeve that would eliminate shaft wear. We designed the DuraCore Drive System, which offers a watertight, flexible triple-lip seal with garter spring that keeps moisture away from the shaft, protecting the premium bearings.”

Jason Hudock, engineer lead, has been with Maytag Commercial Laundry for more than 12 years and led the efforts to translate the design into production launch, testing and validation.

“We had such powerful data on its reliability that we backed it up with our competitive 7/5-year limited warranty.”

Engineer Kurt Werner has worked for Whirlpool Corporation for more than 40 years. He has more than 25 patents in his name and is an expert on laundry drives and motors.

He started working on commercial laundry in the 1990s and enjoys the focus on producing long-lasting equipment.

“Because the performance and reliability expectations are so high, all our single-load washers that come off the production line—100%—get inspected and get that extra human touch,” Werner says.

In 2019, the Commercial Laundry marketing team decided to take one of the MHN33 test models from the lab offline after more than 25,000 cycles to bring it as a display at The Clean Show in New Orleans, an important industry event that gathers around 11,000 customers, investors and owners alike.

A live feed video was also playing showing what was going on in the lab, including the techs coming in and out and changing out loads.

This year in Atlanta, as the machines reached more than 60,000 cycles, another one of them was on display along with a look at internal components showing how well the DuraCore Drive System has held up after all those cycles.

The company says its engineers are satisfied with the results obtained for the past seven years and will shift efforts to start testing new machines launching to market soon.

This milestone and the end of this lab test were celebrated by the entire Commercial Laundry organization with great food, fun games and a gathering of current and retired engineer colleagues. 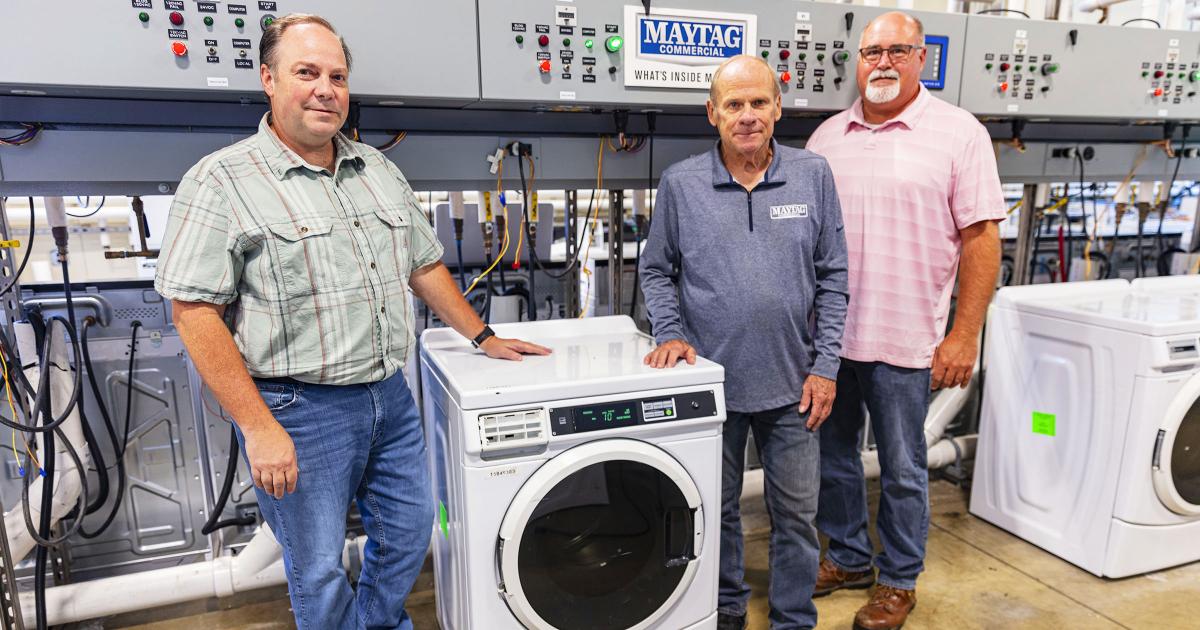