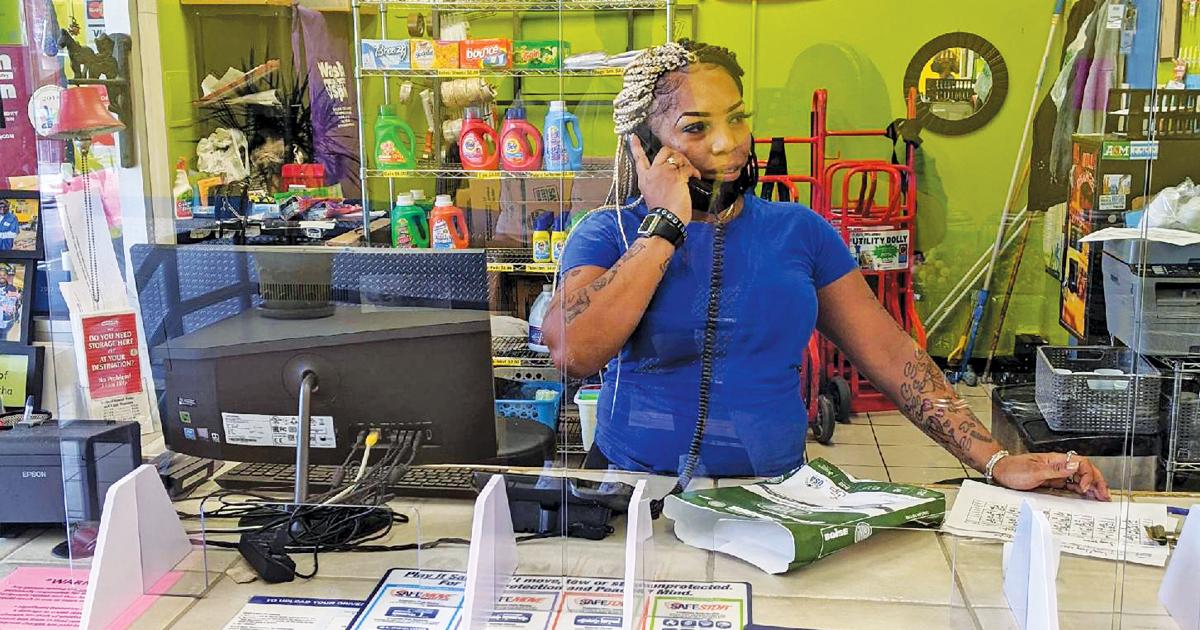 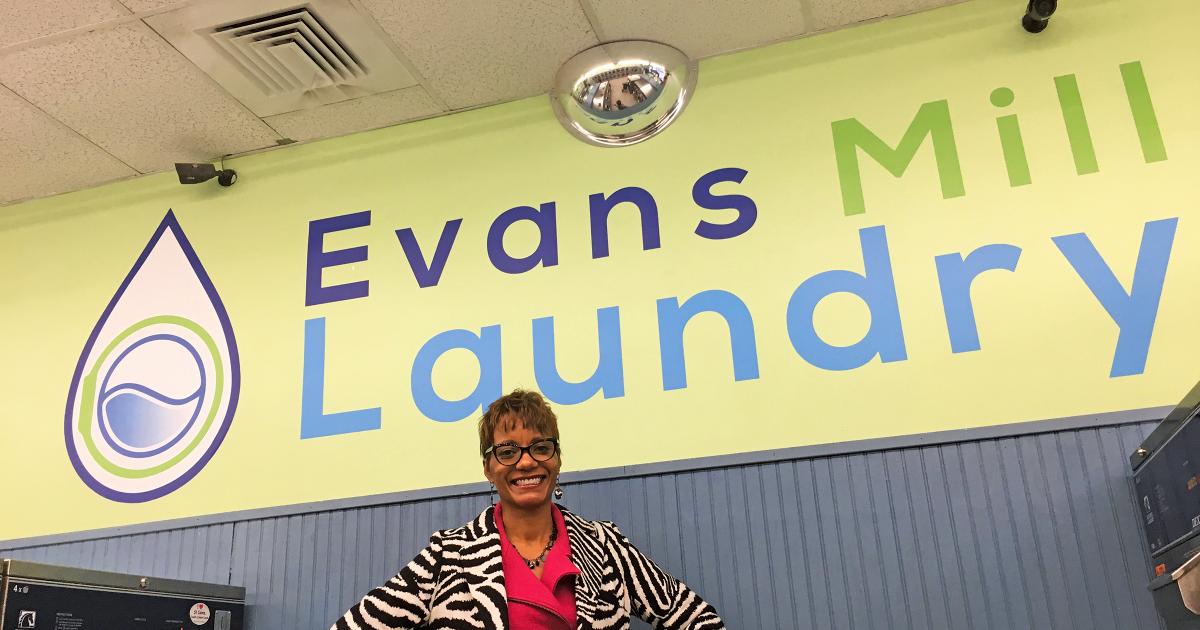 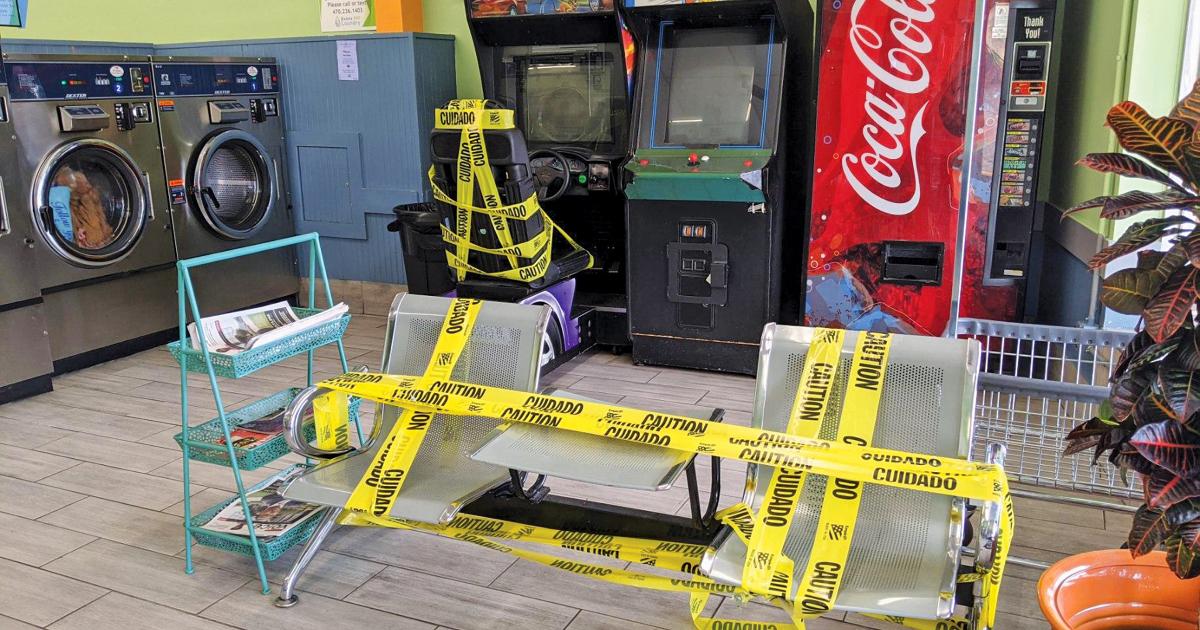 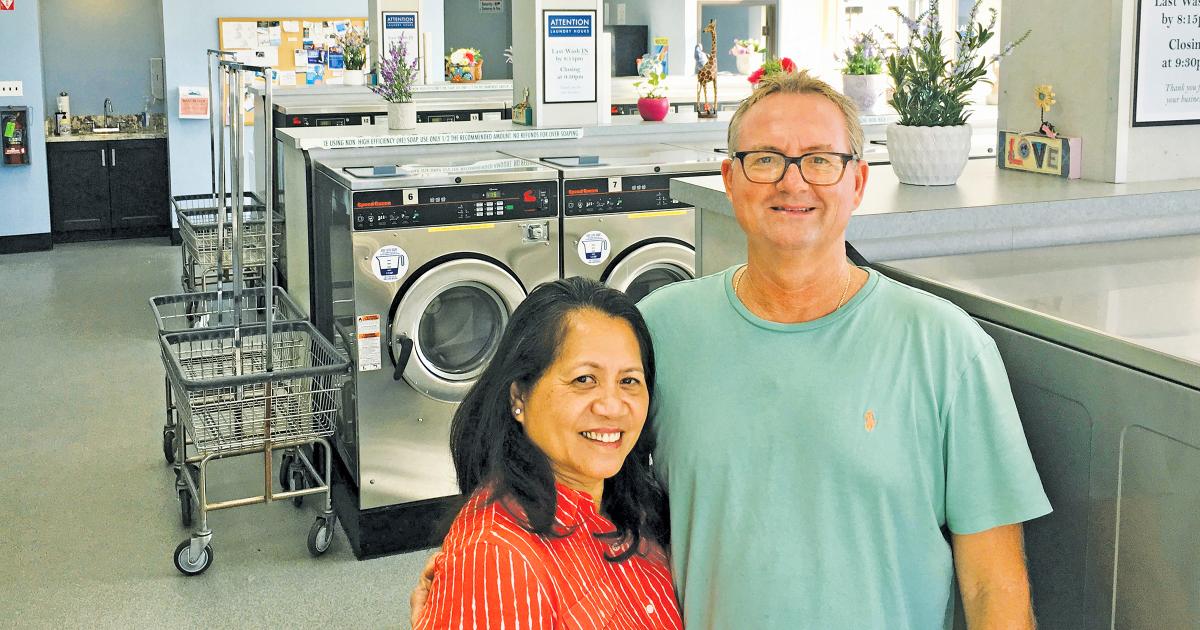 Tina and Scott Badarak pose at their flagship Serra Mesa Laundry & Cleaners, San Diego, in this American Coin-Op file photo from earlier this year. With three of their four stores being unattended, signage encourages customers to wear masks and socially distance but enforcing mandates isn’t in the cards.

HALLANDALE BEACH, Fla. — When you’re best known for hitting the open road in search of unique laundries, slamming the brakes on touring can put a real dent in trying to uncover the next hidden gem.

A pandemic may have forced this writer to park at home, but it didn’t halt the drive of some familiar faces. This month, I’m behind the keyboard — not the wheel — circling back to see how a handful of Goin’ with Cohen profiles are weathering these unprecedented times.

“There is no script,” explains Yvette Morton Williams, whose response to Georgia’s escalating health crisis included a load-and-go directive and cordoning off amenities at her three-store chain.

Readers will recall Morton Williams as the savvy entrepreneur overseeing the Laundromat/U-Haul tandem operation Wash & Spin Coin Laundry featured back in June 2017. Three years on, that Atlanta flagship has been joined by two new outposts — Evans Mill Laundry and Conyers Best Laundry — situated along Interstate 20, east of the city’s beltway.

“I’m very protective of all of my team members,” Morton Williams says by phone. “I’ll make the necessary changes to make my team feel comfortable and safe.”

The requirement to wait in vehicles during cycles and not fold in the premises was embraced by most, but not all, customers, leading to some isolated confrontations with staff.

“Some people were very rude, and it doesn’t take a lot of people being very rude to you during a work shift to make you think maybe I really don’t want to do this anymore,” the owner relates.

“Quelling the fear of my team” and keeping morale up were her biggest challenges. Seeking employee input on when to relax restrictions was her way to show appreciation for front-line staff working under trying conditions.

Volume at her chain recovered from March and April’s dip as summer approached. The seasoned operator was looking forward to the return of her store’s vibrant energy.

Morton Williams kept one eye on operations and the other on virus case levels. She says the pandemic strengthened her as a leader and stressed “how important it is to remain calm during the storm and to listen and show your team that you care.”

NO ATTENDANTS, NO PROBLEM

“I heard people closing stores, making people wait in their car, and no folding,” he says. “We left it to the customer to make their own decision.”

The contractor-turned-operator, who was profiled in April just as the pandemic was taking hold, oversees a four-store chain alongside wife Tina. And with three out of four locations unattended, enforcing mandates redefining how the public engages in a self-service laundry venue just wasn’t in the cards.

That’s not to say Badarak ignored the calls to don face coverings and spread out. Signs encouraging the use of masks and maintaining space were prominently placed on windows and around interiors, but he distanced himself from taking on the role of enforcer: “It is what it is. I’m not the mask police.”

His one tandem operation — Serra Mesa Laundry — saw drycleaning sales plummet 95% in the spring months as people stayed home. The downtime allowed a staffer to visit each location and tidy up middays to supplement nightly deep cleaning.

Overall machine income declined approximately 25% in April and May, Badarak reports, before bouncing back in June to match 2019 levels.

When coin circulation seized up nationwide, the owner watched from the sidelines.

“I have too many quarters,” he laughs, giving credit to his token-op format for repelling non-patrons from draining changers at his unattended stores.

A healthy uptick in turns on his 40- and 60-pounders carried into the summer, Badarak notes, attributing the 25% bump to customers hauling in bedding. The move to big iron was countered by a slight decline in use of 20-pound front loaders.

The operator, whose mainline construction trade is booming, tells me he remains bullish, citing the majority of San Diego’s workforce still collects paychecks.