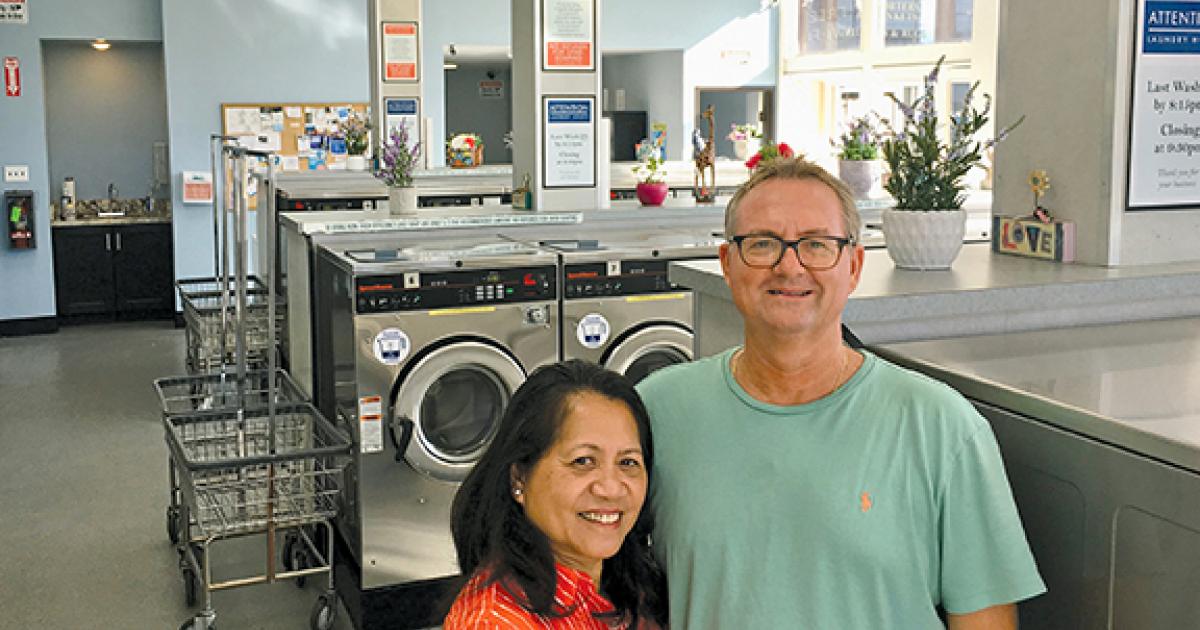 Tina and Scott Badarak pose at their flagship Serra Mesa Laundry & Cleaners, which was brought back to life after its closure in 2011. (Photo by Laurance Cohen) 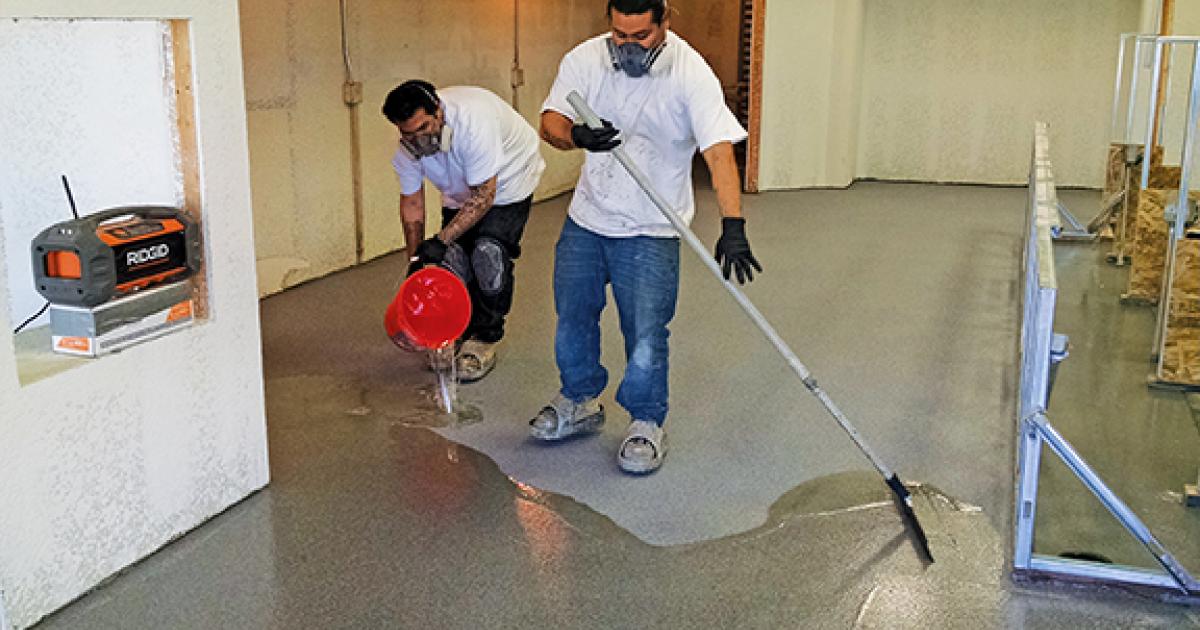 A crew prepares the Quartz flooring at a laundry renovation prior to machine installation. (Photo courtesy Scott Badarak) 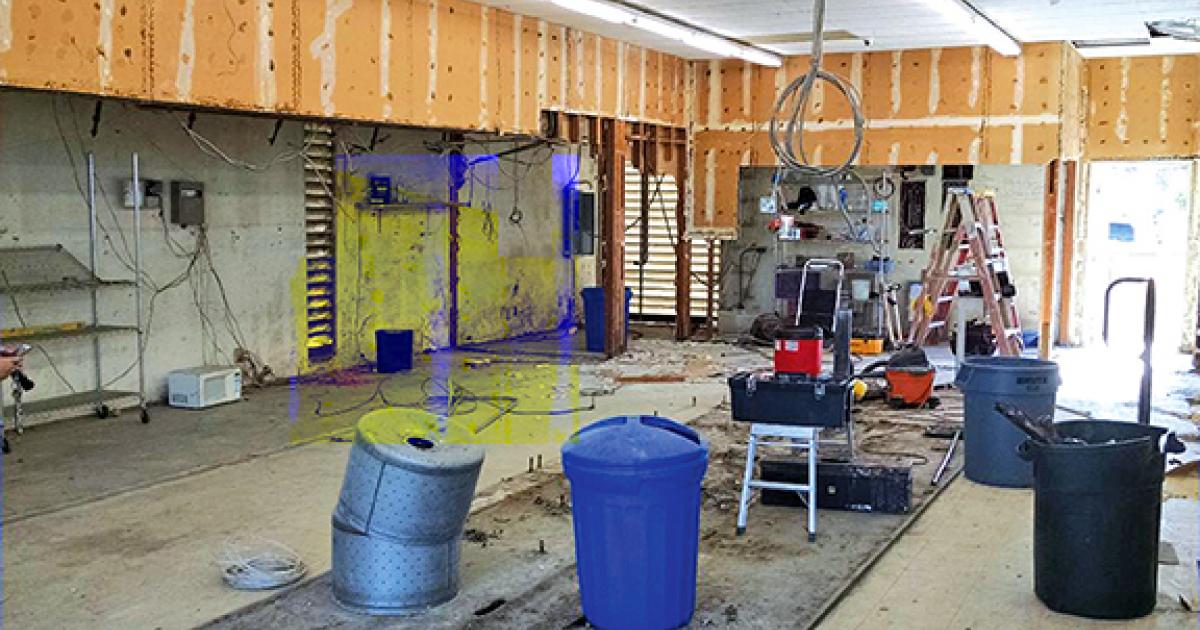 A recent Badarak remodel, Duds in the Suds Coin Laundry, is taken back to four walls. (Photo courtesy Scott Badarak) 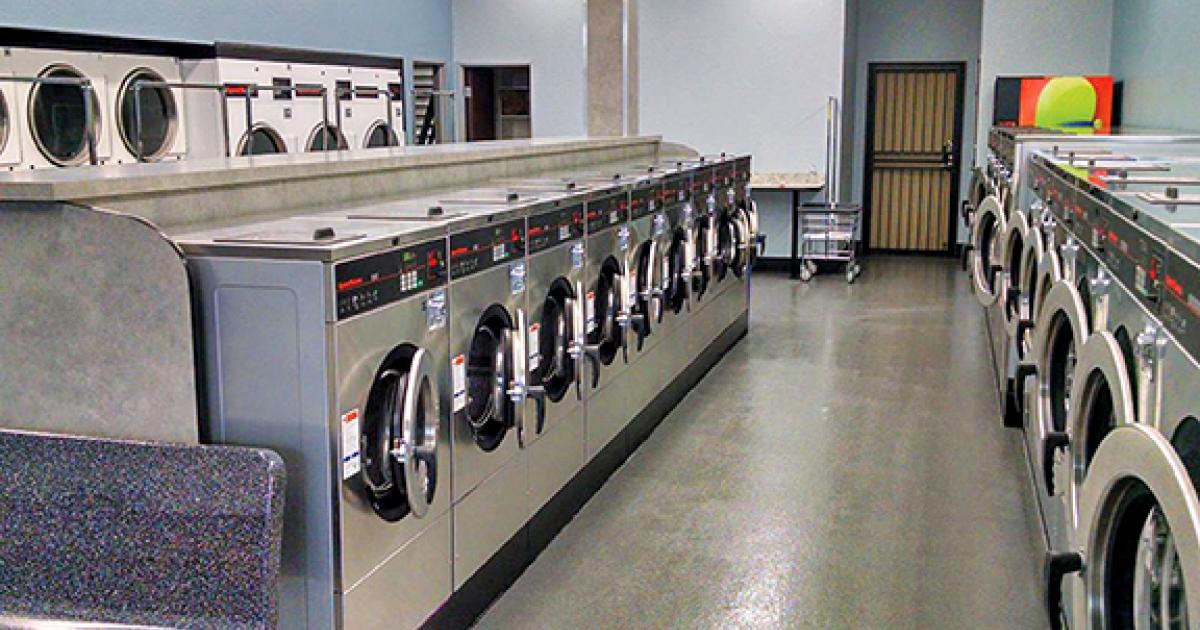 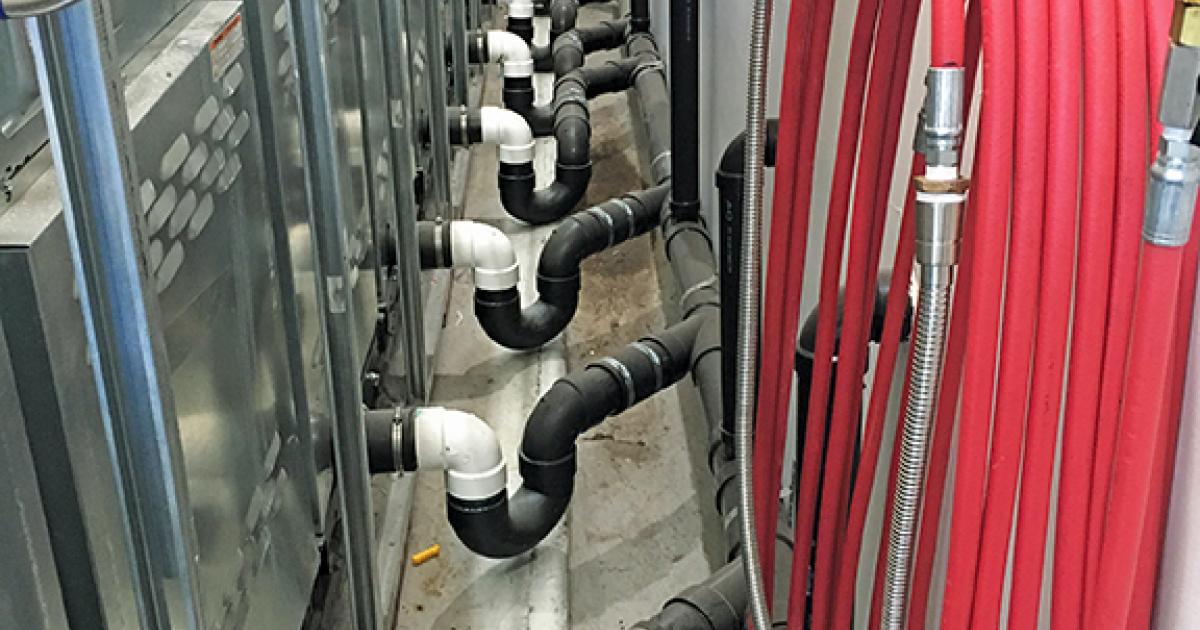 A water hose at Duds in the Suds Coin Laundry is employed to spray out residue remaining in washer soap trays. (Photo by Laurance Cohen)

These nifty features most operators overlook on their to-do list are tucked away inside Scott Badarak’s laundries. And in San Diego’s hotly contested market where he competes for dirty duds, those little things make a big difference.

The 54-year-old Californian is cut from the same cloth as other tradesmen who have long taken a fancy to self-service wash-and-dry. For them, it’s always been an opportunity to collect some extra coin while hammering away at the job site.

“Anybody who has building experience is going to feel more comfortable jumping in with both feet,” he tells me as we make the rounds to his four laundries. “A broken machine, broken pipe or broken electrical, it doesn’t scare you.”

And neither does the prospect of resurrecting a neglected coin-op. Turns out he has quite an eye for fixer-uppers. But Badarak isn’t looking to flip. His are keepers.

“I’m always being thanked for our very clean Laundromat,” she tells me, adding that building clientele hinges on courteous service, offering money-saving tips on machine selection and creating a venue that “feels like home.”

Serra Mesa oozes SoCal’s laid-back lifestyle with its raised front patio capped by a wooden slat canopy, providing the perfect opportunity to lounge while washing. On the other side of the glass are three sun-drenched washer banks running perpendicular to a bank of single- and stack-pocket tumblers.

The store was a trial balloon eight years ago for Badarak, who got his start as a contractor in his mid-20s. Residential work transitioned into hotel renovation projects, and with it, tight deadlines.

“You start the day after Thanksgiving and you better be done the first of February,” he recalls of the stressful, yet fruitful undertakings.

Knocking out 200 rooms in a matter of weeks demanded seven-day-a-week workloads. Eventually, he returned to the residential side of the business. Laundromats as a sideline venture intrigued him, and the topic did come up from time to time during dinner conversation with his wife.

Talk turned to action when he spotted an eviction notice on Serra Mesa’s shuttered storefront a couple of minutes from home. The couple was familiar with the place, having done wash there on occasion. Entire sections of inoperable equipment were taped off, Badarak recalls of the location before its closure.

He secured the site from the landlord on a handshake and was granted 60 days to perform his due diligence prior to inking a deal. “Before signing the lease, I had to do my homework to see if it was something I wanted to do.”

Working through the numbers brought him to the internet, where he got a taste of the local laundry resale scene.

BATTLE AGAINST THE CLOCK

Enthusiasm to snag a coin-op without paying a dime was tempered by the realization there was a missing piece to the puzzle: past revenue. His focus turned to the prior tenant’s water billing. After some back and forth, Badarak got hold of meter readings by paying off a portion of the account arrearage. With the data in hand, he estimated cashflow and moved forward.

Serra Mesa was brought to four walls, leaving only the underground service lines intact. Electrical service was upgraded and the premises rebuilt over a six-month window at a cost of approximately $80,000, setting the stage for installation of $160,000 in new equipment.

Taking on a closed laundry had the veteran tradesman well within his comfort zone: “I knew what I was up against and wasn’t scared of the renovation.”

As part of the top-to-bottom rehab, his crew sized mechanical feeds beyond the manufacturer’s recommendations. The only surprise on the project: a treasure trove of coins lodged inside the drain line’s P-traps.

As he progressed, Badarak learned more about the iron on the floor and eventually took on machine installation as well. Timetables are a big factor in rejuvenating aging laundries, the owner says, citing the battle against the clock to get the doors open while paying rent.

Oversight of the four stores is convenient. It’s a 10-minute drive from home to the farthest store, and visits to each are part of his daily ritual. Crews clean and close nightly, and doors open automatically each morning at 5 or 6 a.m., depending on the venue.

All of Badarak’s Laundromats were at one time quarter-only operations. In concert with the most recent rehabs, he’s now transitioning to a dual coin/dual token payment format. Quarter and dollar value tokens are dispensed from a multi-hopper changer accepting cash, credit and debit cards, and then redeemable at washers and dryers equipped with multi-coin drops.

Dense multi-family housing is the lifeblood for the chain, but also its Achilles’ heel. At one location, the operator reports up to $2,000 in quarters walk each month from his changers to neighboring apartment laundry rooms.

“I needed some way to control my stores,” he explains. “I knew if I go with tokens and put the signage up, then everything that goes out of those machines will be used there. I won’t have those people coming off the street.”

Badarak says he appreciates the freedom that comes with having well-designed projects and systems in place.

“I’ve had my own business for 30 years so a Laundromat is just another aspect of being an entrepreneur.”

He gets a kick out of meeting customers while going about his routine. “Everyone asks the same questions: ‘Is this a good business to be in? How much money do you make?’”

The operator takes it all in stride and doesn’t beat around the bush saying multi-store ownership is a good life. But his easygoing shop talk does carry one caveat: “I tell ’em just don’t buy the one down the street.”