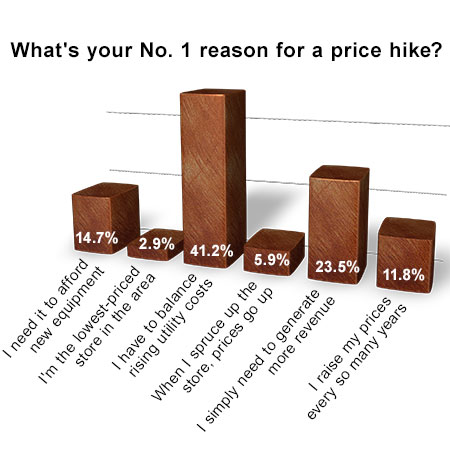 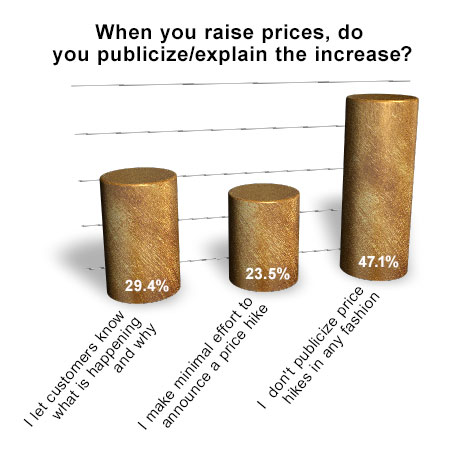 CHICAGO — Meeting the demands of rising utility costs is the main reason why the majority of coin laundry operators (41.2%) decide to raise prices, according to results in this month’s American Coin-Op Your Views survey.

Other operators raise prices to “generate more revenue” (23.5%), while close to 15% do it to “afford new equipment.” Roughly 12% say that raising prices is something they do “every so many years,” while 5.9% say prices go up when they decide to “spruce up the store.” A small fraction of respondents (2.9%) say that they are “the lowest-priced store in the area.”

When raising their prices, 47.1% of respondents say they “don’t publicize price hikes in any fashion,” while 29.4% say they “let customers know” about the price hike, and why they are raising prices. The remaining 24% say they only make “minimal effort to announce a price hike.”

More than half of respondents (52.9%) do not feel guilt or apprehension when raising prices.

Approximately 74% of respondents say they have already raised washer and/or dryer prices at their store in 2014, or intend to do so before the end of the year, while 11.8% say they have no such plans. Roughly 15% are unsure if they will be raising prices this year. Some respondents raised their prices as recently as February, while one operator last raised his/her prices in August 2009.