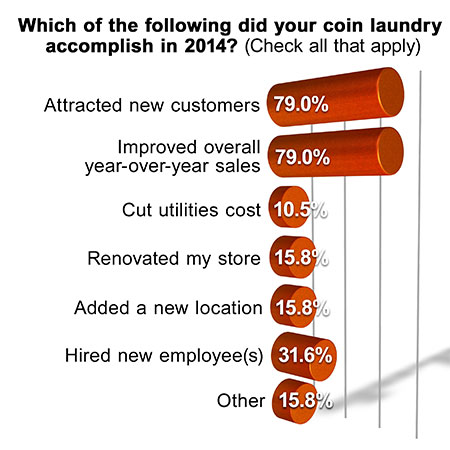 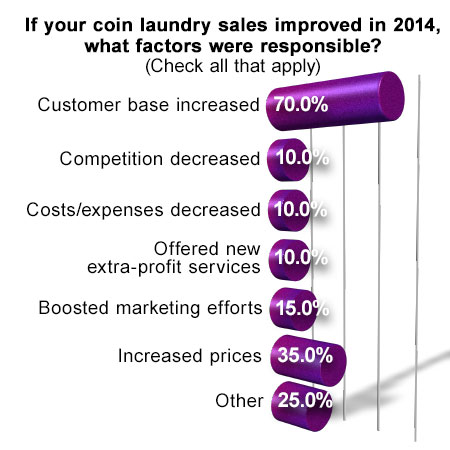 CHICAGO — The majority of coin laundry owners and operators surveyed in November’s American Coin-Op Your Views survey say “[attracting] new customers” (79.0%) and “improved overall year-over-year sales” (79.0%) were among their accomplishments in 2014.

Close to 32% of respondents say they hired new employees in 2014, while equal shares of 15.8% say they “renovated [their] store,” “added a new location,” and/or accomplished “other” goals, like adding new equipment.

Operators who say their coin laundry sales improved in 2014 attribute the success to an increase in their customer base (70.0%), increasing their prices (35.0%), boosting marketing efforts (15.0%), decreasing competition (10.0%), decreasing costs/expenses (10.0%) and/or offering up new extra-profit services (10.0%).

One-quarter of respondents attribute improved sales to “other” factors, like replacing equipment, or increasing their store’s operating hours.

“We installed new large-capacity equipment and changed hours to 24/7,” shares one respondent, who says that he/she also increased marketing and advertising. “Business is booming!”

“We have multiple store locations, one being brand new in our little town and people are flocking to it since they now have a viable option,” says another operator, who adds that he/she has plans of opening another location in the new year.

Laundry owners and operators were also asked to weigh in on what 2015 business will look like. An even 70.0% predict their wash prices will increase, while 30.0% say they will remain the same. No one who took the survey predicts lowering wash prices next year.