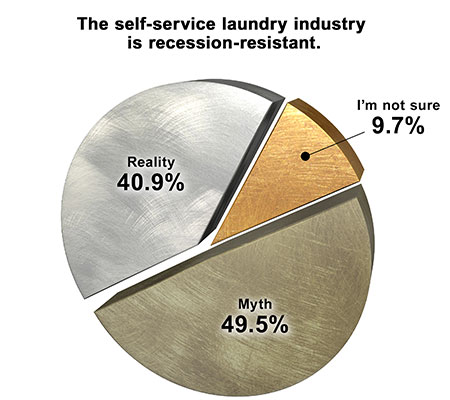 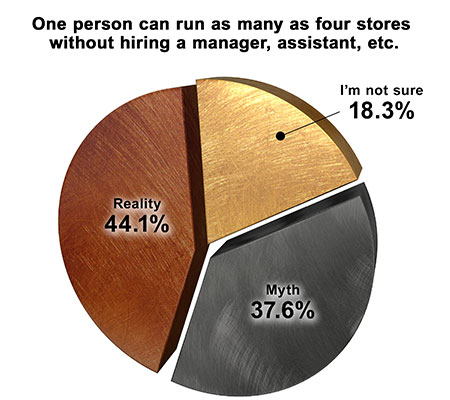 CHICAGO - Almost half of coin laundry store owners polled (49.5%) do not believe in the notion that the self-service laundry industry is “recession-resistant,” according to data from this month’s American Coin-Op Your Views survey.

“People can find all kinds of ways to cut laundry spending––wash at a friend or relative’s, hang clothes to dry, wear clothes longer … [and] cram six loads in a four-load machine,” says one store owner.

While a small portion was not sure if the industry is “recession-resistant” (9.7%), 40.9% considered the idea a “reality.”

Store owners were also asked if “one person can run as many as four stores” without hiring assistance. Roughly 44% say that the idea is a “reality,” while 37.6% say it is a “myth.” Roughly 18% were not sure.

In terms of other operational “myths vs. realities,” an overwhelming majority of respondents believe that a “well-kept laundry reduces [a store’s] chances of being vandalized” (75.3%). While 17.2% considered the idea a “myth,” 7.5% were not sure.

“People come into my laundry expecting to find a dump, [but] it is clean and [has] no out-of-order signs,” says a store owner.

Store owners also weighed in on the industry’s future myths and realities.

Store owners also forecast that “fewer, but larger, laundries” will be a “reality” in the next decade (58.1%), while 25.8% were unsure. Roughly 16% of respondents say the notion is only a “myth.”

“My favorite myth is that you can operate a store as an absentee owner in six to eight hours per week,” says one respondent, with many others echoing the sentiment.

“My favorite myth is that anyone can run a laundry,” says another store owner. “You must have the self-drive to get up every day and do the rounds and be vigilant.”