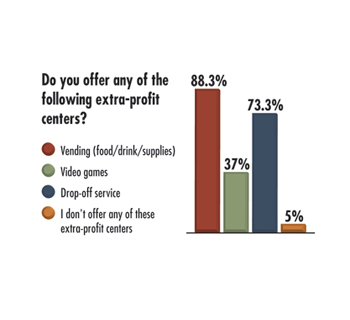 While the extra-profit centers mentioned above are self-service laundry “classics,” operators offer myriad extra-profit centers. Some of the more popular offerings include Internet access, drycleaning/alterations, ATMs and commercial accounts. Dog washing and self-service car washing (in some form) also garnered votes.
Other product/service offerings include ice cream, massage chairs, tanning, rug-cleaning machinery (rental) and various over-the-counter sales of shoes, jewelry and cell phones.
Why aren’t more extra-profit centers offered? Forty percent lack the space for an extra service. Other reasons for not offering an extra service include “other,” 26%; the lack of customer demand, 12.8%; staffing needed to run the service, 8.5%; and the lack of start-up funds, 6.4%. Most of the “other” responses are a combination of the reasons listed above.
Only 18% have offered an extra-profit center that failed. A good number of these responses involved food service and the difficulty of preparing food, maintaining an inventory and competing with neighboring businesses.
In a perfect world, what extra-profit center would you offer? There was a wide range of responses, including photo development sales, postal service, hair care, lottery-ticket sales, DVD rental, pay TV/toilet, slot machines and beer-and-wine sales.
While there seems to be an industry buzz about tackling commercial work, the jury is still out on the popularity of this extra-profit center. Thirty-two percent believe commercial work is going to be the next “big” extra-profit center, while 27% disagree. Forty-one percent are not sure if commercial work will fill the bill as the next big extra-profit center.
While the American Coin-Op Wire survey presents a snapshot of the audience’s viewpoint at a particular moment, it should not be considered scientific.
Subscribers to the Wire e-mails — distributed twice a week — are invited to participate in an industry survey each month. Click here and follow the menu instructions to sign up for the free e-mail service.