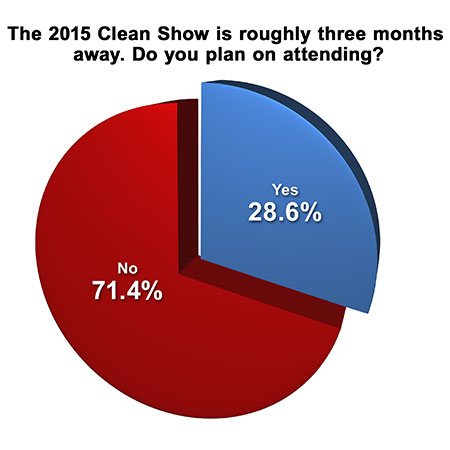 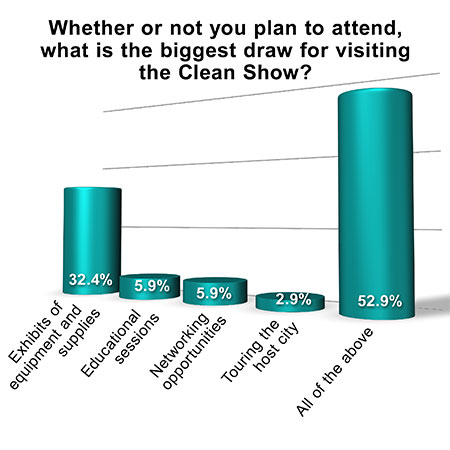 CHICAGO — Close to one-third of coin laundry owners and operators surveyed in this month’s American Coin-Op Your Views survey say they plan to attend this year’s Clean Show in Atlanta.

For 71.4% of respondents, attending the upcoming show is not on their agenda.

The majority (48.2%) of those who will not be attending say they “can’t spare the time.”

“I will be gone for spring break, so I’m not sure I can take another week off,” one operator says.

“This is the [busiest] time of year for dry cleaners here in this part anyway,” says another. “My son owns a dry cleaners and would like to attend, but this is the worst time of the year for him.”

Close to 15% provided “other” reasons as to why they will not be attending, with one respondent saying he/she is “in the process of planning and building a new Laundromat.”

The show makes a return to its traditional four-day format from Clean 2013’s three-day schedule. Roughly 38% of survey respondents say they are “OK” with this format, while the majority (55.9%) are “indifferent” about it. A small percentage (5.8%) say they “don’t care” for the four-day format.

Whether attending or not, 32.4% of operators say the biggest draw to attending the Clean Show is the various “exhibits of equipment and supplies.”

Equal shares of 5.9% say it’s the “educational sessions” or the “networking opportunities” the show provides, while close to 3% say the biggest draw is “touring the host city.”

For the majority of respondents (52.9%), the biggest draw is “all of the above.”

The Coin Laundry Association will host eight educational sessions during the show’s run. The topic generating the most interest among survey respondents is All Things Google: Tips and Secrets to Your Best Marketing Resource.

Other sessions garnering some healthy pre-show buzz, according to the survey results, are The High Tech Laundromat: Streamlining Store Operations Through Technology, Flip My Laundry: Best Practices for Remodeling Laundries, and Top 10 Secrets Potential Laundry Owners Should Know.

“Wish I could be there, but unfortunately, I can't,” says one respondent.

“Wish I could attend,” echoes another.

“[I] don’t like the four-day format [and] will be leaving early,” says one respondent. “Also, [I] don't care for Atlanta as a host city.”

Another operator has a different tone, saying he/she is “looking forward” to the show.

“[I] always look forward to see what new products [and] new features [are] being introduced,” says another.