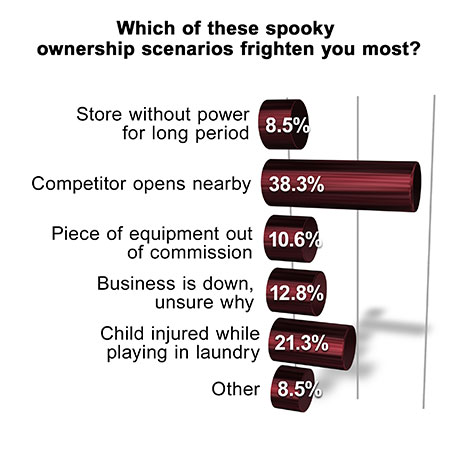 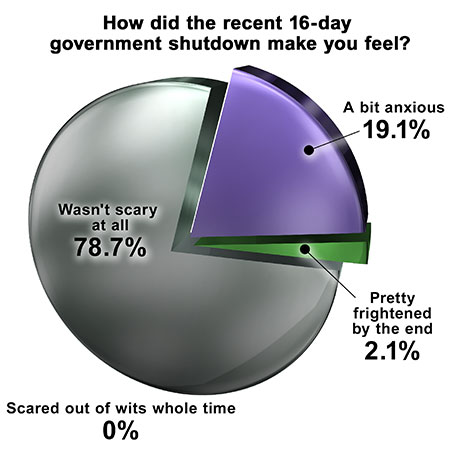 CHICAGO — Inspired by Halloween, this month’s American Coin-Op Your Views survey challenged coin laundry owners to admit their darkest fears. The majority of coin laundry store owners consider a “competitor [opening] a new store nearby” as the most frightening ownership scenario (38.3%).

Another 8.5% of respondents listed “other” scenarios, like a fire occurring in the store, or “something that would tarnish our brand, like a cockroach infestation,” says one respondent.

“Storms left one of my locations and a large part of the area with only partial power,” one says. “I was operating at less than half capacity with enough business for two stores.”

Some owners reported robberies occurring at their store, while others reported competition moving into their area.

“A wealthy man in the community bought a 300-unit, low-income apartment complex near my laundry,” says another. “It is hard to recover from a loss of so many customers at one time.”

Owners also weighed in on how they felt about the recent government shutdown. The majority said that “it wasn’t scary at all” (78.7%), while some admit that it did make them “a bit anxious” (19.1%). Only a small percentage felt “pretty frightened by the end” (2.1%), and no respondents reported feeling “scared out of [their] wits the whole time.”

While the majority of respondents say they weren’t directly affected by the shutdown, one owner says that his/her customers were impacted. “Many of my customers are volunteer camp hosts. They were unable to submit their laundry expenses for reimbursements during the shutdown. No problem for me, however, as they still needed to do laundry, and will eventually be reimbursed.”

And in terms of how they felt the government handled the shutdown situation, many store owners voiced their disapproval.

“I think it was handled poorly by both parties, since neither group is affected by the shutdown,” says one respondent. “If Congress was not getting paid, the matter would have been resolved.”

“Both parties handled it poorly,” echoes another. “If Congress would pass a budget and adhere to it, we [wouldn’t] have been in that mess in the first place. … Congress and the Obama administration are piling debt on not only us, but our kids, and their kids, as well. Until this changes, we will continue to teach our kids that it is OK to live above your means and have someone else pay for it.”