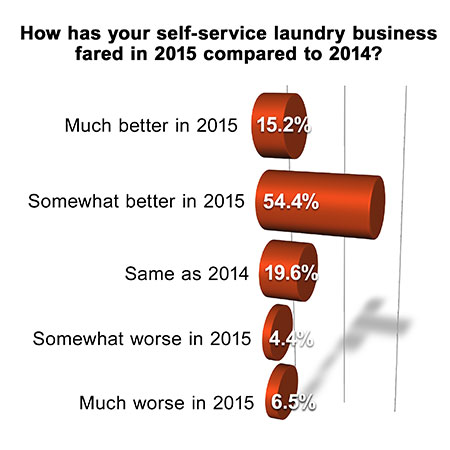 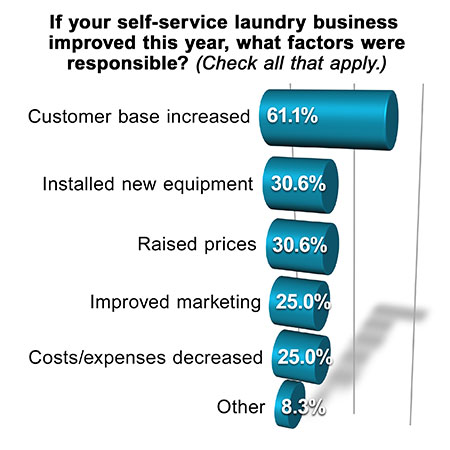 CHICAGO — The majority of coin laundry store owners polled (54.4%) say that overall business was “somewhat better in 2015” compared to 2014, according to results from this month’s American Coin-Op Your Views survey.

Roughly 61% of store owners say that a “customer base increase” was one of the reasons why their business improved this year, while equal shares of 30.6% attributed the improvement to “[installing] new equipment” or “[raising] prices.” (Respondents were asked to select as many as applied from six options.)

Equal shares of 25% chalked up the improvement to “improved marketing” or the fact that “costs/expenses decreased.”

Roughly 8% gave other reasons as to why they believe business improved, such as maintaining good customer relations and a clean store.

For those whose coin laundry business worsened this year, the majority (45.5%) believe “competition cut into business.” Equal shares of 36.4% attribute the dip in business to “customers [cutting] down on number of visits” or “costs/expenses [increasing].” And equal shares of 27.3% say that their “customer base decreased” or their “extra-service income dropped.” (Again, respondents could select any from among a list of six factors.)

Some store owners stated other reasons (18.2%) as to why business worsened this year.

Finally, store owners were asked to describe the “most notable change” in their laundry that occurred in 2015. Here are some of the responses:

While the Your Views survey presents a snapshot of readers’ viewpoints at a particular moment, it should not be considered scientific. Subscribers to American Coin-Op’s e-mails are invited to take the industry survey anonymously online each month. Percentages may not add up to 100% due to rounding.