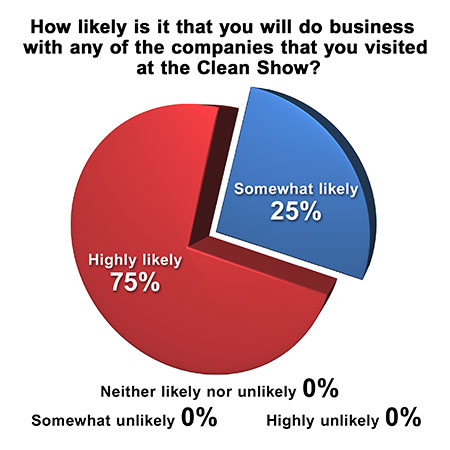 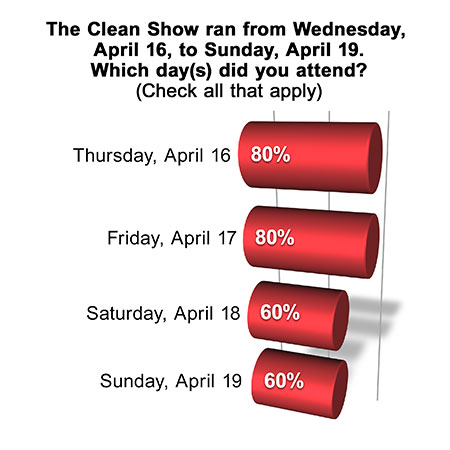 CHICAGO — The majority (75.0%) of operators who attended Clean 2015 in Atlanta say it is “highly likely” that they will do business with the exhibiting companies they visited, according to the results of this month’s American Coin-Op Your Views survey.

“[It] helped me decide what equipment to purchase next,” says one respondent. “The show helped me compare most brands side by side.”

The remaining 25% of respondents say it is “somewhat likely” that they will patronize an exhibitor seen at this year’s show.

Roughly 21% of all respondents said they attended Clean, while 78.9% did not.

The majority of those that did not attend say they had other obligations to attend to. Others cited budget constraints, while some believe that Atlanta is too far away from their location.

The first two days of the April 16-19 show proved most popular among respondents who did attend, with 80% on hand Thursday and Friday, and 60% in attendance on Saturday and Sunday.

Many operators say they like the show returning to a four-day schedule, with one saying he/she likes this format better than the 2013 show (which was a day shorter).

“I left early Saturday [morning],” one respondent says of the Atlanta event. “[I] had seen what I needed to see and was ready to get back home.”

More than 30 hours of educational sessions were presented during the show.

One respondent particularly liked the session, All Things Google: Tips and Secrets to Your Best Marketing Resource, hosted by the Coin Laundry Association. (Check back at www.americancoinop.com on Monday for the first of our two-part report on that session.)

While many respondents liked the overall quality of the educational sessions, there were those who thought the sound quality at some could have been better.

“The main floor was a terrible place to have a seminar,” says one respondent. “It was far too loud, and lighting washed out the screens.”