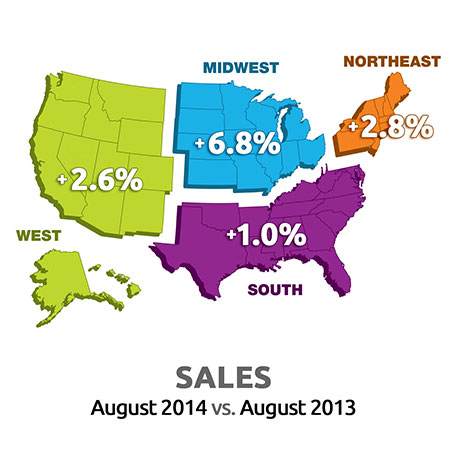 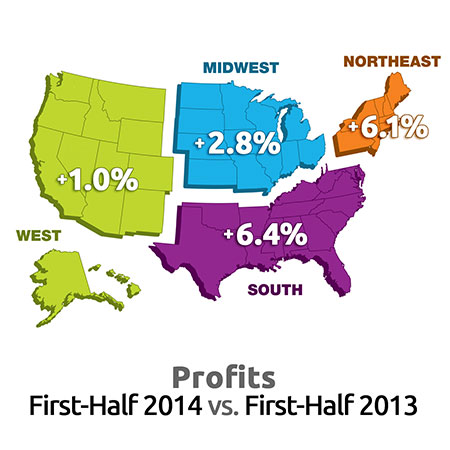 CHICAGO — August year-over-year coin laundry sales for all regions were up, with store owners/operators in the Midwest posting the strongest gains, up 6.8%, according to the results of this month’s American Coin-Op StatShot survey.

“In the past few years, there have been many changes in management/ownership of Laundromats in this area,” says one Midwest operator. “We are one of the few that have wash-and-fold service and are conveniently located near a refinery and pipeline work in Northeast Ohio. Business has been steady, and the self-service income has also seen an increase because we are one of the few in the area that is fully attended.”

Others in the region were not seeing the same results, with another saying, “[Market conditions are] terrible. [A] new larger Laundromat opened within three blocks [and I] lost half of my customers.”

Operators in the West and Northeast were neck and neck when comparing August sales, up 2.6% and up 2.8%, respectively, while operators in the South reported only a slight increase in year-over-year sales last month, up 1.0%.

“It’s a steady market,” says an operator from the South. “We are getting ready to do an advertising campaign to bring in new customers.”

“We have seasonal workers in town for harvest right now,” says another.

Many operators in the West are reporting increasing utilities costs.

“Water and [Pacific Gas and Electric Company] have gone up about 15%, and we have had to raise prices to cover most of the increase,” one says.

“Economy is not rebounding like we’re told, but utilities are going up,” says another.

“The market conditions are OK,” says a Northeast operator, “[but] the utility costs and workers [compensation] insurance hurts.”