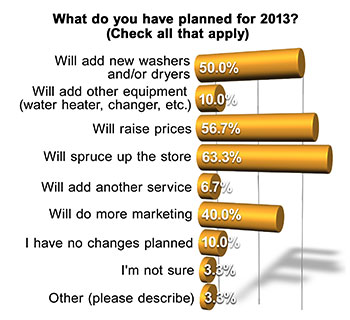 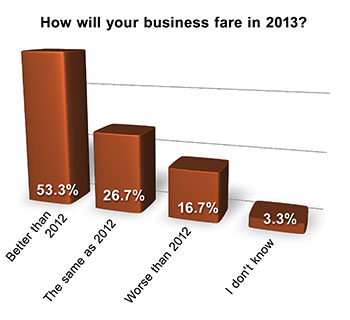 CHICAGO — More than half of respondents to this month’s AmericanCoinOp.com Wire survey say business was good (39.3%) or even great (14.3%) last year, while another 28.6% say 2012 business was average. The remainder—17.9%—call it below average.

Regardless of how their individual business fared, 58.6% say 2012 turned out as they expected. Thirty-one percent didn’t expect last year’s business results, and 10.3% weren’t sure what to expect in 2012.

Respondents were asked to list the best thing that happened to their laundry in 2012. There some expected responses, such as increasing or maintaining sales, adding commercial business, attracting more customers and putting in new equipment. Some mentioned the closing of nearby competitors.

And how about the worst thing to happen last year? The increasing cost of utilities, dealing with competition, and the re-election of Barack Obama received multiple mentions.

Weather factored into at least two responses: lightning struck one operator’s building and caused damage to many machines, while another had to make numerous repairs after a large hailstorm.

One respondent said opening a new store was both the best thing and the worst thing to happen last year.