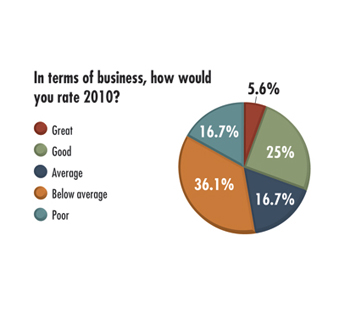 CHICAGO — More than half of the respondents say 2010 was below average (36.1%) or poor (16.7%) in terms of business, according to the latest Wire survey.
Twenty-five percent say 2010 was a good year for business, while 16.7% say it was an average year. Five percent call 2010 a great year for business.
Fifty-three percent say last year (regardless of how their business fared) turned out as they expected. Forty-two percent didn’t expect last year’s business results, and only 5% weren’t sure what to expect in 2010.
Respondents were asked to list the best thing that happened to their business in 2010. There were some expected responses, such as increased sales, adding commercial accounts, attracting more customers and putting in new equipment.
A good number of the “positive” responses made reference to simply being happy at the prospect of opening the doors for business in 2011.
What was the worst thing that happened to your business in 2010? Not surprisingly, about a quarter of the responses cited slumping business. The increasing cost of utilities, dealing with competition, trouble retaining employees and a continued poor economy all garnered multiple mentions.
Respondents also clued us in on their plans for 2011. Here’s what your fellow operators have planned: adding new washers and/or dryers, 25%; adding other equipment (water heater, changer, etc.), 16.7%; raising prices, 61.1%; sprucing up the store, 38.9%; adding another service, 11.1%; and doing more marketing, 33.3%.
Fourteen percent don’t plan to make changes for 2011, and 11% are not sure if they will make any changes.
Forty-four percent expect business to improve in 2011, while 19.4% expect business to decrease. Twenty-five percent expect business to be the same as 2010, and 11% don’t know what to expect in terms of business.
While the American Coin-Op Wire survey presents a snapshot of the audience’s viewpoint at a particular moment, it should not be considered scientific.
Subscribers to the Wire e-mails — distributed twice a week — are invited to participate in an industry survey each month. Click here and follow the menu instructions to sign up for the free e-mail service.