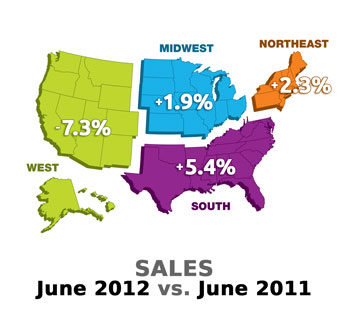 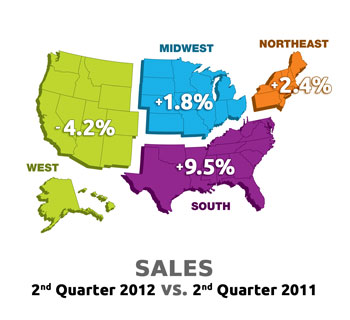 CHICAGO – Coin laundry operators in three of the four U.S. regions reported June sales increases compared to the prior year, led by the South’s 5.4% gain, according to the results of this month’s AmericanCoinOp.com StatShot survey. June-to-June sales in the Northeast were up 2.3%, while operators in the Midwest reported a collective 1.9% gain.

June sales in the West were down 7.3% compared to the same month last year. And the swoon was widely felt across the region, based on the survey results—nearly 90% of Western operators who responded say their sales declined.

“Too much pressure from corporate-owned apartment buildings adding laundry facilities!” lamented one operator. But another thinks things are looking up…for the newer generation of stores. “Old ’mats are shutting down left and right out West and it’s a great time … to build new stores and infrastructure.”

Survey respondents were also asked about their second-quarter sales. Combined sales for April, May and June were up substantially in the South (9.5%). Smaller gains were posted in the Northeast (2.4%) and Midwest (1.8%). Quarterly sales were down 4.2% in the West.

A sampling of operator comments: