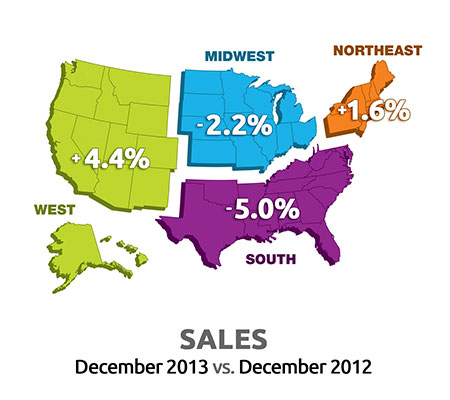 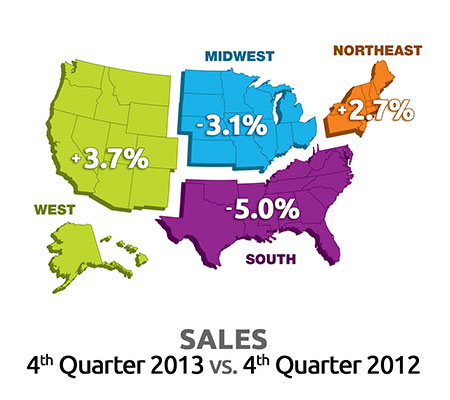 CHICAGO — Coin laundry store owners in the West had much to celebrate during the holiday season last month, as year-over-year sales in December for the region was up 4.4%, according to results from this month’s American Coin-Op StatShot survey.

Regarding current market conditions, one store owner from the region says he/she is seeing “a ton of new construction, both commercial and residential [which] makes our business stronger every year.”

Other store owners from the region are singing a different tune.

“Competitors [are] giving away service,” one says.

“[It’s] hard to make a living with rent and utilities going up,” adds another.

Operators in the Northeast also saw an increase in year-over-year sales last month, up 1.6%, while operators in the Midwest and South saw sales fall 2.2% and 5%, respectively.

“We had a fire in 2013, so volume is understandably low,” says a store owner from the South. “Market seems to be improving.”

“[There are] too many Laundromats and not enough customers to keep all stores doing well,” says a store owner from the Northeast.

The majority of store owners in the Northeast, however, reported ending the year on a good note, as fourth-quarter 2013 sales in the region were up 2.7% over the same quarter last year.

In starting the new year, many store owners say the recent “polar vortex” has had an effect on business.

“The year is starting out much worse than last year,” says a store owner in the Midwest. “Midwest weather has had a negative impact on sales and expenses.”

“[It’s] brutally cold,” adds a Northeast store owner. “No one wants to leave their house.”