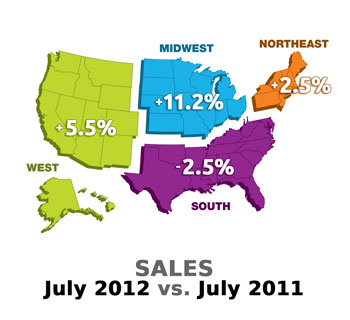 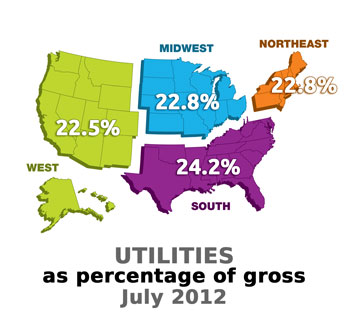 CHICAGO – July is traditionally one of the weakest revenue-generating months of the year but you wouldn’t know it from looking at the results of the most recent AmericanCoinOp.com StatShot survey.

Self-service laundry operators in three of the four regions reported their sales increased in July, led by the Midwest with an impressive 11.2% gain compared to July 2011 sales. The West posted a 5.5% July-to-July sales increase, while the Northeast posted a respectable 2.5% rise.

The South reported the only month-to-month loss, 2.5%. Nationally, coin laundry sales were up an average of 3.3% in July compared to July 2011.

Coupled with increasing sales, running a self-service laundry as efficiently as possible is important to a business’ bottom line. Operators were asked about their utilities costs as a percentage of gross.

Those in the West fared the best, paying 22.5% for utilities in July. But the gap between all four regions was minimal. Operators in both the Midwest and the Northeast paid 22.8% for utilities last month, while operators in the South paid the highest percentage in the country, 24.2%. Nationally, utilities as a percentage of gross averaged 23.1% in July.

How did some operators keep their costs down? By installing wells to replace municipal water, installing a timer (presumably to turn on/off lights), or replacing one-third of the store’s washers with 340-G soft-mount machines, netting a 3% savings on utilities. Another said installing credit card readers throughout their store had produced “impressive results.”