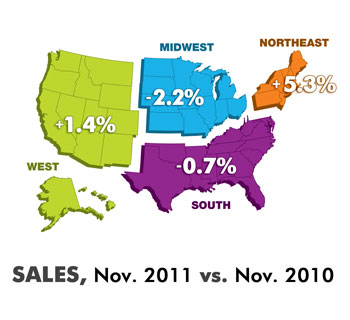 CHICAGO — Self-service laundry sales were a mixed bag in November, with two regions reporting increases and the other two lamenting drops, according to the most recent AmericanCoinOp.com unscientific StatShot survey.

November sales in the Northeast were up 5.3%. Fifty-three percent of the operators experienced an increase in sales, most of them double-digit increases.

Sales rose 1.4% in the West, where about half of the operators had increases.

In the South, sales fell 0.7%. Operators reported having been impacted by increasing utility costs, a recently passed immigration law, layoffs among NASA clientele, and bans on the local fishing trade.

The Midwest saw the country’s biggest sales decline, 2.2%, for November. “Still very flat here in Michigan. People put more in each load and come in less often,” says one operator.

“The market is pretty bad,” adds another. “Most self serves are starting to move into the commercial sector to stay afloat.”

Respondents were also asked about November 2011 front-loader prices — their lowest prices, highest prices, and whether the prices had changed since the previous November. The lowest and highest prices varied quite a bit.

In the West, customers can get a front-load wash for as little as $1.50. The lowest-priced front-load washes range from $1.50 to $3.75. Nearly 88% of these prices were unchanged from November 2010. The remaining 12.5% of respondents have raised their lowest-price wash in the last year.

The price range for the most expensive front-load washes in the Western region is $2.75 to $7.89. Every respondent reported these prices were unchanged from a year earlier.

Southern customers face the widest price range of all regions — $2 to $17.50. Nearly 58% of operators reported having raised their high-end price since November 2010, and the remainder were unchanged.

In the Northeast, the most inexpensive front-load prices are $1.50 to $5.50. Just 6.7% of operators have raised their prices in the last year, while the remainder has kept the prices unchanged.

When it comes to the most expensive wash, Northeastern customers are paying $2.25 to $8. Approximately 21% have raised this price compared to November 2010, while the remainder has stood pat.

The most inexpensive front-load prices in the Midwest range from $1 to $4.50. Just 5.9% of operators have raised their prices in the last year, while another 5.9% have lowered them. The remainder has kept prices unchanged.

When it comes to the high side of front-load prices, Midwestern customers face a range of $2.50 to $8.79. Some 12% of respondents have increased prices, with the remainder keeping the status quo.

The statement that "The price range for the most expensive front-load washes in the Western region is $2.75 to $7.89" is not entirely true. I've responded to this survey 3 times representing 3 of my laundromats. In all 3 responses, my high-end front-loader prices were listed at $12.50 and $13.75, with 2 out of 3 being increased over November 2010.

On one hand, I understand the need to omit extremes in the data set to obtain semi-accurate statistics, but on the other hand, a 29% error in reporting doesn't exactly present an accurate picture of the environment, does it?

This will allow a better comparison. Thanks!

My front load p-10's are at $1.25. All I have ever put in the remaining ones I have are a key to take out money. Not too shabby for 26 years and only 5 gallons of hot water, if used. I have several little old ladies who have only 10 pounds of laundry a week and on SS. The washers take the overloads from my 35 pound Milnors. My top loaders are $1.75, with 16 gallons of hot water.

We charge $1.50 for a 18# front load Wascomat. Prices go up from there on larger machines. We at Super Suds in Long Beach, Calif do not have any "top loaders". Sanford

Useless information. Should seperate different capacities and list range in price for each.

That was 3 minutes of my life I'll never get back

theres a survey that helps me compare my store to others and my cost/expense ratio........