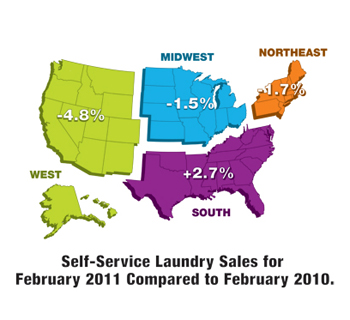 February sales in the Midwest (compared to February 2010 sales) were down 1.5%. Forty-two percent of the respondents report a decrease in sales, while 30% report an increase. Sales were unchanged for 28% of respondents.Sales in the West dropped 4.8%. Several respondents reported decreases of more than 20%. On a slightly more positive note, there were an equal number of operators reporting sales increases and decreases.Things were a bit better in the South. February sales were up 2.7%. Fifty-eight percent of respondents reported a bump in February sales. January sales were up 2% in the South.Northeastern operators experienced a 1.7% dip in January sales. Nearly 47% of respondents reported a decrease in sales, while 30% reported a sales boost. Sales were unchanged for 23% of respondents.Respondents were also asked about drop-off-service sales for February 2011 (compared to February 2010). The numbers varied quite a bit.In the South, drop-off-service sales were up 5.9%. Three-quarters of respondents have been offering drop-off service for more than two years. Twenty percent don’t offer drop-off service.Midwestern operators saw drop-off-service sales tumble 5.3%. Nearly 75% of the respondents have offered this extra-profit service for more than two years.Western operators experienced a 6% sales drop in February. Only 53% of Western respondents have offered drop-off service for more than two years.Drop-off-service sales in the Northeast shot up 8% in February. Several operators report sales increases of more than 25%.Slightly more than 85% of the Northeastern respondents have been offering drop-off service for more than two years.While sales figures continue to be erratic at best, we are starting to see some more positive comments about business conditions. A handful of respondents claim, “business is slowly returning.” Others say drop-off-service revenue has helped ease their burden, while a small group of operators say commercial work, teamed with drop-off service, has made their business picture a bit brighter.AmericanCoinOp.com’s StatShot includes information on sales, wages, costs or other financial data based on anonymous survey information provided by industry owners and operators.Audience members are invited to participate in these unscientific surveys, which are conducted online via a partner website, on a regular basis. Self-service laundry operators are encouraged to participate, as a greater number of responses will help to better define industry trends.