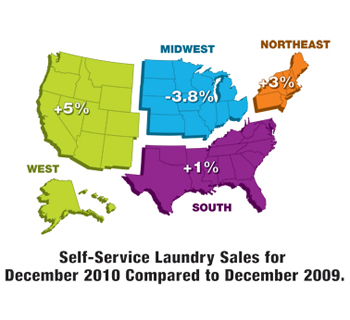 CHICAGO — December sales rose in the South, West and Northeast, while Midwestern operators saw sales fall after they had risen in November, according to the most recent AmericanCoinOp.com unscientific StatShot survey.
December sales in the South (compared to December 2009 sales) were up 1%. This might be somewhat misleading since about 60% of operators had a sales decrease. However, a good number of operators experienced healthy sales increases, which offset the larger number of decreases.
Western operators saw sales jump 5% in December. More than three-quarters of the respondents reported a sales increase. November sales were up 1%.
There were plenty of positive comments by Western operators. Most revolved around business picking up after raising prices and how things finally seem to be heading in the right direction.
December was not a good month in the Midwest. Sales dropped 3.8% after rising 1.2% in November. Only about a quarter of the respondents reported an increase in sales.
The general consensus by Midwestern operators is that high utility costs are still plaguing business and that the overall business climate remains stagnant. On a more optimistic note, several operators were encouraged by their early January sales figures.
Sales increased 3% in the Northeast, as nearly 60% of respondents reported an increase. Sales rose 1% in November.
As in the West, several operators credited sales increases to higher vend prices. Several operators also said the sales increase was the result of tweaking their operation.
Respondents were also asked about their 2010 fourth-quarter sales (compared to 2009 fourth-quarter sales).
Fourth-quarter sales rose 1% in the South, and 2.5% in the West. Midwestern operators experienced a 3.3% decrease in fourth-quarter sales, while Northeastern operators had a 3.2% sales increase.
While it’s too early to draw any conclusions about the latest numbers, it has been encouraging to see November and December sales increases in nearly every region.
AmericanCoinOp.com’s StatShot includes information on sales, wages, costs or other financial data based on anonymous survey information provided by industry owners and operators.
Audience members are invited to participate in these unscientific surveys, which are conducted online via a partner website, on a regular basis. Self-service laundry operators are encouraged to participate, as a greater number of responses will help to better define industry trends.
Click here and follow the menu instructions to sign up for the free e-mail service.