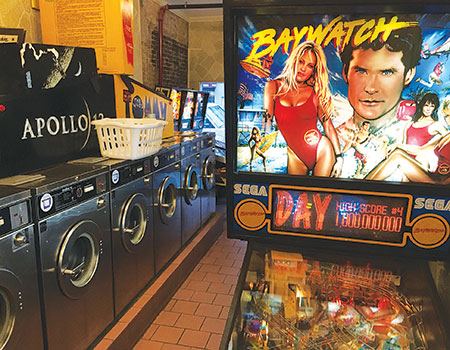 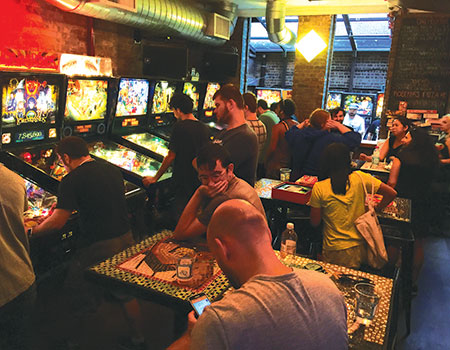 BROOKLYN, N.Y. — As The Who song goes, He’s a pinball wizard/There has to be a twist.

At his Sunshine Laundromat & Pinball, stainless steel front loaders and stack dryers are upstaged by coin-op machines of a different breed.

I found myself in the trendy Greenpoint neighborhood in mid-August and discovered it’s hip to hang out at the laundry on a Saturday night. The summer heat wave had taken its toll on wash patron volume, and those who did venture in quickly retreated to the rear bar oasis via a stack dryer.

Behind the faux dryer lies a bar and pinball emporium where natural wood and exposed brick contrast with backlit works of art showcasing more than two dozen of the most sought-after games standing toe-to-toe where dryer tumblers and folding tables once lined up.

Not to be overshadowed, the immaculate — albeit intimate — 23-machine laundry space at the front of the house is adorned with decorative lighting fixtures hanging below a high canopy of wainscoting panels and crown molding trim.

Sunshine’s funky fusion of bubbles and bumpers is as much about Rose himself as it is a testament to his determination to preserve a quaint neighborhood self-service laundry amid rapid urban gentrification.

Rose’s passion for pinball as a teen gave rise to a career servicing game outlets throughout New York. His sale of a used bill changer to Sunshine’s previous operator a decade ago led to a close friendship that eventually culminated with the outdated store changing hands in 2011.

Rose quickly rolled up his sleeves, repaired the laundry equipment, and spruced up the space with bright lights and a kitschy décor while squeezing in as many pinball machines as he could, including adding a tier above some washers.

As part of the overhaul, the entire facility was upgraded with extensive soundproofing and enhanced fire-suppression systems. The back section now houses 26 of the 31 pinball machines, a coin-op fortune-telling monkey, and a tap room serving beer, wine and pizza, while the front half boasts a compact drop-off station, eight new stack 30-pound tumblers, 15 front-load washers with upper-tier pinball displays, and five floor-level pinball machines.

With the space partitioned and only a handful of games in the laundry, the competitive gaming takes place out of sight of basket-toting patrons. The front nevertheless retains plenty of color with Atari’s trend-setting video game Area 51 Maximum Force Duo housed inside a single-pocket tumbler just steps from the entryway.

The fully operational, two-player gun battle was relocated from the rear of the store, where it was originally offered as an inline gaming option to drying. Rose salvaged the machine after a customer’s load went up in smoke and, rather than repairing it, cut the outer drum, installed the video monitor, and wired it to the original coin drop and selection buttons.

“People’s reaction was ‘What did I just see?’ and then they realized it worked,” Rose says. “It was amazing to see their expressions.”

The dryer-cum-video game now occupies a slot next to an unconventional glass front vendor offering up detergent alongside personal hygiene products — some banded together with Chinese finger taps and other assorted bonus trinkets.

Rose reports that combined self-service and drop-off laundry revenue still outpaces pinball. His most devoted players are millennial males, but is seeing more and more coins being dropped in by a growing contingent of female patrons, many of whom participate in a biweekly league and tote wash to the competitions. Minors are permitted access to the games, although the owner encourages play during off-peak bar times.

Sunshine operates almost around-the-clock as the last machine cycle and final ball in play usually stretch well into the wee hours of the morning.

“It’s been amazing to find that here in New York City, where pinball has all but been forgotten, that so many are as fascinated as I am,” Rose smiles. “Pinball players are themselves pleasant customers and, after a while, it turned into something wonderful.”

Read Parts 1 and 2 of this story HERE and HERE.