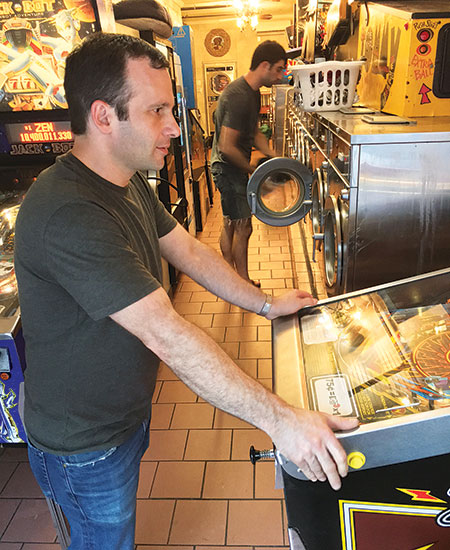 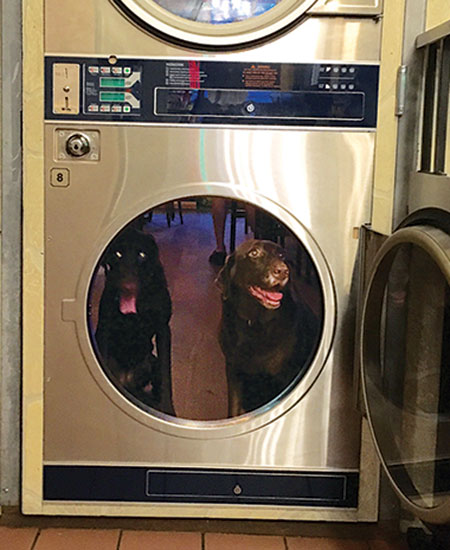 BROOKLYN, N.Y. — As The Who song goes, He’s a pinball wizard/There has to be a twist.

At his Sunshine Laundromat & Pinball, stainless steel front loaders and stack dryers are upstaged by coin-op machines of a different breed.

I found myself in the trendy Greenpoint neighborhood in mid-August and discovered it’s hip to hang out at the laundry on a Saturday night. The summer heat wave had taken its toll on wash patron volume, and those who did venture in quickly retreated to the rear bar oasis via a stack dryer.

“The entrance had to be a joke and what’s more obvious than a dryer door,” he quips, yanking the top handle, swinging open the stainless steel-clad doorway while pointing down to the lower grip where passage is provided to his free-roaming labradors, Scrapple and Choco.

Behind the faux dryer lies a bar and pinball emporium where natural wood and exposed brick contrast with backlit works of art showcasing more than two dozen of the most sought-after games standing toe-to-toe where dryer tumblers and folding tables once lined up.

Moonlight is drawn in at the back atrium, casting a glow on players performing a well-executed “drop stop” or “flip trap.” The gaming theme carries through to the washroom where a wall-mounted pinball flipper serves duty as the toilet flusher and an antique mirror is illuminated by play-field pop bumpers.

“This is truly a pinball bar, not a bar with pinball,” Rose emphasizes.

Not to be overshadowed, the immaculate — albeit intimate — 23-machine laundry space at the front of the house is adorned with decorative lighting fixtures hanging below a high canopy of wainscoting panels and crown molding trim.

Sunshine’s funky fusion of bubbles and bumpers is as much about Rose himself as it is a testament to his determination to preserve a quaint neighborhood self-service laundry amid rapid urban gentrification.

And when in-unit and centralized laundry facilities began invading Greenpoint’s new low-rise apartment developments, it was “game on” to retain clientele.

“Without doing something, our days would be numbered,” the operator comments. “To increase our longevity, it was best to be proactive.”

Rose’s passion for pinball as a teen gave rise to a career servicing game outlets throughout New York. His sale of a used bill changer to Sunshine’s previous operator a decade ago led to a close friendship that eventually culminated with the outdated store changing hands in 2011.

Rose quickly rolled up his sleeves, repaired the laundry equipment, and spruced up the space with bright lights and a kitschy décor while squeezing in as many pinball machines as he could, including adding a tier above some washers.

He whittled away at the oversized drop-off counter, realizing that for every three feet he lopped off he could shoehorn in another game. The hybrid laundry-game parlor soon had more pinball slots than dryer mechs, and customers and employees alike took it all in stride.

“We started hiring pleasant attendants; people who were fun and wanted to be here,” he recalls. “The place had a better vibe to it. People would smile and be happy.”

Longtime Greenpoint resident Matthew Gross, who was doing his wash, remembers Sunshine sans pinball. “I just went home to do the dishes after loading up,” he says.

A pinball enthusiast at heart, Gross now frequents the establishment more often. “I’m much better at doing laundry these days. There’s never a week I don’t do it.”

The 32-year-old patron even celebrated a birthday with friends at the coin-op. “People still tell me it was one of the best birthday parties they ever went to,” he says.

While interspersing games among washer bulkheads and dryer banks scored points with patrons during the first few years under his direction, Rose took aim at an ambitious project in 2015 to carve out spaces devoted to each activity.

The move would keep the washers and dryers humming while also ensuring his venue remained the epicenter of pinball for “league-approved” play in The Big Apple. Scrapping single-pocket tumblers and installing stack models up front provided ample room for the bar area.

“Pinball and beer go together. We just wouldn’t add a bar to the Laundromat,” he explains.

Check back Monday for the conclusion!