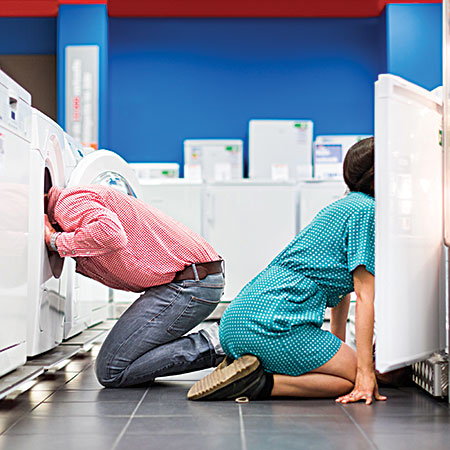 CHICAGO — Choosing a store location often means paying attention to demographics like the nearby rental population, household size and income level, mindful that lower-income households are less likely to have in-unit washers and dryers and thus have greater need of a Laundromat.

But what about the higher-income demographic in your area? Is there a way to entice the folks who have washers and dryers at home and perhaps some disposable income to try out your store?

You can demonstrate how using a vended laundry makes processing hard-to-clean items like comforters a snap while turning “laundry day” into “laundry hour.”

One way is to offer larger-capacity washers and dryers to your walk-in customers (as documented in Go Big and Go Home). Another is to promote using your wash-dry-fold (WDF) service to process big, bulky items like comforters or sleeping bags or seasonal items like blankets.

When Dave Avenarius was drawing up specifications for a 2,500-square-foot store to be built in Glenville, N.Y., in 2010, the landlord of the shopping center where it was to be located made him an offer that turned out to be a plus for offering WDF service.

Another 900 square feet became available next door, and the landlord told Avenarius he could utilize it at no additional cost. “So, I used it to create a wash-and-fold center.”

“I actually put four double-load washers and a stack 30 dryer in our wash-and-fold center that are just for that purpose,” he says. “Customers can look in there. We built our own rolling gate, so even when it’s closed, you can look in there.

“You can see that your clothes are getting washed with exclusive machines. … It just gives it a little bit different element: ‘Ooh, that wash and fold is like its own little business.’”

The demographic in the immediate area is of a mixed-race population, and there are 400-plus “higher end” apartment units surrounding the strip mall that houses Avenarius’ store called Cunningham’s Laundry, he says. There are a lot of retirees living in the quad units that share a washer and dryer in a common lobby.

Some factors, such as a busy schedule or unfamiliarity with cleaning certain items, lend themselves to generating more WDF business.

“That person is a little bit better off,” Avenarius says of the nearby residents. “They don’t have enough time (to do their laundry) because they’re a busy professional and they’ll drop off their product and we turn it. Or they may be older individuals who might’ve lost a significant other who generally did that work and they come in and drop that off. There’s a wide variety of items that they do bring in.”

Avenarius says he just put up seasonal signage with a fall scene that reads, “Now is the time to get those big, bulky items cleaned for the winter. Come in now and use our large machines.”

When planning to bring in unique items for cleaning, you can leave one at home: Avenarius, who owns three Laundromats in total, doesn’t allow horse blankets in them.

Having been raised on a dairy farm himself, Avenarius has nothing against animals “but 99% of my customers don’t want to smell a dryer that’s had a horse blanket in it. It just radiates through the store. It’s something that we put signage up for.”

Ed Ellis, co-owner of 1 Clean Laundry in St. Cloud, Fla., says his business promotes its WDF service generally and as it relates to special items.

“I target comforters quite a bit because they’re easy for the staff to do, and they’re one revenue stream. We have sandwich board signs that sit outside the front of the store and they’re strategically pointed toward the Planet Fitness gym, two doors down in the same plaza. The people going into the gym will see the WDF and promoting the comforter washing. We do it that way to target those folks with disposable income.

“People with gym memberships tend to be busy professionals, quite often, and they don’t have the time (to do laundry). It’s a good way to spark their interest, even if they just come in to inquire about it. Sometimes we get them, sometimes we don’t.”

The store also offers WDF service to some unique local businesses: “We have heavy-duty degreasers to get the (auto) mechanics’ wear clean. We also do (towels and smocks for) barber shops, (tablecloths for) catering companies.”

While these could be considered commercial accounts, it’s up to the individual businesses to drop off and pick up their goods.