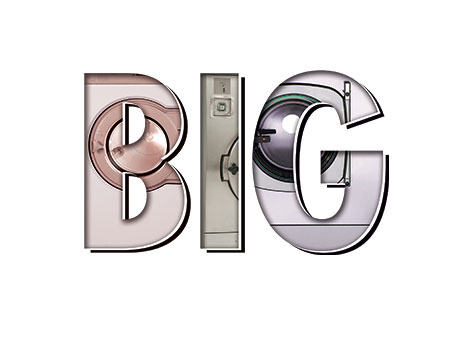 Ability to do laundry in one big machine attractive to customers

CHICAGO — Offering customers the ability to do bigger loads using large-capacity equipment can help decrease turnover and reduce the number of loads each has to do. While washers and dryers in the 20- to 40-pound range still make up a significant share of equipment in Laundromats today, it’s not unusual to see a few machines twice that size or larger in the same equipment mix.

Indeed, when time is at a premium, there’s something very attractive about having the ability to do one’s entire laundry in one big machine instead of a bunch of smaller ones.

Jock Jouvenat’s Value Clean Laundromat in Roseburg, Ore., opened in May 2001. Through the years, Jouvenat gradually increased Value Clean’s laundry capacity, both by adding Dexter machines for general use, as well as behind the counter when he established a drop-off laundry service.

First were three stack 50-pound dryers. Then came an 80-pound OPL dryer behind the counter for drop-off laundry service. When Jouvenat discovered the 75-pound washers he wanted to acquire were no longer being made, he took his distributor’s advice and purchased two 90-pounders instead. The high-capacity washers fit within the existing space.

“We have received nothing but glowing reviews from our customers, who love how their laundry comes out virtually dry, which means they spend less total time doing laundry,” says Jouvenat.

The larger machines are aesthetically and operationally pleasing, he adds, plus he likes the extra capacity because it means that drop-off laundry doesn’t get held up in the queue for one of the 75-pounders.

Miguel Beckles owns three stores in greater Atlanta: two in Marietta and one in Buckhead, an affluent uptown district. He’s been in the laundry business only about 2½ years, coming from a background in marketing and brand management.

When the Buckhead store he now owns, called Splash Laundry, was originally built in 1999, the surrounding area was low-income in nature. Investment in the store lacked and equipment was not well maintained, he says.

But after the Great Recession, Buckhead began to gentrify and phase out low-income housing. With condominiums and an upscale supermarket under development nearby, Beckles took advantage of the opportunity and bought the location.

“The higher-income person gravitates to the bigger washers, even if they have 20 pounds (to wash),” Beckles says. “I would say the upper middle class, male or female, no matter what, they like the bigger machines.

At Joe Basile’s Lantana, Fla., store called The Laundry Tub, there are 38 washers and 46 dryers in a variety of capacities. But it’s not unusual for customers to wait in line to use Basile’s biggest machines, two 90-pound Continental ExpressWash washers.

“The 90s we have found to be very popular, especially on the weekends when we’re busy,” Basile says. “People want to get in and get out, and the amount of clothes they can handle is considerable.”

The large machines are centrally located and get lots of attention from passersby.

Does he promote the larger equipment in some way?

“They speak for themselves. Other than a mailing before we opened (June 2015), we have not done any marketing or advertising for the store. It’s a lot of word of mouth. A lot of people talk about the store, how clean it is, how friendly the people that work there are, how well the machines work, and how they’re in and out of there in less than an hour.”

It’s common for laundry owners to offer mid-week or off-hour specials, and Basile is no different. But there are certain machines that are never discounted.

“Everything in the store, when I do a special, which is off-hours, the middle of the day, Tuesday, Wednesday, Thursday, the only machines that do not get discounted are those 90-pound machines,” he says. “Those are $15 per cycle.”

Hindsight is always 20-20, and Basile says that knowing what he knows now, he would double the number of large-capacity washers.

“If I built another store, I would have four of them,” Basile says. “I’ve had as many as 14 turns in a day (on one of the 90s). People were going out and coming back later. If we had been giving out numbers, they would have taken one.”