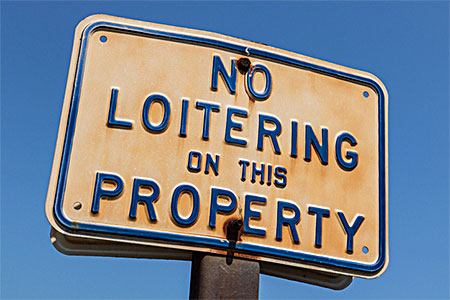 There is right way, wrong way to ask someone to leave your laundry

GLENDALE, Ariz. — Many of us have experienced loitering by the homeless or others at one time or another. It’s a big problem that can literally ruin your laundry business by scaring customers away. It must be dealt with if your business is to thrive.

For some of you, especially those running unattended stores, the problem is chronic. Loitering, especially by the homeless, is a social problem that is much bigger than us alone. It really is a problem that must be dealt with by our politicians, but don’t hold your breath for that.

Years ago, New York City Mayor Rudy Guiliani did a fantastic job cleaning up the streets of NYC with his “broken windows theory,” but after he left office, the homeless problem returned.

So what can be done if you’re experiencing loitering where you are? Here are some more tips to help:

If a loiterer has been asked to leave but refuses, the attendant needs to call the police. But before doing that, attendants have another tool: to blame you.

Attendants are afraid to call the police for fear of personal reprisal, so what we would do is to have the attendant say this on their second attempt: “My boss is always checking the cameras. If he sees you here, he will call the cops, so you are better off leaving now before he catches you.”

This takes a lot of pressure off your attendant by allowing them to “be a friend” to the loiterer by warning them about the “boss.” It also tells the loiterer that they are being recorded on camera, which raises their discomfort level.

Some will leave at that point, however, some will still not leave!

(Loiterers should never be asked to leave based on their color, creed, race, or sex. They should only be asked to leave based on the clearly documented fact of their unacceptable behavior and that they are not paying customers! Anything more than that and you will be flirting with violating their constitutional rights. Besides, you don’t want to risk a lawsuit. So make sure your attendants are clearly trained in the right way vs. the wrong way to ask someone to leave.)

TIME TO CALL THE POLICE

If you are remotely monitoring your store, and you asked the loiterer to leave or the police will be called, then you must follow through and call the police. If your store is attended, your attendant should quietly and discreetly call 911 and tell the operator there is a scary person loitering in your store.

A loitering report is low priority for the police, so it could take some time before they come. In NYC, police must answer the call, but when they come is a different story. This brings me to the next solution.

ESTABLISH A RELATIONSHIP WITH YOUR LOCAL POLICE

Many police departments will have some kind of way to reach out to the business community. In NYC, every local precinct has at least one “community officer” in charge of helping to resolve problems such as this.

They do have their methods, such as sending a patrol car around at various times to keep vagrants on the defensive. I’ve seen them go into parking lots to scare off sleeping vagrants. I’ve found that calling the community officer helps, but it’s much more effective if you show up in person to explain your problem. It’s not just that they are helping you, you are also helping them by giving them a set of eyes and ears in the neighborhood. The police need to be connected to the neighborhood.

When you meet with your local police, I also found it helpful to tell them who is routinely selling beer or liquor to vagrants. They may decide to turn the heat up on those establishments.

By taking action to help the homeless in your area, you’ll be doing your community, and the homeless, a big service, not to mention addressing your store’s issues with loitering.

Paul Russo owned and operated multiple Laundromats in New York City for more than 40 years before retiring in 2018. He’s a regular on the Coin Laundry Association’s online forum, posting under the pseudonym “Paulie B.” Any questions or comments for Russo may be directed to Editor Bruce Beggs, [email protected]

Contemplating buying a store for sale? In this episode, Tod Sorensen of Girbau North America and Continental Girbau West breaks down the criteria you can use to decide if acquiring a certain existing laundry would be a good investment.