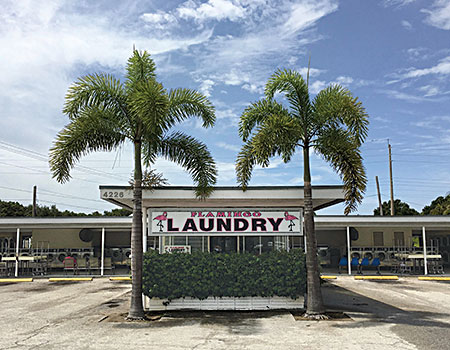 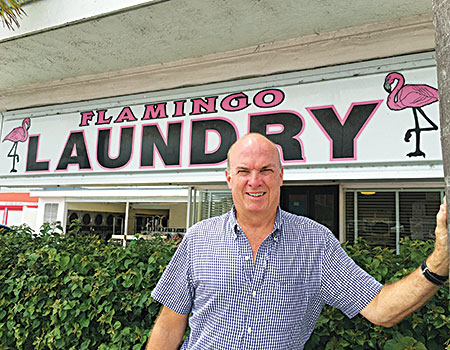 VERO BEACH, Fla. — As cold winter winds begin to howl across the northern tier of the country, you can’t be faulted for being jealous of Reynolds Smith. His coin-op’s windows here don’t ice up, and snow never blocks the entryways. You see, Flamingo Laundry has neither storefront glass nor doors.

Open-air self-service laundries are almost as old as the industry itself. Their quirky design harkens back to the days of the clothesline when laundry was done where nature intended. The format became a fixture throughout the Sun Belt where there was no necessity to enclose the premises to shield it from the elements. Yet, over time, the concept fell out of favor as panes of glass were erected between the customer and the outside world.

While it’s easy to wax nostalgic for the open-air coin laundry and romanticize the past, there is no doubt as to the simplicity and convenience of this quintessential self-service model.

“They back their car up, pop their trunk, and just load it right into the machine,” Smith smiles. “Wherever they park, it’s right there.”

Smith, who has 35 years of ownership under his belt and operates both open and enclosed storefront coin-ops on Florida’s eastern Treasure Coast, sees the wash trade — like others — moving behind closed doors.

“I remember visiting Lowe’s for the first time over a decade ago and thought to myself, ‘Here’s a lumber yard that’s enclosed and air-conditioned.’ The world is definitely going towards air conditioning, and customers expect it,” he says. “I don’t see anyone building open-air stores anymore — they might be doing it out there but I haven’t seen it.”

The freestanding Flamingo Laundry made its debut in Vero Beach in 1955 when Smith’s uncle laid out a single line of machinery covered by a 12-foot overhang. Expansion in the 1960s tripled the store’s depth and provided for an enclosed central station to bisect the two open wings. With its wide 100-foot frontage, the coin-op became a beacon in the night along the Florida Highway 60 arterial.

In the early ’80s, Smith, who was fresh out of college, and his younger brother Scott, a fireman by profession, purchased Flamingo and acquired other laundries, including a smaller, unattended 20-year-old open-air location. The pair thrived with fixer-upper laundries and presently operate four stores, two of which have no front door and no last load.

The multi-store operator doesn’t believe he loses out trade to air-conditioned stores.

“Customers get comfortable with the attendants and the store. They’re loyal, and I don’t think they’d drive out of their way to go to another store,” he says, adding that his open-air laundries are conducive to social interaction between regulars. “We had a group of ladies coming each week for a decade. They could have done their laundry at their houses yet they’d come in and have fun.”

Weekly Flamingo patron Pat Ryan, who was folding up the last of her weekly wash on this particular 90-degree afternoon, says she doesn’t mind forgoing an air-conditioned setting.

“I don’t find anything wrong with it, and they have fans,” she says. “I can do my laundry and sit in my car if I need to.”

Attendant Cathy Thomas notes that parents who tote their children along with the laundry give the nod to an open-air format.

“It’s more comfortable for the kids and doesn’t get hot and stuffy,” she explains. “For them, it still feels like they’re outdoors, and that’s what they like about it.”

Thursday’s conclusion: What happens when the rains come?