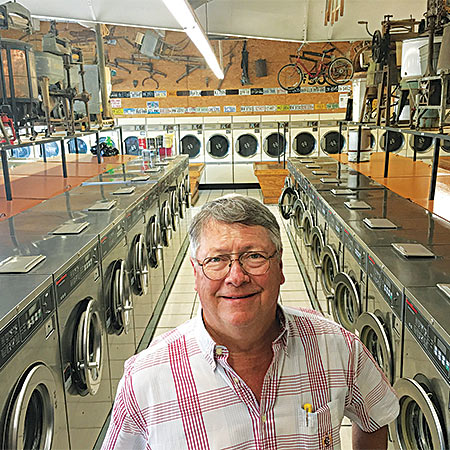 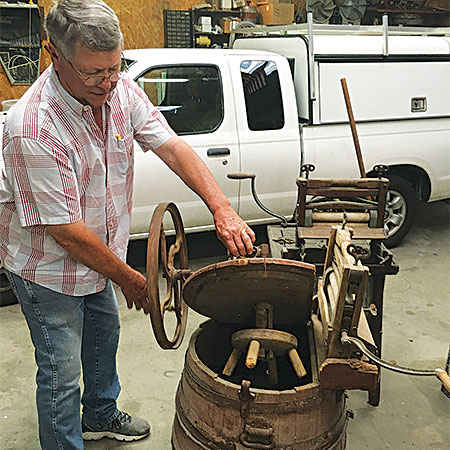 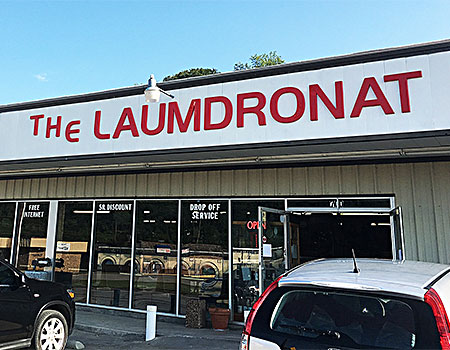 Soak in this tribute to American ingenuity

MINERAL WELLS, Texas — Lucky Volkenant and Fred Wilson have set the bar pretty high when it comes to over-the-top coin-op décor. Although separated by a thousand miles, the two operators are cut from the same cloth, both upstaging their rural, small-town laundries with novel attractions.

Wilson’s washing machine museum is a true slice of Americana. His treasure trove of four dozen antique tubs may not match the capacity of the 29 front loaders on duty inside this Texas coin laundry, but they sure can crank it out.

Finding a museum inside a coin-op isn’t the only odd thing here. First-time visitors do a double take of the bright red facia sign spelling out “The Laumdronat” — an intentional letter flip, as well as a tip of the cowboy hat to the Texas-based Kwik Wash chain and its iconic upside-down laundry logo.

The price of admission is merely a basket of dirty duds, but visitors are free to stop by and gain an appreciation of the advancements in laundry.

“Nobody should complain about washing clothes today,” says the longtime industry veteran. “It’s so much easier and better than it used to be, plus you can walk off and leave them.”

Not everyone agrees. Years ago, one regular voiced his displeasure at front-loader vend pricing under the mistaken belief he was helping foot the bill for the growing roster of old collectibles by ponying up an extra quarter or two at the coin drop.

“I could lower the price of a washer,” Wilson recalls telling the patron, before advising him of the alternative. “We could get one of those hand-operated models down and you could go chop your wood, boil water, pour it in, and hand-crank it for 10 cents a load if you want.”

Empty your basket into any of Wilson Coin Laundry’s computerized washers, deposit some quarters, and stare away at clothes sloshing away. Better yet, take a stroll to a bygone era and soak in this tribute to American ingenuity.

Morning sun flooding the store adds a warm glow to the copper wash tubs without hiding weathered wooden legs and rusted fittings. The lineup of early 20th century relics extends the length of the twin back-to-back bulkheads atop purpose-built platforms near eye level, making for good sight lines and an easy circuit or two of the exhibition before folding time.

With few exceptions, everything on display is domestic-oriented. If you’re looking for coin-op oldies but goodies, they’re still going strong behind the counter handling commercial account workloads.

The vintage collection grew as the operator scoured the region searching for vintage tubs and hoisting them up in no chronological order. When rack space ran out 10 years ago, so did the zest for adding pieces. His only regret: not having room to showcase a 1928 tunnel washer buried at a local hotel.

Wilson’s entrée into the industry — like the washing machine museum — was happenstance. Intrigued by the laundry biz, he got his feet wet in 1980 while keeping his day job as a hospital X-ray technician, but soon went all in with a partner building up a five-store chain and a burgeoning linen service route. After a buyout a decade later, he consolidated storefront and commercial laundry operations under one roof at the present Mineral Wells location.

As part of the merger, the self-service portion was relocated from one end to the other, with linen processing occupying the former coin-op. Wilson wasn’t fond of empty walls and proceeded to adorn the perimeter of the new 53-machine, 2,000-square-foot space with roadside memorabilia complemented by assorted scrub boards and other antique wash implements picked up while running sheets and towels.

The museum was an afterthought. Stumbling upon his first wooden washer at an estate sale, it was love at first crank. But not until he plunked down $250 and showed it off back at the store did Wilson know it was just the start.

“I didn’t realize I’d go this crazy,” he chuckles. “It sort of happened.”

That first piece — a century-old wash tub needing a push, pull, and stomp to agitate — features an optional power drive by tethering the washer to a vehicle’s axle with an innovative belt-and-pulley assembly “saving Mama lots and lots of work,” the owner smiles.

Wilson says he marvels not only at the mechanical artistry, but the great strides laundering took at the beginning of the last century, progressing from cutting wood to cutting-edge — all without the aid of computers.

Pointing to the circa 1910 Thor Electric — a wooden wash basket with built-in, alternating 30-second reverse tumbling — the operator is quick to point out that the techniques employed in modern coin laundry equipment had humble beginnings.

Looking for a glance back at the origins of washer-extractors? Head to the back of the store and admire a rare, twin copper tub gas-fed combo which offered clothes both a warm bath and spin-out.

The antique Maytag motorized washer used by the owner’s late grandmother is prominently displayed and holds sentimental value. But the one tub that really tickles Wilson’s fancy is a crank unit he’s got out back featuring a wooden rotary “dolly-style” agitator resembling udders and controlled by an oscillating, lid-mounted tongue-and-groove gear that spins “just as smooth as silk.”

The offbeat museum-in-a-coin-op is on the map in various travel guides, and has garnered press over the years in the Lone Star State.

Even though the hybrid continues to attract both patrons and curious alike, Wilson admits that, at age 72, he’s ready to retire and is entertaining offers on the business — lock, stock and barrel tub.

Sure, there’s a wash machine museum in Eaton, Colo., that’s bigger and more touchy-feely. But only here in the heart of Texas can visitors step back in time and walk out with a clean load.