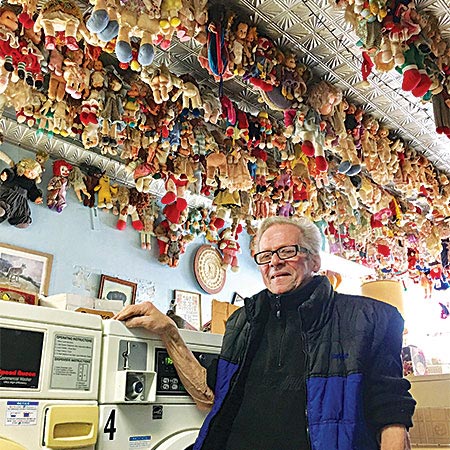 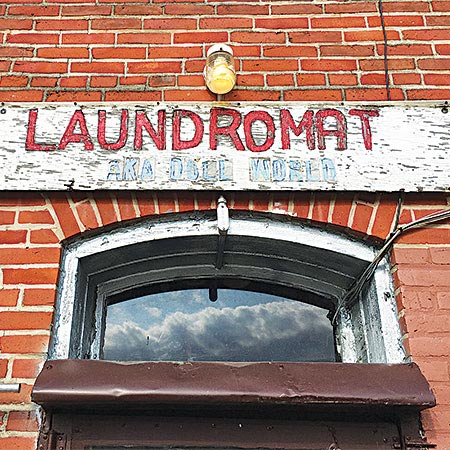 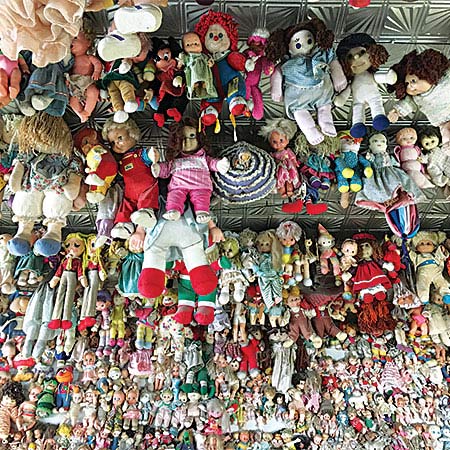 SPRING GROVE, Minn. — Lucky Volkenant and Fred Wilson have set the bar pretty high when it comes to over-the-top coin-op décor. Although separated by a thousand miles, the two operators are cut from the same cloth, both upstaging their rural, small-town laundries with novel attractions.

Nothing can prepare a visitor for the spectacle of nearly 3,000 dolls suspended in a coin laundry. They’re everywhere and I mean everywhere — rag dolls, hand-sewn dolls and plastic dolls — a sight made all the more surreal with no customers around. Just Raggedy Ann and Andy, Betsy Wetsy, Cabbage Patch kids, and a toy store full of their closest friends hangin’ around at LJ’s Laundromat aka Doll World in this southern Minnesota border hamlet.

Consider this: You could give away a pair to each of the town’s 1,330 residents and still have enough orphans to fill dozens of toy chests.

Part coin-op, part rummage sale, the brick storefront has hosted self-serve wash-and-dry trade for nearly half of its 135-year history and ragamuffin dolls for the past two decades.

When I ask the obvious, the operator throws it back my way.

“What’d you do with a 12-foot ceiling?” responds the bespectacled Volkenant, gesturing toward the tin backdrop behind rows of cherubic cheeks and puckered rosy-red lips. “I bought a bunch of dolls over the years and just started hanging them and progressed to over 2,700. It’s a good conversation piece and warms everything up.”

If the thought of all those eyes trained on you while loading skivvies into the Speed Queens is discomforting, just think how embarrassing it is to hang from a hook and have strangers peeking up your polka dot dress.

Images of the seemingly endless sea of thousands of dangling vinyl thighs have been splashed on media outlets in “The Land of 10,000 Lakes” and crossed the Pacific for inclusion in a Taiwanese photo exhibition.

LJ’s wall-to-wall lifeless moppets, a few with missing appendages or malfunctioning eyelids, nearly frightened off a photographer from Twin Cities CBS affiliate WCCO-TV during filming, a memorable incident the owner recalls with a chuckle.

Shipments from doll lovers desirous of having their huggable toys build up the collection arrive at LJ’s doorstep from time to time. The operator shows off the recent addition of a Bush 43 action figure, propped up on a shelf near the side door, and wonders out loud where to display the likeness of the former president and leader of the free world.

While the sheer size of the collection doesn’t tickle his Elmo, Volkenant gets his kicks when ladies drive into town and are awestruck by the display. Few doll enthusiasts making the pilgrimage have wash in mind; for most, it’s a sentimental walk down memory lane.

Pleas to bring down a favorite and give it a loving home are respectfully declined. The most sought-after is Mrs. Beasley, the constant companion of Buffy in the ’60s TV sitcom Family Affair.

“If they’re up there, that’s where they stay for now,” he says, noting that a separate collection of porcelain dolls are tagged for sale.

A former gas station owner, Volkenant and his wife Jean pulled up stakes 30 years ago from Waukegan, Ill., and moved west to this community best known as Minnesota’s first Norwegian settlement. For the first five years, he ran a profitable tavern but yearned to get out from behind the bar and away from dealing with alcohol-infused clientele.

A neglected laundry directly across Spring Grove’s thoroughfare was his ticket to freedom. The coin-op occupied half of a building that once housed a haberdashery and, later, the town’s post office.

Looking for a way to break the ice with patrons, the former barkeep figured the whimsical dolls would help liven up the joint and add color to the 17 monochromatic, small-capacity front loaders and 12 dryer pockets. Little by little, his pickings from estate sales were mounted using stiff wire and hooks without any attention to defects or wardrobe malfunctions. Each remains in place and receives a pass from a Shop-Vac every four to five years to blow off lint.

Volkenant’s operation is strictly “old school.” Customers can feel free to run errands; he’ll transfer their load to the dryer or even have everything folded when they get back. Breaking bills is done with a personal touch: “When they ask, ‘Where’s the change machine?,’ I say, ‘You’re looking at it,’” he quips, digging quarters out of his pocket.

As loads tumble away, customers are free to browse the bric-a-brac assembled in laundry aisles and adjacent second-hand shop where 8-track tapes, right- and left-handed baseball gloves, knives, and even an autographed photo of comedian Dana Carvey are priced to sell.

What laundry patrons and visitors won’t come face-to-face with anywhere in LJ’s are two banned dolls: Chucky from the Child’s Play horror film trilogy, along with his possessed partner Tiffany from the movie franchise that followed.

“I don’t have them. Kids and even adults hate them. They have a phobia, I guess,” Volkenant says. While the friendly My Buddy is welcomed with open arms, there’s no such standing invitation for the sinister pair to hang out at this coin-op.

In Tuesday’s conclusion: Vintage wash tubs sure can crank it out