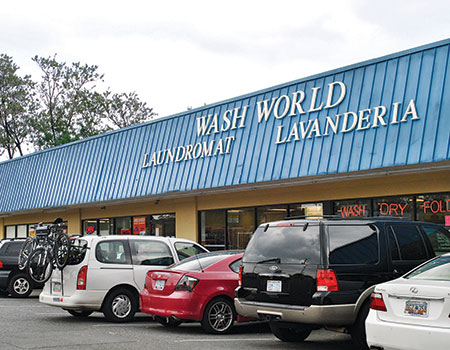 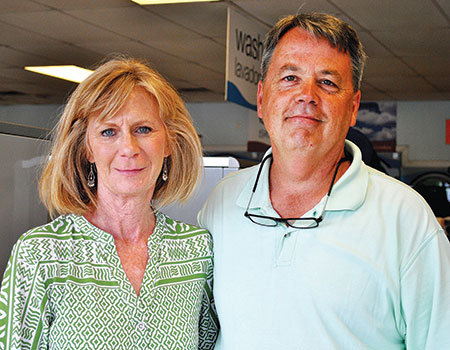 The people include laundry manager Gabriela (Gaby) Gonzalez, originally from Peru. Some 70% of Wash World’s customers are Hispanic, Monroe estimates, and Gonzalez communicates extremely well with them. “She’s very resourceful. She puts out any fire that comes up,” he says.

Holly, Monroe’s wife and laundry partner throughout most of his 38-year career, is another of those people making the long-distance Charlotte operation possible.

She was with him as he was interviewed recently, and when he can’t make the weekly commute, she or one of their three sons, who have joined the business as they’ve grown up, will make it for him.

Barry Monroe and the sons—Joe, Ryan and Daniel Monroe—often use the commute as an opportunity to fix things.

Barry had his head in a washer the day he was interviewed, checking where a nail had gone through a hole in the tub and torn up the rubber beneath.

He recognized the problem immediately; construction workers often use the machines and never know a nail has slipped from a pocket, he says.

A replacement part was on hand. “Can you believe that? We were prepared!” he says. “We were ready.”

The technology that the Monroes depend on to keep them abreast of what’s happening in the Charlotte wash, their only North Carolina location, is a CCI (Card Concepts Inc.) automated wash card dispenser.

The computerized machine does a host of other things besides dispensing cards that customers use to run the 44 washers and 44 dryers, all Electrolux brand.

The CCI system is linked electronically to each machine, and “I can remotely access what’s going on,” Barry Monroe says. He can check revenues for the day, the hour, even the year. He can add value to a card, do time-of-day pricing, reboot computers, and see which machines are running.

“It’s exciting when you dial in on a Sunday and they’re all booked,” he says.

Gonzalez, with a different access card, can use the system to shut down a machine that’s having mechanical problems. That eliminates customer complaints created when they put money in a machine that isn’t working, Monroe says.

Gonzalez can also use it to consolidate credit remaining on a customer’s wash cards. “She’s better than that machine, but that machine’s wonderful, too,” Holly Monroe says of the manager.

Hannah Miller is a freelance writer based in Charlotte, N.C.