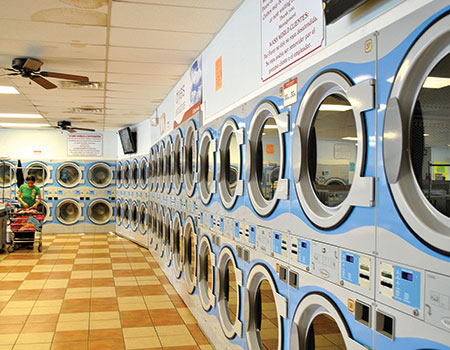 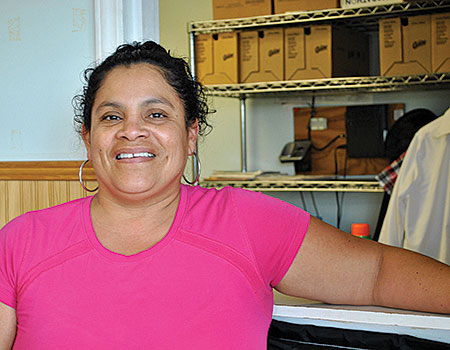 The people include laundry manager Gabriela (Gaby) Gonzalez, originally from Peru. Some 70% of Wash World’s customers are Hispanic, Monroe estimates, and Gonzalez communicates extremely well with them. “She’s very resourceful. She puts out any fire that comes up,” he says.

Holly, Monroe’s wife and laundry partner throughout most of his 38-year career, is another of those people making the long-distance Charlotte operation possible.

The Monroes own the small strip shopping center where the 3,600-square-foot laundry is located. A Hispanic meat market/grocery leases space on one side, and a Hispanic restaurant on the other.

Within the Laundromat, an 80-square-foot section has been carved out at the front and leased to a business that offers phone cards and wire transfers of money to places like Mexico, Guatemala and Peru.

Charlotte’s Wash World is the only one of Monroe’s laundries to be located in an area with a lot of Hispanic customers. Barry has six other Wash Worlds in the Columbia area, but customers come from a mix of backgrounds, with a big military installation and several colleges nearby.

In Charlotte, he makes sure that familiar Hispanic soft drinks—coconut juice and mango- and guava-based drinks—are in the vending machine. He’s a fan himself: “They’re delicious.”

He stocks Hispanic brands of fabric softener (Sauvitel) and soap (Ariel). He would stock a Hispanic brand of bleach, but most of the customers recognize Clorox, he says.

The Laundromat and nearby businesses share customers, he says. “I think we all complement each other.”

But Holly thinks the laundry would do well, even without the adjoining businesses.

Barry is a big believer in the benefits of the right location, and Wash World is on a major street, Charlotte’s Central Avenue.

“A traffic light location and a major intersection. It doesn’t get any better,” he says. The shopping center parking lot exits onto two streets, and there are about 60 parking spaces.

The Monroes believe in keeping the laundry clean “and the machines working,” says Holly.

And they also believe in “bigger is better,” Barry says. Four of the six Wash Worlds in Columbia are, like the Charlotte location, a superstore.

When you’re deciding where to take your load of laundry, he says, do you want to take it to the store with 18 washers? “It might be full.”

No, he says, you go where there are 44 washers, and while you’re there, “You go next door and get a nice meal.”

He used to concentrate on supplying coin-ops, but with the entry of his sons into the business, he has branched out into sales to hotels, motels, apartment complexes, jails, prisons, even high school athletic programs.

The family’s business, both coin-op ownership and distribution, is changing in other ways, too. The sons—Joe, Ryan and Daniel Monroe—bring an interest in marketing through social media, Barry says, and a specialist in that area is being hired.

When Wash World opened four years ago, Barry teamed with the Hispanic restaurant next door, then a pizza shop, in a live radio promotion. “He would do some type of free pizza, and we would give out a free-wash card.”

He still believes in rewards. The panel on the front of the card dispenser tells customers when they’ve earned enough cumulative points for a free wash. Called Wash to Win, it visually shows their purchases approaching the $120 mark.

When that happens, says Barry, images of fireworks start exploding. “It goes off like a 4th of July celebration – You Won a $3 Wash!”

Other bonuses can be programmed into the computer. For instance, customers who register their cards are awarded $5 worth of washing and drying within seven days of their birthday.

“It helps build that customer loyalty,” Barry says. “All those little things add up.”

Hannah Miller is a freelance writer based in Charlotte, N.C.