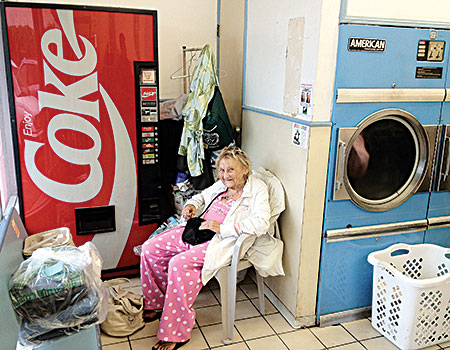 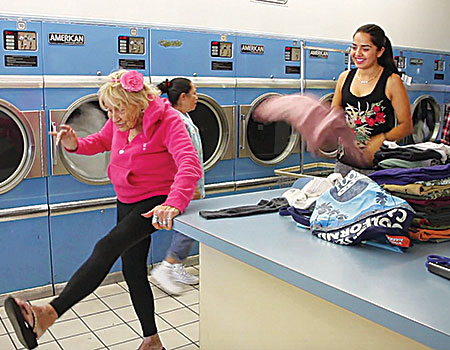 Prefers unpretentious nature of laundry to Hollywood glitz and glamour

SANTA MONICA, Calif. — It’s fitting that my interview here with the Queen of Montana Avenue at the Fox Laundry coincides with a strong storm. That’s how this story unfolded some 20 years ago.

On that fateful cold and rainy night, Stan Fox got a call from his attendant at closing time seeking permission for the elderly homeless woman, who had been hanging about for months during operating hours, to spend the night indoors rather than brave the elements.

With Fox’s blessing, that night turned into weeks, months, years and, eventually, nearly two decades of Marie “Mimi” Haist living out of the Fox Laundry tucked away in a plaza along the Montana Avenue commercial strip.

There, she nested among the 52 machines and got buddy-buddy with neighborhood residents, including Hollywood actor Zach Galifianakis.

By day, Mimi would fold clothes and sweep. At night, she’d don a jacket and sleep. Two plastic chairs — one to sit on and the other to support her legs — were dragged to the second washer aisle where she dozed off away from peering eyes.

Eventually, Fox turned over a front-door key, giving her free rein to do what she liked best at night — getting dolled up in all things pink and enjoying some lemon drop martinis while gallivanting around town with acquaintances from the laundry.

Among them was Yaniv Rokah, a neighborhood coffee barista who made the octogenarian the subject of a 77-minute documentary titled Queen Mimi (available through iTunes and Netflix). The film turned its leading lady into a media darling and brought the spotlight to Fox Laundry’s supporting role within the social fabric of Santa Monica.

The documentary celebrates the life and turn of events of the now-91-year-old who lost it all and discovers that her coin-op home is where the heart is. You’ll chuckle, shed a tear or two, and shake your head watching her go from the laundry’s tile floor to not only the red carpet premiere of Galifianakis’ sequel The Hangover 3, but her own film — all while getting a candid look at what makes her tick and what ticks her off.

LIFE OF THE PARTY

While Queen Mimi puts a human face on homelessness, it also offers a rare glimpse into coin-op camaraderie, with playful banter between its star and Fox staff as they dance in the aisle and, at times, set the mood with some provocative dress.

“Mimi’s the life of the party. She would get upset if we were having a party outside the laundry and she wasn’t invited,” employee Alesandrea Araujo shares while dismissing any notion that fame has gone to Mimi’s head. “The documentary hasn’t changed her one bit.”

That sentiment is echoed by the Queen herself as she waits out the inclement weather in her apartment so she can safely maneuver her cart-cum-walker and journey to the coin-op.

“I’m not one of those people with my nose in the air. I try to blend in,” Mimi remarks, saying she prefers the unpretentious nature of the laundry to the glitz and glamour of Hollywood.

Although she admits to finally hanging up her fluff ’n fold processing, which for years was offered to select patrons, the spry woman still shows up eight hours each day to back up staff.

Asked about her regiment of bending over to clear tumbler lint, captured on film and eliciting cheeky comments from the store owner and friends, Mimi insists she “still checks the dryers all the time, as nobody knows how to clean them right.” She is quick to show off a treasured heart-shaped Tiffany ring collected from one of the bins.

“She feels like she’s on top of the world. She’s more proud and is noticed by all now,” Rokah says. “Before people used to judge her: ‘Who is that crazy woman on the bench?’ Now they recognize her as Queen Mimi. Her spirit is higher than it was before. I love that about her.”

Employee Sonia Ramos tells me she finds comfort when the Queen visits: “She’s very special. When you need a hug, she’s there.”

The comment underscores Mimi’s role as a mother figure, a thread that ties together the close-knit community, and a theme Rokah masterfully brings full-circle when there’s revelation of an estranged daughter. He goes off script, persuades the daughter to participate, and eventually employs his work of art to reunite the pair.

“All of a sudden, there was no family,” Mimi’s eldest daughter, Kate, tells Rokah of her mother’s departure. “We wondered if she was even alive.”

In a particularly touching moment, Kate recalls a song verse penned by her younger sibling Elizabeth, who died while her mother was on the streets: Where are you tonight? Are you warm? Are you safe? Are you dry?

The filmmaker hopes viewers will have more compassion for society’s down-and-out.

“Every homeless person that we’re so afraid of — guess what, at some point in their life, they were just like us, and came from a family and some social environment,” Rokah says. “There’s a million other Mimis out there.”

“One of the first things my father taught me was not to judge anyone by their appearance and treat everyone with respect,” Fox says.

And while he wasn’t advocating others to follow his lead and allow someone to seek refuge in their laundry, the veteran operator did note his fellow store owners have probably never met someone like Mimi.

“She doesn’t fit the mold of a homeless person,” he says. “She’s got such a zest for life.”

The documentary, which had a private screening for the local community in 2015 and premiered last spring, has spawned a “quaint curiosity” for the coin-op, according to Fox.

He expresses concern as Mimi becomes more “fragile,” but reports she remains resilient and that the Queen “comes in every day and holds court.” His offer to pick up the tab for much-needed cataract eye surgery was turned down by the proud woman.

The owner with a big heart admits that, at some point, there will be heartache.

“I’m sure the laundry would lose a lot of its aura without her. I don’t look forward to that day.”