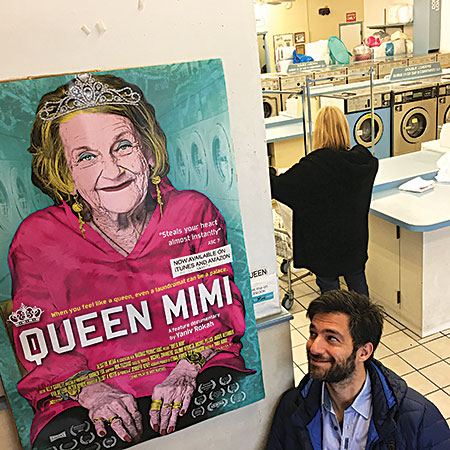 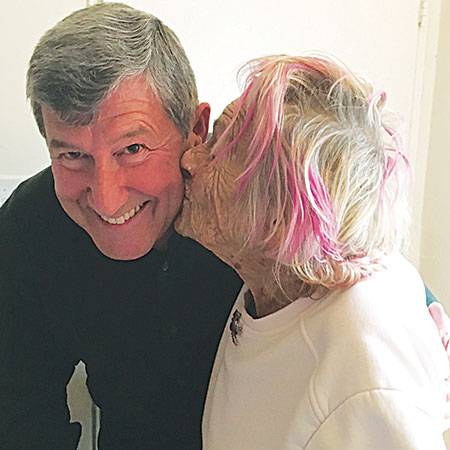 SANTA MONICA, Calif. — It’s fitting that my interview here with the Queen of Montana Avenue at the Fox Laundry coincides with a strong storm. That’s how this story unfolded some 20 years ago.

On that fateful cold and rainy night, Stan Fox got a call from his attendant at closing time seeking permission for the elderly homeless woman, who had been hanging about for months during operating hours, to spend the night indoors rather than brave the elements.

“I didn’t even think about it. I just said, ‘Absolutely, let her stay,’” recalls the veteran operator. “Little did I know this was going to turn into a long-term relationship.”

With his blessing, that night turned into weeks, months, years and, eventually, nearly two decades of Marie “Mimi” Haist living out of the Fox Laundry tucked away in a plaza along the Montana Avenue commercial strip.

There, she nested among the 52 machines and got buddy-buddy with neighborhood residents, including Hollywood actor Zach Galifianakis.

By day, Mimi would fold clothes and sweep. At night, she’d don a jacket and sleep. Two plastic chairs — one to sit on and the other to support her legs — were dragged to the second washer aisle where she dozed off away from peering eyes.

Eventually, Fox turned over a front-door key, giving her free rein to do what she liked best at night — getting dolled up in all things pink and enjoying some lemon drop martinis while gallivanting around town with acquaintances from the laundry.

Among them was Yaniv Rokah, a neighborhood coffee barista who made the octogenarian the subject of a 77-minute documentary titled Queen Mimi (available through iTunes and Netflix). The film turned its leading lady into a media darling and brought the spotlight to Fox Laundry’s supporting role within the social fabric of Santa Monica.

“Who lives in a Laundromat? What a cool story! I thought I could make a short film out of that,” Rokah says as we sit in the same front corner where the Queen accumulated her possessions and piled fluff ’n fold orders awaiting pickup from her loyal following.

“You have a combination of a woman in her 80s, extremely sharp and funny and sexual and all by herself living in a laundry. I figured there’s a story there.”

The documentary celebrates the life and turn of events of the now-91-year-old who lost it all and discovers that her coin-op home is where the heart is. You’ll chuckle, shed a tear or two, and shake your head watching her go from the laundry’s tile floor to not only the red carpet premiere of Galifianakis’ sequel The Hangover 3, but her own film — all while getting a candid look at what makes her tick and what ticks her off.

To appreciate how a woman living on the street rose to prominence as the Queen of Montana Avenue is to understand Fox Laundry as the great equalizer in a diverse community.

North of Montana Avenue are multi-million dollar residences. To its south, a mature stock of walk-up apartment buildings. The store is an anomaly in this chic business district yet stands the test of time, having survived escalating rents and the ’94 Northridge Earthquake — which claimed a neighboring coin-op — and remaining a laundering hub for the haves and the have-nots.

And while the earthquake shook out a competitor, Fox couldn’t shake off a “huge” homeless problem that he and others in this seaside community still grapple with today.

By the time the temblor hit, Mimi had already been showing up daily at the then-partially-attended laundry for a year, arriving by bus and remaining from opening to closing to help patrons load machines, pick up after them, and chase out vagrants.

“She hated homeless people and she was herself homeless,” Fox relates. “Mimi made herself very useful and kept an eye on things and was very protective of everything. She endeared herself to us.”

Things weren’t always rosy. There were times Fox, a multi-store operator with four decades now under his belt, admits that having someone camp out in his business was more a liability than an asset.

“I’ve had plenty of fights with Mimi over the years. She’s mellowed out a whole lot now, but when she was younger and feistier, she would throw people out in not a nice way. She could be very, very nasty. A lot of customers would say, ‘I only come here for Mimi,’ while others said, ‘I’ll never come back.’”

Fast forward to 2010 and the Israeli-born Rokah, who was pouring latte art in a coffee shop directly across Montana awaiting his Hollywood break. He bonded with the Fox Laundry fixture and got a go-ahead to document her life over a five-year span.

“I never thought she would open up,” the first-time filmmaker admits. “I was very respectful. I didn’t want to dig deep into her past yet I was very curious for myself. How can a woman in her 80s end up all by herself? Could that happen to all of us? Yes, it can.”

Rokah says capturing Mimi’s bubbly personality couldn’t be scripted: “I was going with the flow and seeing where it took me.”

Much of the storyline is carried by those who know Mimi best — Fox, his staff, patrons and neighboring shopkeepers — all recounting how she touched their lives.

Most notable was comedian Galifianakis, who, before he hit the big time, resided in a modest unit a few doors away from the laundry and grew close to Mimi. The two hit red-carpet events, laid in bed for a VH1 cable show, and agreed on housesitting arrangements. “We talk about sex and we laugh a lot,” he relates in one of the film’s segments.

While others would also occasionally put Mimi up for the night, the story takes a dramatic turn when Galifianakis quietly arranges to get her an apartment steps from the laundry, and fellow Hollywood star Renée Zellweger furnishes it. Rokah and his crew captured the glee when Mimi transitioned from dozing among quarter-operated washers to new sleeping quarters.

Fox was elated for her and says the celebrities were “thoughtful to provide her a dwelling within close walking distance.”

Thursday’s conclusion: Putting a human face on homelessness, and an update on what “Queen Mimi” is doing now