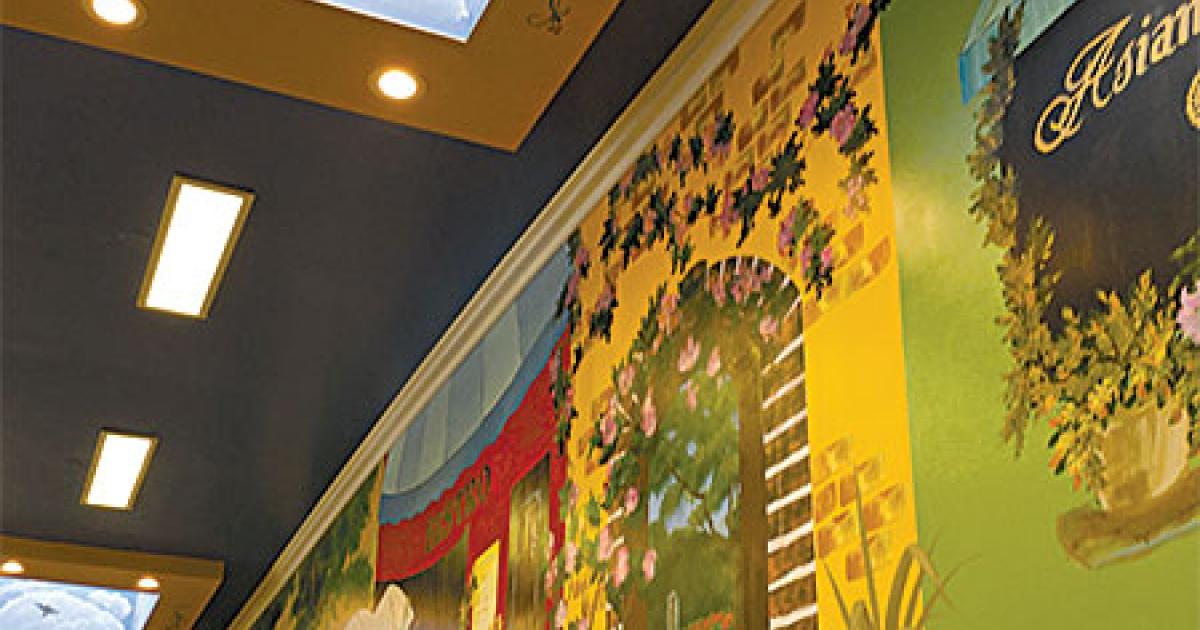 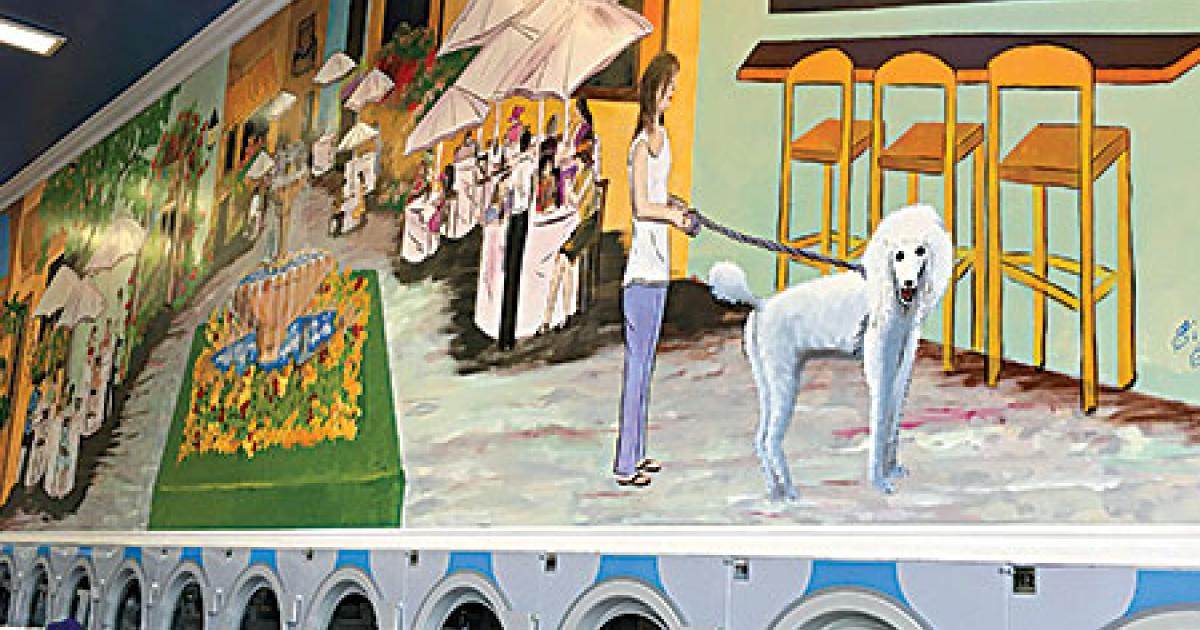 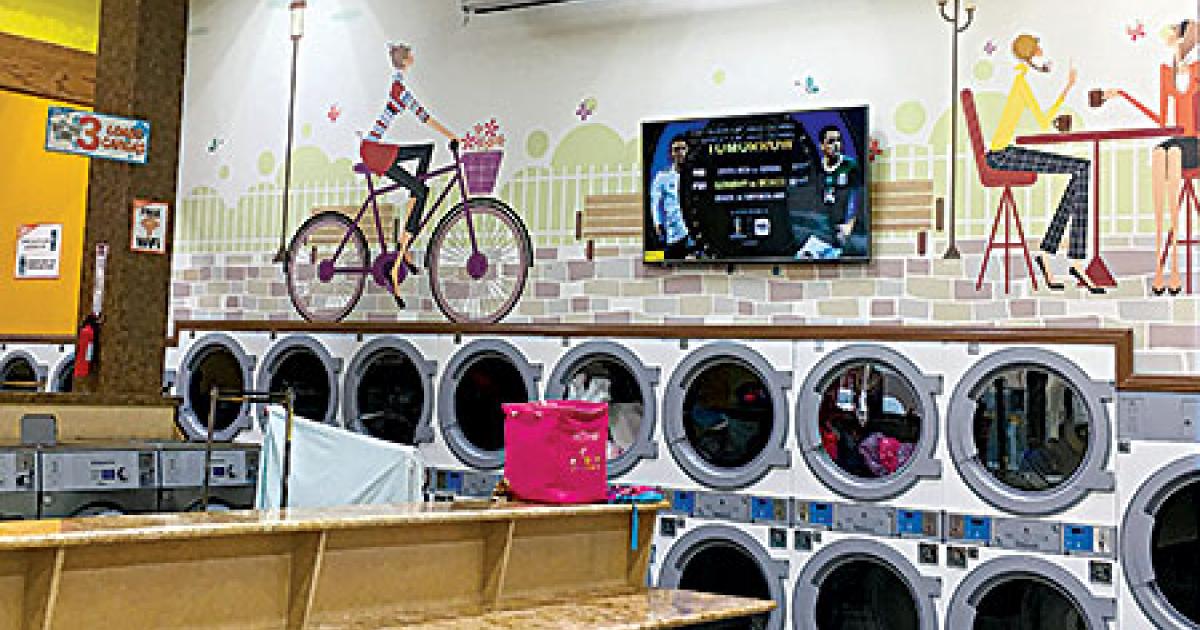 LOS ANGELES — Chances are you wouldn’t spend the bulk of your waking hours in Southern California visiting laundries. But if you’re “Goin’ with Cohen,” you bypass the beaches and skip the Hollywood Walk of Fame. The GPS is set for strip centers, not the Sunset Strip.

Seeking out coin-op hidden gems tucked away in the sun-drenched coastal counties of Los Angeles, Orange and San Diego is quite daunting. After all, we’re talking about a store roster that hits four digits spread across the nation’s second most populous metro area and its sprawling rival just north of the Mexican border.

Zig-zagging from Burbank to Buena Park, from Claremont to Chula Vista, I crossed the threshold of 169 stores during a one-week span. Number 170 — named No Poop Stains — was thrown out for being strictly drop-off.

Coin-ops here mirror much of the country. The washers are still washers and the dryers are still dryers. But what sets many apart is their SoCal style, where walls rule and customers chill.

My last extended visit to Los Angeles was in 1994 to chronicle the rebirth of a coin laundry burned to the ground during the ’92 riots. Back then, L.A.’s inner-city neighborhoods were reeling. Today, they’re positively humming.

South Central and Koreatown — two areas that bore the brunt of the civil unrest — underwent a renaissance and now spoil residents with an impressive lineup of mega stores that sets a new high bar when it comes to enhancing the customer experience.

In Orange County, where the urban fabric stretches out on a grid toward mountain canyons, coin laundry appears to be in a tug of war between old school and new school. Top loaders continue to attract quarters at well-maintained unattended stores, which vie for trade just down the street from front loader-dominated laundries outfitted with all the bells and whistles.

Across San Diego and points south, self-service laundries are responding to an ever-changing landscape by pumping water — and money — into gentrified neighborhoods and bustling corridors just north of the U.S.-Mexico border.

One can’t spend time in Southern California without giving thought to the wall. No, not the border wall—the laundry wall. SoCal’s coin-op scene is awash with murals. The displays are dazzling, with many meticulously hand-painted while others employ custom-printed wallpaper as the medium.

Jazzed-up perimeters do more than add warmth and provide a visual escape from the monotony of folding baby clothes. The art appears to have a calming effect on the already laid-back clientele.

When it comes to treating customers with wall treatments, there’s plenty of one-upmanship. Just when you think you’ve seen a jaw-dropper, another stops you in your tracks.

In Buena Park, one store’s perimeter is lined with three-dimensional cutouts depicting a nighttime urban landscape of mid-rise buildings. At the competition a stone’s throw away, every bit of wall is painted up with a tribute to the marvel of transportation, taking one from the horse-drawn stagecoach to the iron horse Southern Pacific Railroad locomotive and, finally, to the horsepower of aviation.

An elephant mural takes center stage at a kids’ corner in San Diego while a floor-to-ceiling undersea adventure awaits tots in Anaheim.

The off-the-wall laundry décor scheme is played up around The City of Angels as well, filling the void above dryer banks with dinosaurs in Inglewood, café life in Koreatown and a pastoral landscape in South Los Angeles.

Saturday morning brings both hawkers selling jeans and those needing to wash them out to the streets of Central L.A.’s Vermont Avenue corridor, home to arguably one of the region’s greatest concentrations of self-service laundry. If you want to play ball here, you better put your money where your mouth is and plant the biggest iron on the biggest floor. Capacity along this stretch is gauged not in poundage, but in tonnage.

Just off Vermont is the 8th Street Lavanderia, where pulling into the lot is met with a cart and a smile. Ferrying loads car door-to-machine door was a creature comfort operator Jetsada Wee introduced more than a year ago as part of his quest “to provide the community with a good, clean and safe place for everyone to do their laundry.”

While the valet service treats patrons on the outside, the experience doesn’t end once indoors. Here, amid the beehive of activity on the floor, is a faux bistro serving diners as they relax amid a flowing fountain and blooming flowers — a wee taste of “Paree” captured in a hand-painted mural atop 8th Street’s stack dryers. The artisan’s work, which the owner inherited from the store developer, is capped by decoratively framed skylights softly bathing the finishing area with morning sun.

Customers leisurely go about hanging shirts and matching up socks as they chill out next to the hot tumblers. Just like the caricatures above, nobody below seems in a rush to bag up their clothes and head home.

The stunning artwork gets a thumbs-up from one regular who tells me she gravitates to the south end of the extended tabletop to fold in close proximity to her favorite white standard poodle.

Over at Caffé Laundry 24, an 8,400-square-foot goliath offering 96 washers and 112 dryer pockets just north of Koreatown’s Wilshire and Vermont crossroads, owner Jay Min’s staff keeps a watchful eye out for new arrivals with an army of carts and curbside-assisted unloading. Once whisked inside, patrons are welcomed with a rich, earth-tone scheme punctuated with custom wallpaper treatments extending from the tumbler banks to the tall deck.

“I like to give customers a comfortable, sophisticated atmosphere and make them feel well-served at a nice place,” Min says of the venue made all the more inviting with expansive storefront windows drenching the aisles with sunlight.

Min enlisted the help of his nephew to coordinate the process of converting high-resolution art prints to wallpaper, crafting them overseas in Korea, and then having them professionally installed by local contractor Eric Sunwoo.

The wall treatments, which portray leisure-time activities like sharing coffee and bicycling, adorn wide swaths of the L-shaped store and carried a $6,000 price tag, according to the owner.