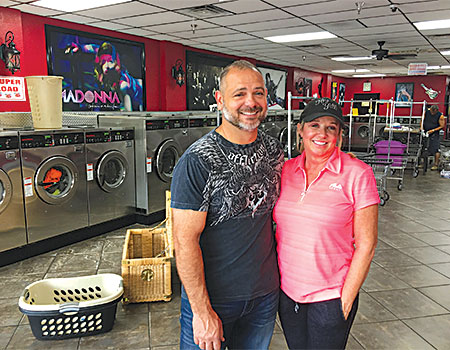 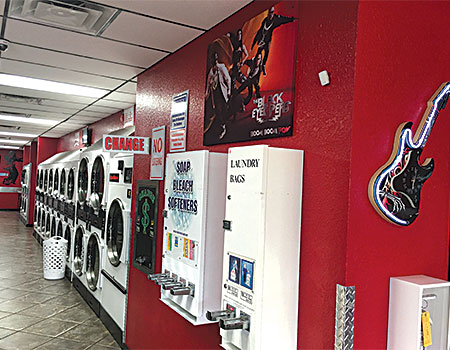 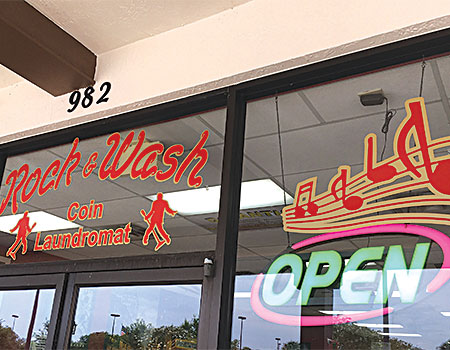 CHICAGO — Move over Hard Rock Cafe, watch out Johnny Rockets. There’s a freshly laundered spin on music and retro-themed décor. At Florida’s Rock & Wash and Connecticut’s Sock Hop chains, it’s a wash and dry rather than a burger and fries being served up in era-inspired environments.

“We decided to make something cool and nice and friendly for people to come in and check out, not your average run-of-the-mill, old, depressing Laundromat,” explains Missy DeSantis inside the largest of a trio of stores where she and her husband Frank harmoniously blend recording star legends with the sound of tumbling clothes.

“Music puts everyone in a good mood,” she tells me to a backdrop of patrons lured to the washer pyramid by a poster-sized Madonna striking a seductive pose.

If you’re looking to fold to a beat, better get your earbuds out as the only drums you’ll find here churn away inside the machines. But it’s the laundry’s ornamentation where they really pump up the volume.

Rock & Wash II Coin Laundromat in Belleview, Fla., debuted eight years ago and within months of launching a similarly themed store just to the south in The Villages. In both instances, landlords courted the couple to turn around derelict laundries and help drive traffic into their shopping plazas with a modern facility and a show-stopping motif.

They did more than put a new dress on the ol’ girl. Pulling residents from sprawling mobile home parks and well-manicured gated complexes meant delivering a three-part harmony of state-of-the-art equipment, cleanliness and eye-catching scenery.

Mechanical contractors by trade, the husband-and-wife team got their feet wet in wash-and-dry over a decade ago with the buildout of Wash Saloon, a music-themed laundry where coin-op met country western. The mix of whirling machines, a lively jukebox and the giddy-up atmosphere stood out in Wildwood, a city at the crossroads of Interstate 75 and Florida’s Turnpike. The novel store’s success was noticed in local real estate circles and the entrepreneurs were soon approached to work their magic revitalizing a couple of aging coin-ops that had fallen on hard times.

Replicating the country-inspired getup wasn’t going to play to the crowd in The Villages, where active retirees and winter snowbirds are more likely to motor around in golf carts than kick up their heels. Music genres from the 1950s and ’60s fit the bill and Rock & Wash was born.

“That one took off even better than Wildwood,” Missy says of the 1,500-square-foot project housed in a grocery-anchored plaza along a north-south arterial near the crossroads of The Villages and neighboring Lady Lake.

At Rock & Wash I, the iron is on the floor and Elvis is in the house. A stairstep of two top-load and seven front-load washers leading to 10 multi-load tumbler pockets is mirrored along the demising walls of the 24-foot-wide store.

Stage left is a colorful mural capturing Elvis Presley greeting a theater crowd at one of his movie premieres. Tribute to the King of Rock ’n’ Roll is paid with a plaque and portrait at the top loaders, as well as photos near the soap vendor where the gallery also includes The Rat Pack striking a classic pose in Vegas.

Even before the first wash was loaded at Rock & Wash I, an offer for another store makeover in Belleview, a half-hour’s drive to the north, was presented. The laundry’s condition was “horrific,” according to Frank, who recounts over two dozen broken machines on the floor.

A top-to-bottom rebuild was undertaken while juggling the couple’s existing contracting and laundry enterprises. Frank celebrated New Year’s Eve by laying tile to meet the scheduled opening date. Over the course of 90 days — and 10 months after launching the first rock-themed coin-op — the stage was set for an encore.

With its spacious 2,000-square-foot endcap and in consultation with equipment representative Rusty Parks, Rock & Wash II’s 24-washer/25-dryer mix was tweaked to add an 80-pound front loader and 75-pound tumbler.

The coin-op also hosts a more contemporary lineup of music legends showcased in posters and Rolling Stone magazine covers — a reflection of the location’s washday crowd who turn up to soak their clothes and soak in the upbeat atmosphere.

Like its predecessor, the rock-themed laundry doesn’t play tunes, but does bring customers face-to-face with some of music’s top names. Madonna and Bruce Springsteen are among the headliners, backed by The Black Eyed Peas, The Beatles, Michael Jackson, Kiss, AC/DC and Lady Gaga.

Unlike the original Wash Saloon, which itself was later rebranded as Rock & Wash III, jukeboxes never boomed at later iterations. While favored by the owners, conflicts arising from individual tastes and TV monitors led to tuning out paid music. Missy says the popularity of smartphones and personal audio devices satisfies customers even if it doesn’t add to the ambiance.

Paying homage to rock legends carried an approximate $5,000 price tag per store, Missy acknowledges, noting that she spent hours online bargain-hunting. Her husband chimes in, adding that the decorations translate into a memorable customer experience: “It’s clean, it’s nice, and they can just relax.”

Missy nods in agreement. “It brings everyone back to an era that they love. We have people who never want to leave. They literally take off their shoes and think they’re at home.”

In Thursday’s conclusion: Kick off your Keds at the Sock Hop​