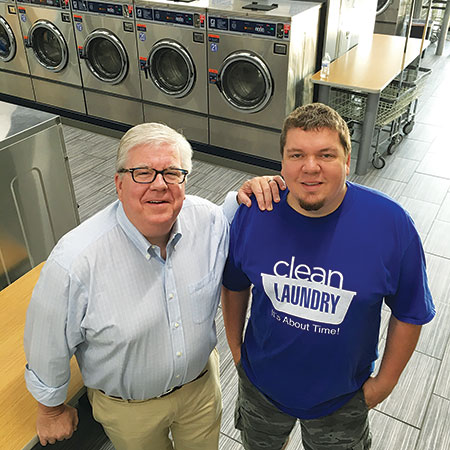 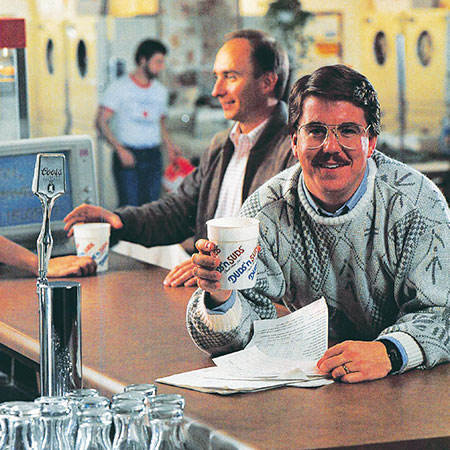 Catching up with entrepreneur Phil Akin

WATERLOO, Iowa — When word reached me that Phil Akin was back in laundry, I had to see what the one-time boy wonder of the industry was up to.

After a 20-year hiatus, the originator of the iconic Duds ’n Suds theme laundry franchise has once again set his sights on reshaping the self-service landscape with a new concept. This go-around, he’s concentrating on design and strategic planning, leaving the heavy lifting to his son, Ethan, who has joined his dad as a fourth-generation operator.

While the game plan has changed, Akin’s core principles of cleanliness and customer service remain as they were when the frat boy-turned-entrepreneur opened the door in 1983 to the first of 121 Duds ’n Suds company-owned and franchised outlets that eventually extended to 30 states, Canada and overseas.

The “Good Clean Fun” formula—where singles mingled, sipped beer, played pool, and walked out with freshly laundered clothes—attracted a new breed of customer and store owner who embraced a business model where never-before-seen creature comforts were interspersed among traditional rows of washers and dryers.

The unorthodox approach garnered publicity for the young innovator and, more importantly, gave a shot in the arm to a stigmatized self-service laundry industry that was trying to shake an unwarranted reputation as a seedy magnet for undesirables.

Akin’s ride to the top became a roller coaster that eventually derailed. Loss of controlling interest in his company, a turbulent Wall Street, and changing market dynamics led to an early exit in 1993. Half of the Duds ’n Suds locations still thrive under the trade name today, while other are shadows of their former glory.

Clean Laundry, which the Akin family debuted on Waterloo, Iowa’s, south side in 2014 and replicated across town late last year, isn’t a nostalgic ’80s rerun: You can’t belly up to the snack bar, and you won’t find any pool cues or cushy sofas. Gone is Duds ’n Suds’ archaic mix of small-capacity washers and dryers, replaced by front loaders boasting 200G extract and multi-load tumblers to maximize throughput.

“This is the anti-Duds ’n Suds. It’s the concept of delivering an immaculately clean store but that’s where it ends,” Akin points out. “Today, everything is time, time, time. We’re positioning ourselves as in and out in an hour or less. We’re not going to fill it up with stuff.”

Clean Laundry is by no means bare bones nor cookie cutter. The high, exposed deck and wide aisles add spaciousness to the 2,800- and 2,600-square-foot layouts. Natural light is augmented by overhead LED lighting strips fed by Cat 5 cable, the perfect complement to the chrome loading doors on 34 stainless steel washers and matching dryer pockets.

Check back Thursday for Part 2, when we take a deeper look at Clean Laundry