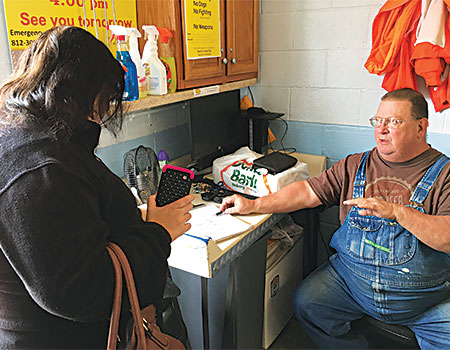 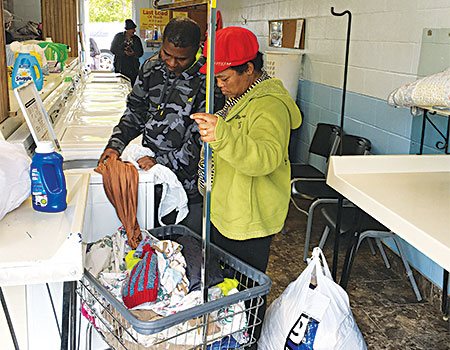 EVANSVILLE, Ind. — Forget about the “wash here, dry free” format. The same goes for grand openings where they give it all away for a week. You might as well throw in the so-called deep-discount charity coin-ops to boot. Here on Columbia Street, it’s the real deal: free wash, free dry, all the time.

If you thought not charging for loads would turn this self-proclaimed “Free For All” laundry into a chaotic free-for-all, don’t fret. Manager Don Clark has that all under control.

Just check in at his makeshift reception and sit tight until he waves you over to an assigned washer and dryer to load and reload until the job’s done without ever opening your wallet. Like the sign posted inside reads: “No Cash. No Coins. Leave your Money at Home.”

Can’t afford soap and bleach? Just pour what you need from the complimentary stock atop the bulkhead.

Welcome to the Jack Henry Gates Memorial Community Laundromat, where everything on offer is on the house — no questions asked.

Offering assistance to the less fortunate defines the family legacy and patriarch Jack Henry Gates, a well-known Evansville pallet manufacturer who died in 2014. Naming the laundry after his father was a fitting tribute to a man who was always there to lend a helping hand to “those down on their luck,” his son, Dennis Gates, says.

As the project was taking shape, Gates reached out to let his intentions be known to Lonnie Pace, whose 24-washer, 28-dryer Family Laundry operates around the corner.

“That was very important because we didn’t want to take customers. If the shoe was on the other foot, I would be concerned — ‘What in the world does this guy think he’s doing?’ — so we wanted to make sure that we weren’t taking customers,” he emphasizes.

“I’m sure a few of them slip through because we’re very open. If they say they need help, we’ll help them. I think, for the most part, these people probably are ones that might have a job, but one got laid off, or they’re spending all their money on everything and they can take their laundry money — $20 to $25 a week — and do something else with it — gas, food or whatever, it’s a small amount.”

To keep the focus on the truly needy, the new owner initially adapted the machines to token operation and enlisted the support of local churches to inform the community and hand out tokens off-site.

“This is only for people who can’t afford to go to (pay coin-ops). So we immediately said, ‘Let’s not make it money,’” Gates explained of the cashless format. “It would really minimize taking customers from them because they would have to have tokens.”

Within weeks, the response exceeded Gates’ expectations, and token distribution was moved on-site.

The philanthropist stresses that his project was never designed to compete with a traditional coin-op.

“That’s the real Laundromat there,” he says with a nod toward Family Laundry to the east. “Ours is small and tight. I think this facility would be hard to make a profit on, but it’s an ideal situation for these folks.”

Word spread through churches, food pantries, shelters and local caseworkers, culminating in 60,000 loads being run during the first 12 months of operation. Well into its second year, 1,000 patrons on average walk through the doors monthly without shelling out a single coin, Gates reports.

In Tuesday’s conclusion: Competing with a laundry charity