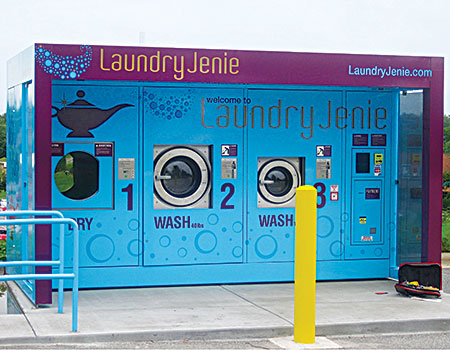 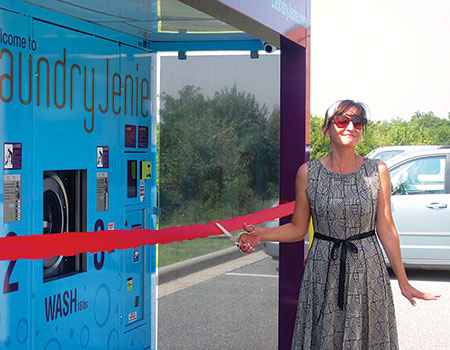 WALLBURG, N.C. — Self-service laundry operators in search of providing a more accessible laundry experience for their customers will soon have their wishes granted—the vended laundry kiosk, Laundry Jenie, has made its U.S. debut.

The vended laundry kiosk is “ideal” for washing regular loads, as well as for heavier loads, like duvets, curtains and pillows, according to the company.

Though the offering is new in the U.S., the laundry kiosk is already well established in the European market, where the concept of Laundry Jenie originated.

KIS USA, a division of Photo-Me International, has installed more than 400 similar “launderette units” across continental Europe, according to the company.

Lautzenheiser’s first encounter with the laundry kiosk was during a trip to France, where she saw a similar unit at a grocery store parking lot.

Though she says she initially found the concept novel, she realized the value that the laundry kiosk provides in the eyes of the customer.

“I contacted the manufacturer and asked them for more information on what the unit is, and the cost, and if they had considered bringing them to the United States,” says Lautzenheiser. “And, if they hadn’t, I would like to purchase one and brand them here in the United States and start the trend here.”

Understanding the trends of the laundry industry is nothing new for Lautzenheiser, whose mother owned a self-service laundry business for many years.

“She opened it up 24 years ago, and when she passed away, I inherited her coin laundry. So, I had a few years of experience as owner of a coin Laundromat,” says Lautzenheiser.

The experience gave her insight into the laundry business’ financial responsibilities. So, when her landlord told her that he wanted to move into her Laundromat’s space, this insight proved valuable.

“I was investigating moving, but the cost of moving, even with existing equipment we had, was going to be upwards of $250,000-$300,000. I couldn’t justify doing that,” she says, leading her to ultimately close the self-service laundry business her mother started.

In contrast to these costs, she explains that her venture with Laundry Jenie was more cost-effective, as the overall unit cost less than $100,000 to purchase and have it shipped and installed.

“You’ll spend hundreds of thousands of dollars opening up a full-sized Laundromat in equipment costs and updating costs and rent [whereas] these are self-contained [and] already assembled.”

OUT OF THE BOX

The overall laundry kiosk is shipped, self-contained and pre-assembled in a “housing unit,” according to Lautzenheiser.

“All wired and plumbing [are] installed, so basically all you [have] to do [is] set it down and hook it up to the power and plumbing lines. It’s come pre-wired, basically,” she says.

“They can be installed pretty much anywhere, as long as there are existing water and electrical lines,” Lautzenheiser adds.

The overall kiosk measures 4 meters by 2 meters and is 2½ meters tall, according to Lautzenheiser, and can be programmed to accept cash and credit/debit cards.

The Laundry Jenie provides two washer options: a 40-pound-capacity machine, which costs $8 per cycle, and an 18-pound capacity washer, which costs $4. The dryer costs $1 to operate for 15 minutes.

The unit also comes with remote capabilities, according to Lautzenheiser, that allow her to monitor the payment system and the unit’s overall sales performance.

To curb any form of vandalism, the units feature security cameras, according to Lautzenheiser.

“It also has the capability to alert [customers], through text message, when [their] laundry is done, so it’s not sitting there unattended for a long time,” she adds.

Because of its minimal installation requirements, the Laundry Jenie can be installed anywhere, Lautzenheiser explains.

“In Europe, the main places you’ll see them are in grocery store parking lots, so someone could load laundry, do some shopping and come back out [to retrieve] their laundry.”

The Laundry Jenie would also fulfill a need for laundry customers who reside in remote areas, Lautzenheiser says.

“What my thinking with the laundry kiosk was that these were perfect for areas where the population can’t necessarily support a full Laundromat [like] rural areas where people have to drive 10, 15, 20 miles,” she says. “If this was at their local convenience store or local grocery store, they could just go right there.”

Overall, Lautzenheiser is excited about the venture’s possibilities.

“I think it’s something that would kind of revolutionize the industry as far as getting people opportunities and ways to expand their own brands,” she says.

In terms of her goals for the Laundry Jenie, Lautzenheiser has her eyes set on growth and expansion.

“I’d like to franchise the Laundry Jenie brand and expand all throughout the state, especially in the Southeastern United States. If I could expand nationally, that’d be awesome, but for the first couple of years, the primary goal is to establish the brand and set up more units, get it recognizable and start franchising.”