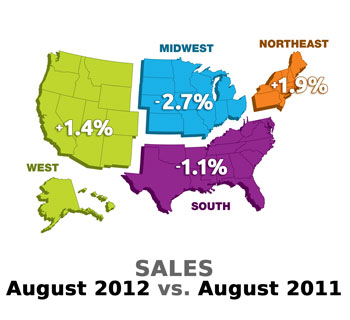 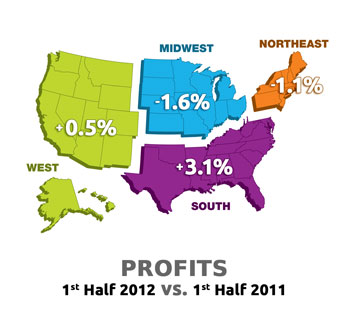 CHICAGO – August coin laundry sales reports were a mixed bag, with the West and the Northeast reporting increased sales from one year ago and the West and the Midwest garnering greater profits for the first half of 2012, according to the latest AmericanCoinOp.com StatShot survey.

Self-service laundry operators in the West reported August sales were up 1.4% compared to August 2011, and that their first-half profits were up 0.5% compared to the first half of 2011.

“I attribute the increase in business to the remodel of one of my three locations, which was up substantially after the remodel,” says an owner from the region.

In the Northeast, August 2012 sales were up 1.9% from the previous August while first-half profits for this year were down 1.1% compared to the first six months of 2011.

“Our northeast part of western Pennsylvania is reacting to the economy like the rest of our country…scared! Help us, Lord,” offers one store owner. Another in the Northeast says sales have been consistently flat since March. “Customers are getting squeezed as their state and federal assistance is cut back or expires. Volume continues to shift from larger to smaller washers.”

Store owners in the Midwest saw first-half profits rise 3.1%, while their August sales declined 1.1% from the previous year. One operator says his/her closest competitor closed in March. Another attributes difficult market conditions to high unemployment and too many operations offering free drying.

All of the numbers were in the red for operators in the South: August sales were down 2.7% and first-half profits declined 1.6% compared to January-June 2011.

Audience members are invited to participate in these unscientific surveys, which are conducted online via a partner website, on a regular basis. All self-service laundry operators are encouraged to participate, as a greater number of responses will help to better define industry trends.