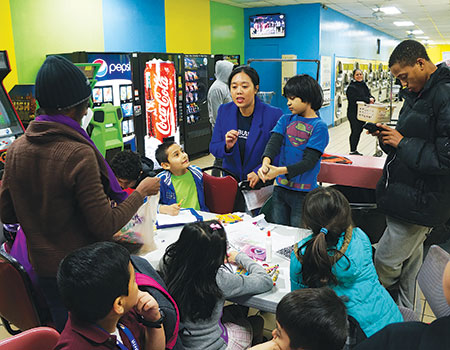 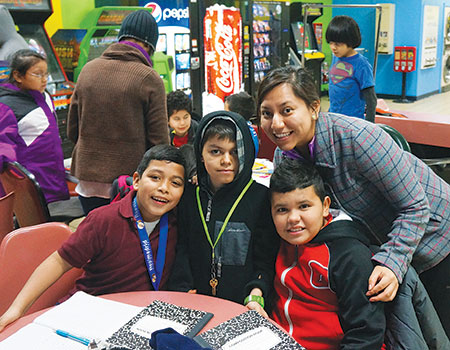 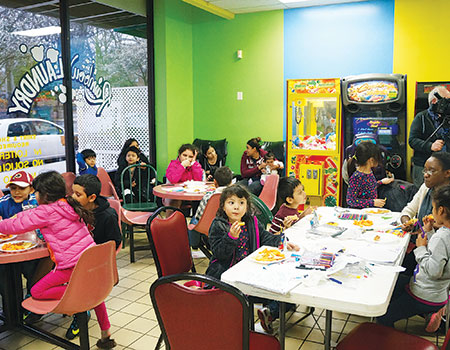 Amid the washers turning and dryers tumbling, a new sound can be heard—the sound of learning, as business school students from neighboring Washington Adventist University (WAU) have recently begun helping local schoolchildren with their homework here every Thursday night.

Though it may not seem like it, the one-hour, once-a-week tutoring program is all part of the business school’s efforts in rehabilitating the Laundromat, which operator Nok Kim has owned for almost 10 years.

Kim has faced various operational challenges since dropping his Laundromat from its parent franchise in recent years.

But through the projects that the business school has helped him with in the past year, Kim has been able to slowly build up business and utilize his store for more than just a laundry.

As the group worked to reintroduce Rainbow Coin Laundry to the community, it also began forming ideas on its next project for Kim’s Laundromat.

In October, the group decided to survey patrons on what they’d like to see at the laundry among five different services/amenities, according to Kimberly Pichot, WAU business school associate professor and chair.

A kid’s play area and drop-off and pick-up services were among the possibilities, but the most popular among them was after-school tutoring.

“Hands down, the clientele said, ‘If we have to choose one thing, it’s tutoring for our kids,’” says Pichot.

The offering piqued the interest of customers, particularly as Rainbow Coin Laundry caters to a high immigrant population of Hispanics and Ethiopians, according to Pichot.

The group put up posters and fliers to advertise the free tutoring program, which officially began in January.

The one catch—the children’s parents had to be doing their laundry.

The program had a soft start.

“We started with most of my customers’ children. [On the] first week, we had seven or eight children,” says Kim.

But then, more and more children started coming.

“[The children] bring their own homework and our college students sit down and go over their homework with them, and read over the directions and guide them,” says Pichot.

“If there are kids who come in, whose English [skills] are limited, then we’ve got these booklets that are age-appropriate that we work with them and get them engaged in more conversation,” she adds. “Sometimes one of my students will sit and read with the kids and listen to their reading and help them.”

Typically, four to five college students will be on hand to help with tutoring, according to Pichot. So far, the group has seen, on average, more than 12 students come in every Thursday night.

Community involvement in the program has grown, as members have donated school supplies. In the fall, the group plans to collect backpacks and even more school supplies to donate to the children.

“We realized that, from the parent’s point of view, it was an instant success,” says Pichot, who adds that parents have also expressed interest in adult tutoring programs at the laundry.

“That’s something that we want to add in the fall, as well. The adults want conversational English [lessons].”

‘THE BIGGEST DANGER IS OVER’

How has the revamp and tutoring sessions impacted Rainbow Coin Laundry’s sales?

“I can’t give you exact numbers, but he has turned around, and he is breaking even,” says Pichot. “Our next step is to get him to a profit. So, the biggest danger is over, but we still have to help him with what is going to be sustainable long-term.”

The next project the group is working on with Kim is a cost analysis of replacing the laundry’s equipment. Currently, Rainbow has approximately 96 machines, according to Pichot.

“The cost of water in our county has increased drastically, and his machines are older machines that use more water. So, we started a cost analysis to see what it would take to, maybe on a long-term basis, replace those machines,” she says.

The group is also working on launching a website for Rainbow Coin Laundry this summer.

“We want to get his website up and running this summer because our next step is going to go for corporate accounts,” according to Pichot.

“We feel that if we’re going to offer that, number one, he’s going to have to do pickup and delivery for his business. He’s going to need branded materials, and it needs to feel like a well-established business.”

A web presence, according to Pichot, can best communicate the laundry’s offerings to prospective customers.

“This summer, we want to get the pieces in place [so that] when the students return in the fall, then we would launch the campaign to go out and look for those accounts,” she says.

Pichot explains that the student group will generally work with a company for two to three years.

“Within those three years, we would expect [him] to be at a point where he’s learned everything he can from us, things are running smoothly, [and] he has his next step,” she says.

Despite any challenges, Pichot says it’s been a pleasure working with Kim.

“Despite what he’s been through, and the struggles with his business, he’s always positive, and my students have gained a tremendous amount of appreciation from that,” she says.

“He has been 100% willing to work with us every step of the way. I could tell you that, as a consultant, that’s rare. Frequently, you have resistance, and we don’t. We have an amazing relationship with him.”

The experience has been a crash course in the Laundromat industry for Pichot.

“It’s a learning curve for me to learn what the cost structuring is, and how many loads it takes to break even. It’s been fascinating,” she says.

Pichot adds that the “humanitarian reach” that the Rainbow Coin Laundry project has had in its local community is one that every small business should emulate.

“No matter who your clients are, they’re going to have needs that go beyond what you offer,” Pichot says.

“I think it’s a model that we can really develop across America, because it’s also showing your clientele that it’s not all about you. It’s about what the client needs and what the clients are looking for.”

Missed Part 1 of this story? You can read it now HERE.