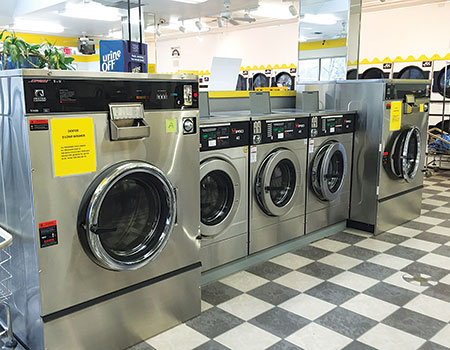 ROSEBURG, Ore. — Jock Jouvenat’s Value Clean Laundromat was created out of the remnants of a 1970s-era Laundromat that existed as one of five commercial units in the property Jouvenat bought in 1998. New to the industry then, he reached out to Western State Design (then known as Western Cascade) for guidance in renovating the space and acquiring new laundry equipment. After years of planning and renovation, Value Clean was opened in May 2001.

Through the years, Jouvenat gradually increased Value Clean’s laundry capacity, both by adding Dexter laundry machines for general use, as well as behind the counter when he established a drop-off laundry service. Nine years ago, he started acquiring larger machines, the first of which were three Dexter T-50x2 Stack 50-pound dryers that are still operating today. A year and a half ago, after consulting with WSD’s Jim Wright, he added a Dexter T-80 Express 80-pound OPL dryer behind the counter for drop-off laundry service.

He attended Clean Show 2015 with the intent to acquire two more 75-pounders. However, upon learning those particular machines were no longer being made, Jouvenat took Wright’s recommendation to purchase two Dexter T-1450 90-pound Express machines instead. The high-capacity washers fit within his existing space and have been in operation since September.

“We have received nothing but glowing reviews from our customers, who love how their laundry comes out virtually dry, which means they spend less total time doing laundry,” says Jouvenat.

He finds the new machines aesthetically and operationally pleasing, plus he likes the extra capacity because it means that the drop-off laundry doesn’t get held up in the queue for one of the 75-pound machines.

Even though he has added capacity with larger machines, he says “the 40-pound machines remain the workhorses of my store.” Having said that, total turns on his larger equipment has increased from a year ago, while remaining constant on smaller machines. “The result is that my revenue has actually increased, without any additional advertising or marketing.”