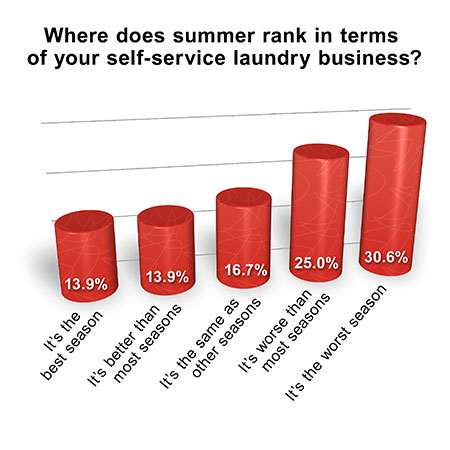 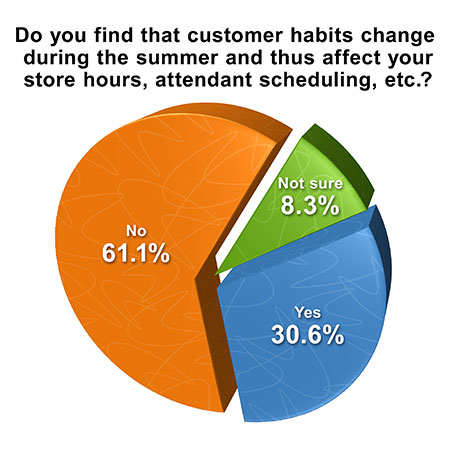 CHICAGO — In the self-service laundry business, it’s not unusual for the average Laundromat to suffer a slowdown during the summer months.

This quarter’s American Coin-Op Your Views survey addressed this very topic, and more than half of vended laundry owners and operators who were polled say that summer is either worse than most seasons (25.0%) or is the worst season (30.6%) in terms of generating business. Roughly 17% say that summer is the same as other seasons, and equal shares of 13.9% say it’s either better than most seasons or it’s the best season.

Some 31% of respondents say that customer habits change during the summer and thus affect their store hours, attendant scheduling, etc. Roughly 61% don’t find that to be the case, and 8.3% are unsure.

Among those who believe that customer habits change, many commented that the shift from spring to summer typically means that patrons are wearing fewer and less bulky items of clothing, which translates to smaller loads at their laundry.

One respondent says summer actually brings in more business: “Most people are too busy to do their laundry, so our laundry service booms during the summer.”

Despite the business slowdown that is commonly connected to the summer season, virtually none of the owner/operators surveyed (97.2%) run summer specials or promotions. Only 2.8% offer specials on things such as “sleeping bags and ‘return from summer camp’ drop-off,” or offer free detergent on certain summer weekdays.

Summer seems like a perfect time to do major store maintenance, and many owners and operators polled agree. Painting (both inside and out), deep cleaning, landscaping and parking lot sealing/repair are common summertime tasks, according to the survey. In a few cases, owners chose summer to undertake a complete remodeling or refit.

When it comes to dealing with child-related issues, like kids screaming or running throughout the store, 54.3% of owners/operators believe these issues are most prevalent during the summer, while 40% believe they are not. The remaining 5.7% aren’t sure.

One-quarter of respondents say they receive more customer complaints about store temperature in summer than other seasons. Roughly 72% do not, and 2.8% aren’t sure.

As for what respondents find most challenging about running a self-service laundry during the summer months, dealing with higher utility bills due to air conditioning or struggling to keep a store cool while customers travel in and out were common answers. And with schools not in session, seeing an increased number of children and youth was also frequently mentioned.

American Coin-Op’s Your Views survey presents an unscientific snapshot of the trade audience’s viewpoints. Due to rounding, percentages may not add up to 100%.