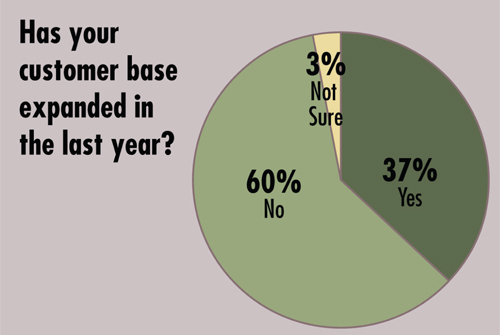 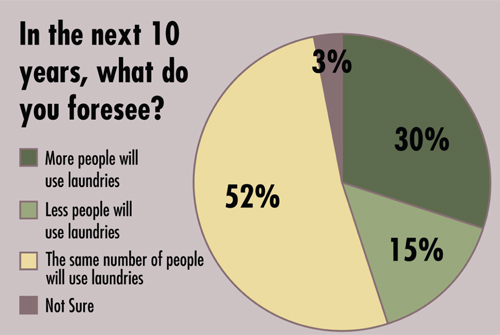 CHICAGO — “More people will be turning to coin laundries because they have less free time to waste on doing laundry at home.” You’ve probably heard that before, but are operators seeing any evidence that this is true?Sixty percent of respondents to the latest Wire survey say their customer base hasn’t grown in the last year. Thirty-seven percent say their customer base has expanded. Three percent aren’t sure. When asked if more people are using laundries in their area, 55% didn’t see any growth. Twenty-six percent said there are more customers using their laundry as well as other nearby stores, and 19% are not sure about the number of new customers.SAVING TIMEOne third of the respondents believe customers looking to increase their free time by cutting back on home laundry time have tried their stores once or twice recently. Forty-eight percent haven’t seen these customers, and 19% aren’t sure about this.ATTRACTING CUSTOMERSIf you didn’t have to use a coin laundry, what would draw you to a store? The No. 1 response (38.5%) is the ability to reduce your washing/drying time. Other top responses include “a bright, clean store” (26.9%) and “unique equipment to handle a variety of needs” (23.1%).TURNING CUSTOMERS AWAYForty percent of respondents believe that people won’t give coin laundries a try simply because they have access to washers and dryers at home. As for other reasons why people won’t give your store a try, it’s a mixed bag. Three reasons split the remaining vote: “Coin laundries are dirty,” “People don’t want to ‘mingle’ with others,” and “People are creatures of habit.”A BRIGHT FUTURE?While most operator haven’t seen a short-term gain in customers, are they still optimistic about what the next 10 years will bring in terms of business? Fifty-two percent of respondents see about the same number of people as today using laundries, while 30% believe more people will visit stores in the next decade. Fifteen percent see a decrease in the number of customers, and 3% aren’t sure about the future.