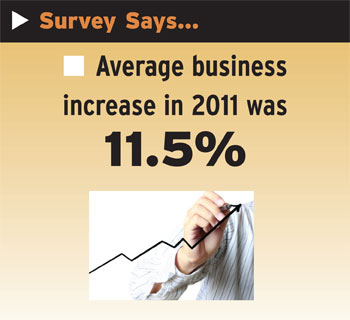 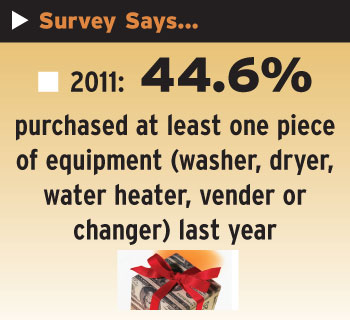 CHICAGO — How do you think your self-service business compared to others in the industry last year? Did you have a good year or a bad year in 2011? How does your pricing compare with others?

American Coin-Op’s annual State of the Industry survey offers you the opportunity to compare your operation to others in the industry. It focuses on 2011/2012 business conditions, pricing, equipment, common problems, turns per day, and utilities cost.

In instances where respondents were asked about 2011 business results, they were given the opportunity to state that their results were up, down or unchanged. This is a slight departure from previous surveys that asked only if their business results were up or down. Keep this in mind as you are making comparisons to previous years’ polls.

In 2011, nearly 45% of respondents saw their overall coin laundry business increase from 2010.

Here’s a closer look at the 2011 business increases (these figures relate to those reporting an increase, not all the respondents):

Approximately 35% of respondents saw their business decrease (in gross dollar volume) last year. In our survey of 2010 business, 58% saw a drop in business. The percentage was 59.8% in 2009.

Were the losses consistent last year or did they vary? Here’s a closer look at the 2011 business decreases:

Approximately 20% of operators reported their 2011 business was unchanged compared to their 2010 results.

Overall, these results continue to reflect year-to-year improvement on average. The number of operators reporting an increase in business was up slightly from last year, as was the average business increase.

In a culture built on saving time and intent on finding ways to free up that precious commodity, drop-off service would look to be a popular choice for self-service laundry customers. But do the numbers bear that out?

Did drop-off service improve in 2011 or do customers still consider it a bit of a luxury?

The average drop-off-service business increase is 17.3%, four points higher than 2010’s increase of 13.3%. It should be noted that a handful of respondents reported an increase of more than 20%.

Roughly 24% saw a decrease in drop-off-service business. That is much lower than in 2010 (53%), but that could be attributed at least in part to survey-takers’ ability to list their drop-off service business as being unchanged.

Nearly 45% of respondents said their drop-off service business was unchanged from 2010.

Check back on Monday for Part 2: Washer, Dryer and Drop-Off Service Pricing