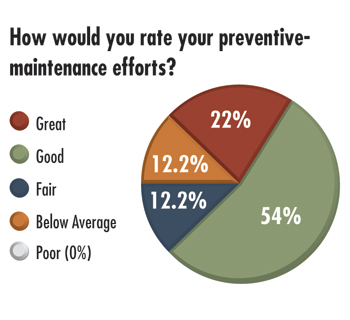 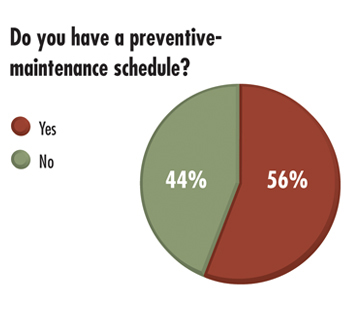 CHICAGO — There are few complaints when it comes to equipment and repairmen, according to the most recent Wire survey.

TOP-NOTCH PERFORMANCENinety percent of respondents are satisfied (I have no complaints, 36.6%; there are only a few problems, 53.7%) with the performance of their washers and dryers. Seven percent believe they should have fewer problems, and only 2% have many equipment complaints.PREVENTIVE-MAINTENANCE PRACTICESThere may be some correlation between equipment satisfaction and preventive-maintenance (PM) efforts. Twenty-two percent rate their PM efforts as “great,” while 54% categorize them as “good.” Equal numbers (12.2%) rate their efforts either “fair” or “below average.” No one called his or her PM efforts “poor.”Fifty-six percent of respondents have a PM schedule, while 44% simply deal with problems as they arise.GETTING THE JOB DONEWhen it comes to doing basic repairs/PM at the store, how much of the work do you do? Eighty percent handle all (46%) or most (34%) of the work. Fifteen percent only handle a task or two, and 5% have someone else handle all repairs or PM.Respondents were also asked to grade their repairman (based on ability and dependability). Only two letter grades were selected from the A-F range. Thirty-nine percent say their repairman deserves an A, while 15% say a B is fitting. Forty-six percent don’t have a repairman.HORROR STORIES?For some, the mention of “repairs” equates to “disaster.” Respondents were asked to describe the biggest equipment repair “disaster” at their store, whether they or someone else was responsible.The No. 1 problem dealt with washers needing bearings jobs. More than a quarter of respondents mentioned this problem.The most serious problem involved a steam boiler. “I was repairing a leaking tube on my steam boiler,” says one respondent. “When I removed the plug in the tube, the boiling hot water still had a little pressure behind it, and splashed on my arm and face, causing second- and third-degree burns.”While the American Coin-Op Wire survey presents a snapshot of the audience’s viewpoint at a particular moment, it should not be considered scientific.Subscribers to the Wire e-mails — distributed twice a week — are invited to participate in an industry survey each month.